“One Smile At A Time” – An Exclusive Interview With Comedienne Sneha Suhas..!! 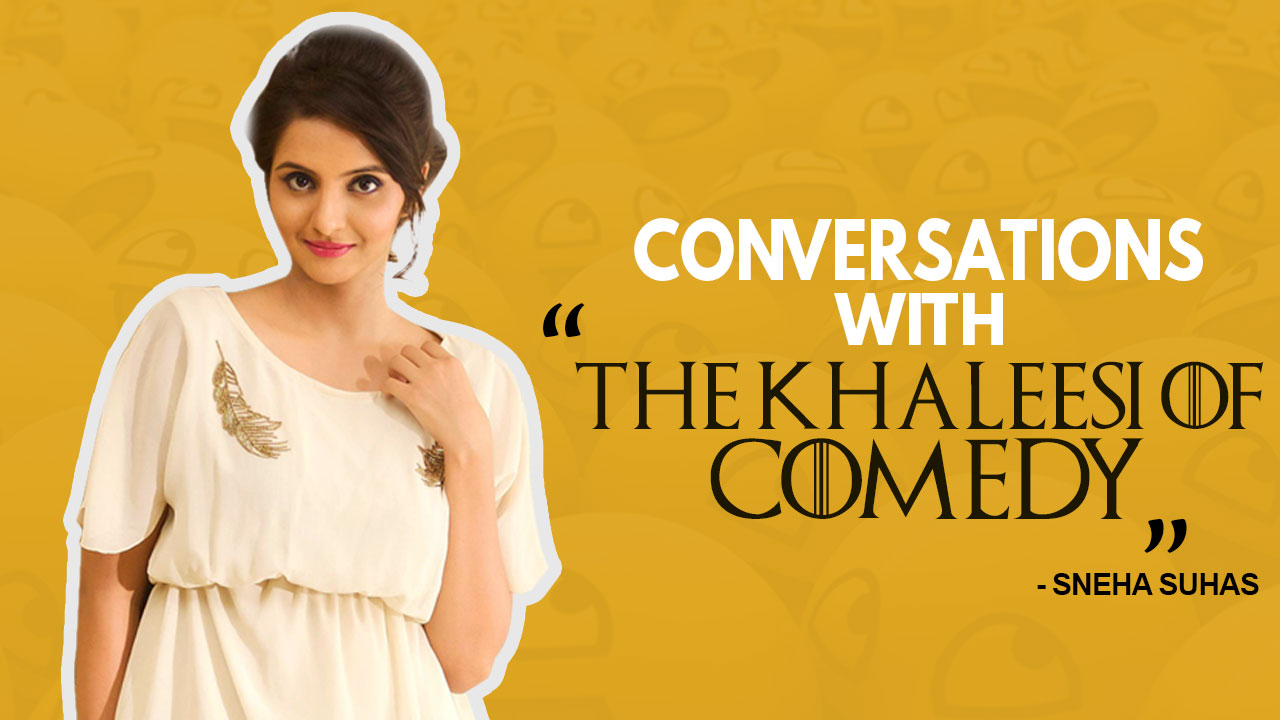 “Comedians are people who embarrass themselves in style.” -- A.D. Posey. This perhaps remains the best definition of being a comedian in this age. Comedy an art which requires extraordinary will to observe and articulate, has had some incredible ambassadors over the years. In India the so called comedy scene exploded in the form of stand up setups, and made superstars of talented observers. Sneha Suhas the artist in question  here, remains the youngest torch bearers of the art. I had the opportunity to talk to, this most promising artist to define the circuit, in Bengaluru in the recent times and got to know more about what went into making laughs consistently…

What does Sneha stand for? In the sense how come you chose comedic stances to express yourself? And was it always something you wanted to do?

It wasn’t always something I wanted to do, all I knew is I wanted to be on stage, I was there since the age of 6, I’m a trained dancer, learnt Bharatnatya for 13 years, did theatre. But I felt those were restrictive. When I danced I couldn’t talk and theatre allowed me to stick to the script. But I had so much to say, hence comedy, it’s a one woman show, whatever I do on stage, only I’m fully accountable for. I’m also a model and actor and I love being in front of the camera but stand up comedy really let’s me be myself, no make up, no dialogues. Just my own story.

Every Kannadiga in Bengaluru

You have as an artist always stuck to the local flavour of comedy or regional comedy per se, now was that a conscious decision ? Also what do you look at  while preparing your material or mannerism in deliver humour?

India being a diverse country can never have a common reference which can be used in all states of India, besides I’ve lived in Bangalore all my life, I’ve not stuck to the local flavour, the local flavour has stuck to me! I try to be as genuine as a style. Honesty really helps you connect.

Many at times we look at comedians going for a particular theme/genres in their acts? Do you look for any such specifications? What would be the topics or genres according to you, which are bound to leave the audience in splits. Minimum guarantee that is.

Not particular, I talk about things I strongly feel about. It need not be an important issue to someone else but I make sure I express how good or bad I feel about it. My set has a variety of things which I’ve personally experienced and feel strongly about.

How important is it for a comedian to actually know his limitations, given the fact that humour like common sense is highly subjective? Is it a good practise to not know the bounds?

What I speak is only through personal experience and my perspective. I don’t believe in jokes which hurt one person to make the other ten laugh, I don’t make jokes with cuss words or celebrity references just to get easy laughs. Jokes should leave you laughing along with a triggered thought. That’s how I want my jokes to be.

10 ways to annoy a Banglorean

In the past few months, you’ve been involved in collaborative shows around major cities, which delivered great appreciation.. Is it truly important then to go for such collaborations in the present age of comedy. Could you probably walk us through how any one of your collaborations happened ?

I’m a part of a collective called Evam Stand Up Tamasha, they have helped me as an artist to gain much visibility and experience and perform at public as well as corporate shows. As artists they all back each other up, I’m  also the youngest in the group, after a show they’ve always told me what went well and what could’ve gone better. Audience will tell you if it’s good or not through their laughs. But what went well and what didn’t can only be analyzed by who are at this art form for much longer than I have been. It’s good to have a support system.

Who is that one person ( Indian or Otherwise) that always leave you in splits. Who does one Of India’s most promising comedy stars finds inspiring.

People alive? Jim Jefferies. George Carlin, he died years back, but his comedy makes you laugh even today.

When you want to go for a project , what are the first five things that you want to be decide upon? Also now that you are into serious business of comedy  how has life changed in say the last five months or so?

If you mean a show, I need seated Audience and a good stage set up with a decent mic and audio system. That’s a basic minimum for any stand up comedian. I’ve met a many amazing people, since I’m still starting, people I’ve to learn from and things I’ve to learn are a lot. It’s been a fun journey. A funny journey actually. Back to your story, where does the story of Sneha Suhas start at. What exactly triggered the comedy genome in yourself.. If you could go back in time to change any given day of your life, would there be any change at all.

Like I said, I knew I wanted to be on stage, the other forms of art felt restricted and always had a mask. But this is just me and my stories and thoughts. It’s very liberating in terms of expression.

You’ve been appearing and performing comedic greatness all over, but what would your life be, if you weren’t into this preferred field of work. If not this, what else.

I’ve always been interested in English literature, so if not this then I’d probably be a lecturer. Whatever let’s me address a crowd gives me a good kick.

Any advice that you would like to give to the budding artists that want to make it big in this preferred arena? Now that you are performing at the Masala Mayhem Collaborative Event, what are your thoughts on it?

I’m a budding artist myself, I tell myself to never give up, there will be great shows and there will be ones after which I’d want to hide my face in a hole. But I make it a point to take both of them with level headedness and never get carried away by either. It’s just a part of the job. You have good days and bad, here, all people get to see it. That’s all. So the Hyderabad comedy club is being launched with this festival! Pretty excited and it’s also my first time in Hyderabad. So fingers crossed.