[VoxTalks] Ravikanth Perepu : The Man And The Story Behind The Modern Cult Thriller ‘Kshanam’ 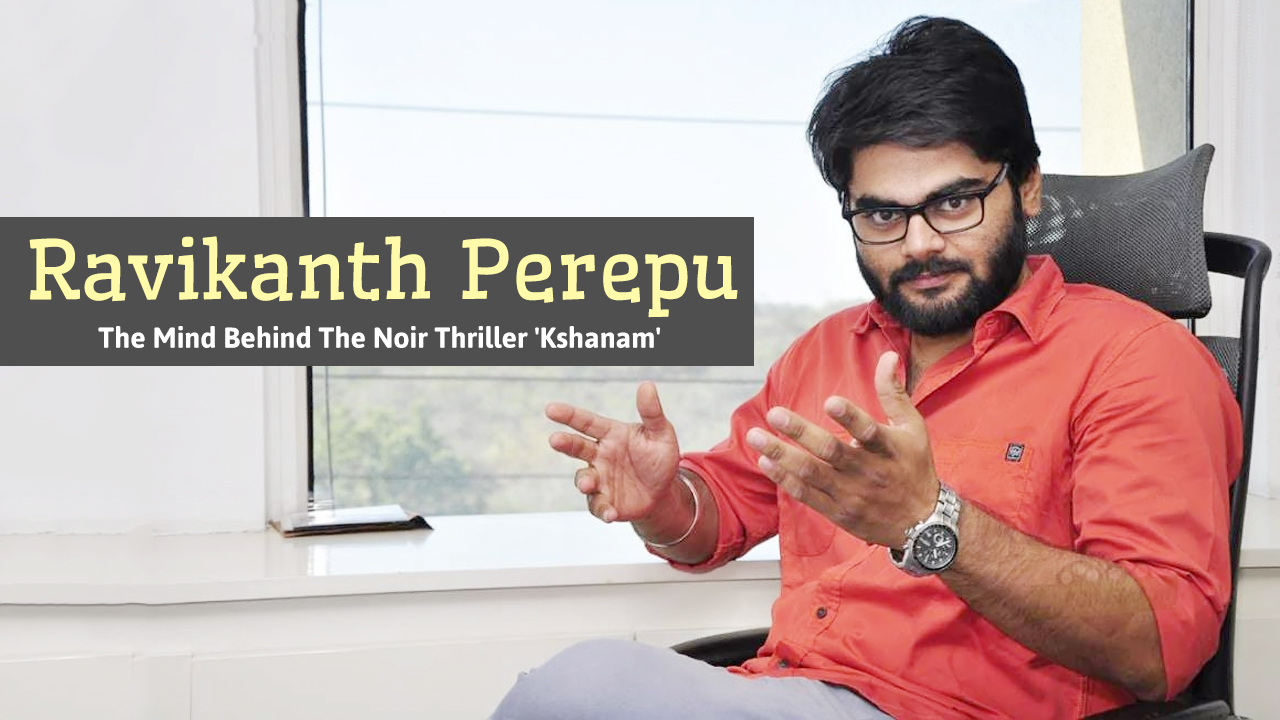 Last year, it was by accident that I ended up entering screen 3 in PVR cinemas, Punjagutta. When I say accident, I don’t mean that I entered it by mistake, but rather as the third option. You see, I was supposed to go to this English flick, which I don’t even remember now. As fate would have it, I had missed its start by a good fifteen minutes, and I hate going in after the start credits. And so, here I was, standing at the ticket counter, (yeah I don’t particularly use BookMyShow, old school lad you see), contemplating my life and movie choices. The guy at the counter told me that a Telugu crime thriller which was gaining much acclaim was starting in ten minutes. I had my doubts, but then hey I had bought my popcorn, and I wasn’t gonna waste that. And so I went in, to watch Kshanam, a movie by Ravikanth Perepu.

And when I walked out, I knew this was something incredible. The twists and the turns, the investigative narration, and gripping characters, the movie had it all. I wondered if it would work so well for the traditional movie goers in Telugu. Afterall, the movie had a story which was parallel to David Fincher movie, if I may say so. But then, in a month, the movie was declared both a commercial as well as a critical hit. And the rest, as they say, is history. We after a year of Kshanam’s release got in touch with the man behind it Ravikanth Perepu and got talking about changing the face of Telugu Industry, one story at a time. The excerpts of it follow…

It is imperative that we start this discussion with the trend changer movie of the recent times, Kshanam. Could you tell us briefly as to how the story of Kshanam struck you? Here is a thriller story that not many producers would take up right away. So when you were drafting up Kshanam did you know it was going to be a huge risk?

Sesh (Adivi) came up with the plot of the story. More than the thrilling part, the emotion of the whole film is what hooked me from day 1. We started writing the screenplay from there on. Initially, the plan was to make Kshanam for film festivals. Wanting to produce it ourselves, shoot it at our own convenience. But when we finished writing, the script had a universal appeal. Yes, it was a huge risk. But we were willing to take it up. The very first draft of Kshanam was darker, more grungy.

You have been recently nominated for The Filmfare Award For The Best Director. How do you feel about it? And looking back, why do you think the audience fell in love with Kshanam, although it was a highly unique concept and was not the traditional love story which our audience usually go for?

I feel privileged to be nominated at The Filmfare, but honestly, my job is to make films and move on. Award functions have been a great platform to build your PR (to me personally). I think the audience was craving for something new, something which breaks the routine storytelling patterns and the cinematic rules. Love stories are universal. There is no isolation for love stories in the future as well. They just have to be told well, like Pelli Choopulu. Films like Kshanam still have a lesser target audience.

Talking about your association with Adivi Sesh, in our research we’ve found that you’ve worked with him even before Kshanam. How do you describe the rapport that you two have? Adivi Sesh has been your partner in developing this story for Kshanam. Now we’re curious, how do you maintain a distinct balance between the actor who needs to play by the script and the man who is writing it? Is it hard or easy, to pick up both writing and enacting a role?

If not for Sesh, Kshanam wouldn’t have happened. He set the project up. He had a lot on his plate while making this film. We did fight a lot. But the best part is that we were only fighting to make the film better. Beyond the egos and personal differences. It’s a tough balance to maintain, especially when he’s acting, executing the production and having written the script. Both of us had the advantage of having Mr Abburi Ravi for the dialogue part. He is a gem. He brushed the whole screenplay to the extent possible. We didn’t have to worry much about script while we were shooting.

One thing that critics have lauded about Kshanam was its quirky casting. Be it Anusuya Bharadwaj as a top cop, Rajesh as a hot-headed SI, and Kishore as one with the grey shades. And of course Adivi Sesh as a man against all odds. Now as a Director, could you walk us through the process of Casting these brilliant people in roles they’ve never been seen before? What were your thoughts while taking them on board?

One word, Expectation. Being a debutant director I had the biggest advantage of people not knowing me nor my work. I was careful in making sure the actors who are playing their respective roles didn’t do something like that in their past. I wanted the film to be a clean slate. Everything is new, and something you expect never happens in the film too. That was the thumb rule for casting, script, trailers etc.

Moving beyond movies, What’s story of Ravikanth Perepu, before success happened. Where do you hail from and what makes you click as a storyteller? And are you someone who prefers the genre of films which are thrillers and hard hitting, or is it just one of the genres you like? Which categories of movies do you really look to as a filmmaker? Whats your comfort zone per se?

I was born and raised in Vizag. The last decade has only been films to me. I never dreamt of anything else. No other career option while I was doing my Engineering. Yes, I’m a Chemical Engineer. I try to stay as true as possible to my stories and the emotions my characters are dealing with. I would never want to repeat a genre back to back. I’m doing a love story now. I don’t want to be stereotyped as the “Thriller” director. I would want to make a wide variety of films. Films that I enjoy watching in the theatre as an audience, more than a film maker. Except for horror, I’m comfortable with almost all the other genres.

You’ve tasted grand success with your debut feature. Do you think that binds you to deliver another great movie to follow it up? How do you cope up with the success? And how hard is it to clear out your mind, and think afresh?

Success and failures are temporary, but Films are forever. As long as we are telling good stories that can entertain the audience, nothing else matters. (PS: Entertainment is not just comedy, LOL). Yes, the success puts a lot of pressure on me. That’s the reason I take my own sweet time to make films because once they’re out you cannot change anything about them. By the time I finish one film, I start thinking about other stories. I don’t get stuck, that’s my strength.

The industry has been asking this question for quite a while now. What’s next for Ravikanth Perepu. What are your future plans and where do you think you’ll want to go on this journey as a filmmaker in the next ten years. Also, for aspiring filmmakers and short filmmakers, what advice would you give them in pursuing their career paths?

I’m doing a love story with a pretty much fresh cast. It is being produced by Rana Daggubati. Shooting is in progress. Ten years from now is too far a thought for me. I’m an easy guy and I just go with the flow. For aspiring film makers, I would advise them to stick to the audience instinct in them. The technology today is such that it has become very easy to make a film. But it’s a war to make a good film. Story telling is the key. Just focus on telling a good story. These unusual camera angles, visual gimmicks, expensive cameras etc. are secondary.

So that was Ravikanth Perepu, and his wonderful explanations to all our weird long questions. And more importantly, bringing to us a game changer of a film in the form of Kshanam. We need this guy to bring more incredible stuff to the table, and we await that with best wishes.

Until next time then, Be Incredible folks..!!