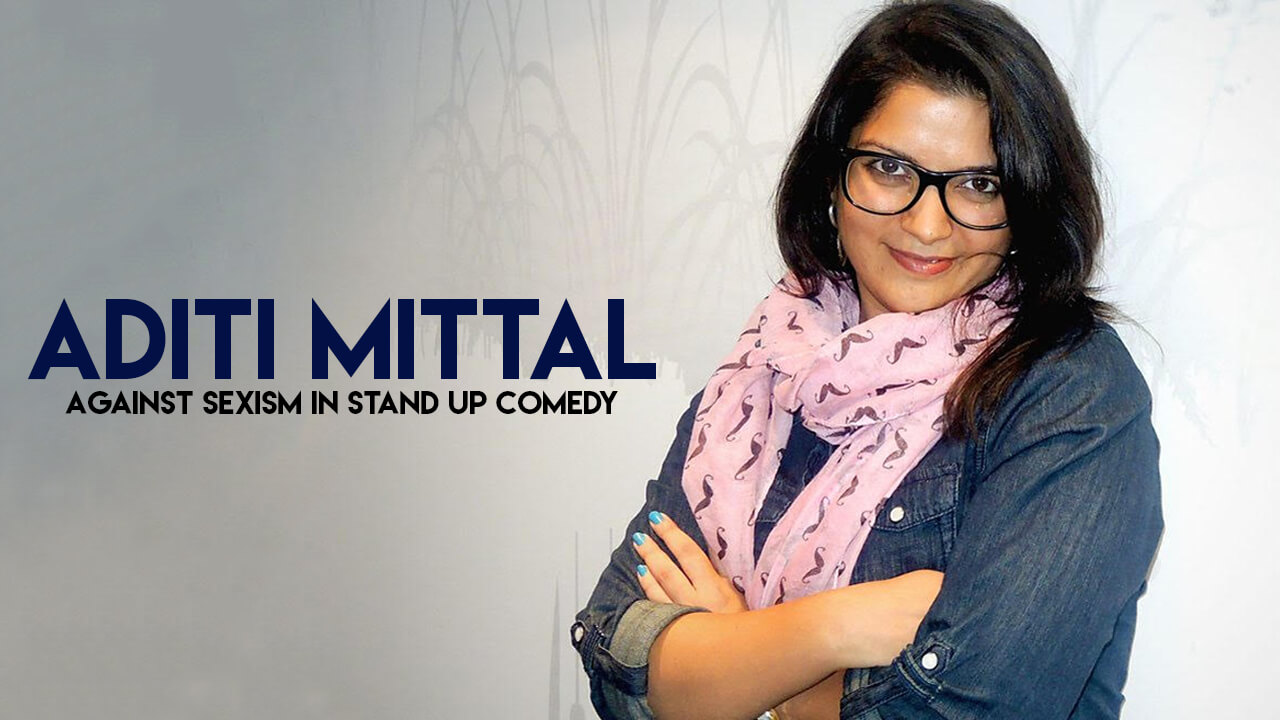 Aditi Mittal Brings Out The Prevalence Of Sexism In Comedy Performances

Earlier this year renowned stand up comic Aditi Mittal came out bravely and pointed out the double standards in the stand-up comedy industry. She also spoke of how sexism exists in an industry which boasts of bringing change through comedy, in a roundtable interview with other comics hosted by Anupama Chopra. It soon made a visible impact. A change in the dynamics was clearly visible in the stand-up circuits all over India, as more women-only nights were being hosted. More producers have since been coming out and producing more women group specials. Even well-known comics are teaming up with funny women to open their shows.

Aditi who recently released her stand up special “Things They Won’t Let Me Say” and became only the second Indian to have a stand up special on Netflix, was on a video podcast episode of Daniel Fernandes’s ‘You Started It’ along with fellow comedian Karunesh Talwar. When Daniel revoked her statements on the sexism in the stand-up comedy circuits and applauded her gesture of bringing out the issue to everyone’s notice, Aditi came forward and confessed to an incident.

While starting out in her comedy career about three years ago, a comedy producer who was also the host of the show introduced her as ” the best tits in the business” after which she lost her tempo that night and felt disgusted with his remark. She ran off after completing her time and had never spoken to him and cringes whenever that producer messages her.

That’s when Karunesh Talwar who couldn’t control his urge to keep it a hush spilt it out saying it’s Raouf Ganjee, a Kolkata producer who runs a banner named “The Kalkutta Komedians” which organises almost all the stand-up events in Kolkata and nearby cities. Karunesh also added that Raouf is the reason many women comics have quit performing in that area. He passes lewd comments even on the audience in the name of comedy.

Aditi added that after his repeated attempts to contact Aditi when she didn’t reply, Raouf’s last message to her was “are you gonna stop being a bitch and open your mouth you know for what, to come and do a show ” which she felt was way beyond the line. Karunesh Talwar urged all the watchers, his fellow comics and the open mic performers to not support such a misogynist who’s demeaning the art itself and find a more appropriate human being to produce the shows. After which they went on to talk about other things in the podcast.

These allegations were proven right when Raouf Gangjee came out in the open and accepted it on that same day. He apologized for what he did and said that he thought what he did at that time was funny. He said he was a stupid back then and now he’s a changed person altogether.

The Incidents Of Sexism Start Repeating

After around three months a similar behaviour was reported by one of the employees of the High Spirits Cafe, Pune against the owner, saying his gestures go beyond sexual harassment and the fact that the other employees are taking the owner’s side is beyond disgusting. Karunesh this time again stood by his stand and then announced that he wouldn’t be performing at a venue which doesn’t respect their own women employees. After around two days, of hearing about more experiences, Karunesh expressed his outrage calling out on the double standards of his fellow comedians on his Facebook page.

He wrote”Indian comics joke about inequality and oppression and then stay silent when it happens within our circuit. You would expect that all of us would immediately publicly boycott High Spirits and Kalkutta Komedians (whose owner Raouf Gangjee does very similar, super creepy stuff), but most of us have said nothing. This isn’t the kind of thing we can stay on the fence about. If we can’t take a stand about things that matter, then every word out of our mouths is worth absolute shit.”

After the post, many comics supported his stand, but a few comics who owe their careers to”The Komedians” stood their ground and defended Raouf Gangjee by vouching for his change in character since the time the events took place. The Accused Rouf Gangjee Speaks Up About The Claim

“I’d better say a few more words about exactly what happened with Addy Mitzy, as people are coming up with all kinds of bizarre theories. I first met her at the Comedy Store auditions conducted by Don Ward, who started the comedy boom in India. There she and I agreed to support each other and make sure we got selected etc. She and I actually did get selected by Don, who gave me a call, but I was not as serious about comedy (neither did I realize how big standup would become in the country, and told him Mumbai was just too far away for me to attend the regular training sessions he was prescribing at that time). Later I called her to Calcutta for a show. I assumed she was a good friend whom I could joke with and introduced her as having the best tits in the business or something to that effect. She replied that she was going to have sex with me after the show etc. This was done in front of an audience of hundreds of people. After the show, I paid her Rs. 40,000; a handsome fee at the time. She also asked me whether I would like to have a drink as we had briefly discussed earlier. It had not been a great show and I was not really in the mood for it so I said no. But I did assume she was a close friend with whom I could joke in a ‘sexual’ manner. Later when she stopped replying to me I asked several other comics to find out what the matter was, but didn’t get an answer. For years there has been no communication at all. I continue to believe she was indeed joking with me in an amicable way at the time but has now been ‘re-educated’ by people with ulterior motives who spend their valuable time theorizing about my horribly sexist nature or whatever. Even if I am wrong, when I did find out about all this (only a few months ago!) I apologized for my behaviour, reiterating that I had no idea my jokes could have been interpreted in this way. This is how it happened: if people come up with more colourful theories to which you need an answer, you can cut and paste from here. Best wishes to everyone.”

Whether what he did can be excused just because he apologized is up to the victim, and we shouldn’t and don’t have a say about it. But this post doesn’t explain his thought process behind the kind of absurd messages he sent to Aditi which went far beyond just joking phase.

Aditi Mittal Replies Back To The Aforementioned Confessional Post

This was Aditi’s reply:

Addy Mitzy – Best wishes to you too, you bag full of barfs. Don’t tag me in another post ever again trying to belittle me by mentioning how much money I got paid for the show as if it had ANYTHING to do with the fact that you’re a STUPENDOUSLY rapey human being. Stop tagging me in posts when I have not felt the need to even say your name in public for the past 3 years coz you’re literally THAT insignificant. Karunesh ‘C’ Talwar called your name out in particular and Daniel Fernandes is the one that made the money off the views on those videos- take your shit up with them. I get nothing from this apart from abuses from you and these hilariously lame attempts “maligning” my character (lol), and at you trying to make it look like you’re a victim while you dig yourself deeper into your creep hole. ONE more post from you with “I thought it was ok to say sexual things” and I will compile a list of all the stories/problems that every woman in comedy has had with you and I will take it to the police- then you can tag Mumbai police and talk to them about what you think is ‘ok to say in a sexual nature.’ You started this shit, and if you don’t stop it right now I will shut it down for you. These posts only prove that the things people are thinking about your character are 100 percent true. Sit down Raouff, you’re already occupying way more space than you deserve and the fact that you have been here all this while is a testament to how much the system support creeps like you. Best wishes.

The fact that Raouf posted the comment of Aditi Mittal on his post even though Aditi clearly mentioned she isn’t interested in his post and doesn’t want to do anything with it clearly raises only one question. Was Raouf’s apology really sincere or is he just like any other celebrity coming up with – ‘was- stupid -but-in- the- past- now- I’ve -realized’ syndrome.

But the real question here would be, as Karunesh Talwar claims in his post, do Indian comics really turn a blind eye when it comes to their industry? Do they really have double standards? Especially when they are the ones who are coming up with such driving opinions about the Weinstein case and the #Me Too campaign.

Related posts:
[VoxSpace Life] Delhi Is Choking : In A Curious Manner The Government Seems Unaffected By The Smog
Vellipomake Aka Ila Naa Jathaga Promises A Trend Changing Indie Feature
VoxTalks With InkscapeCo : The Community Driven Abode Of All Things Artistic..!