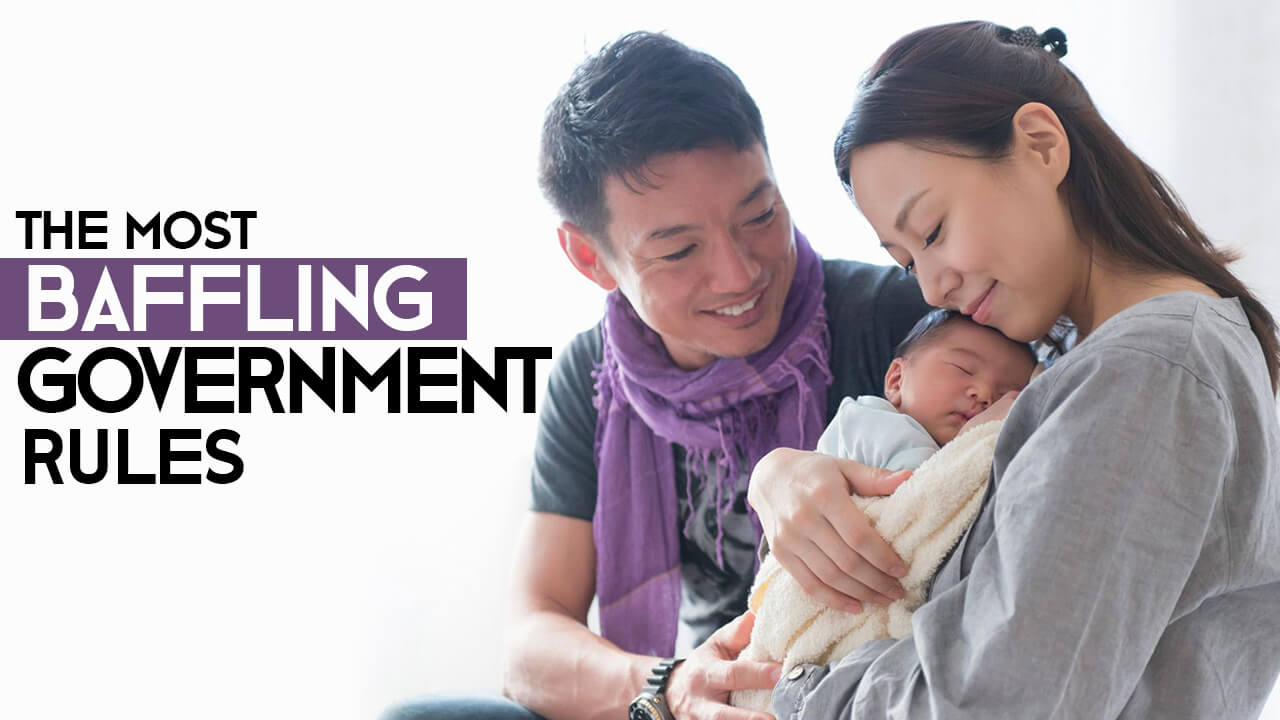 The Government Rules Which Baffle Everyone Literally

Mostly we have law-abiding, decent people in the whole world. While some countries have a higher crime rate, some have it lower. But essentially, we are all good people and we try to abide by the rules of our governments. However, sometimes the rules that the authorities pass are just too weird, to be honest.

Crying with the Handsome Man

You can actually hire some handsome men, in Japan, if you need company. A Tokyo-based company called “Ikemeso Danshi,” which translates to, “Handsome Weeping Boys,” according to Quartz offers this unusual service. The company supplies handsome suitors, who will watch a film with the customer and will wipe your tears too. Customers can choose the man as per their choice and have to spend about $65 per man. As per the founder of the company, the idea behind it comes from the concept that crying can be therapeutic and a person in misery needs and loves company.

Bhutan Has A Lot To Offer

The small-cosy country, in the lap of the Himalayas, is not for the weak-hearted, who can be easily shocked. If you ever visit Bhutan, you’ll not only be surrounded by its mountains and scenic beauty but also with wall paintings of floating phalluses. Yes, that’s right! To the predominantly Buddhist population of the country, this particular male organ symbolizes fertility and also fights off evil spirits.

Worshipping the primary sexual organ of males was started off with Buddhist teacher from the 15th century. He had claimed that he had fought demons with his “member.” Today, the portraits of penises have become more of a cultural symbol in the country than a spiritual one and they also attract a whole lot of tourists.

The good country of Russia had proposed laws in order to ban the “emo” culture. The anti-emo legislation had argued that the trend essentially promotes depression, social withdrawal and suicide. The bill describes “emos” as teens in black and pink clothing with studded belts, painted fingernails, piercings and black hair that “covers” half the face.” If Russian lawmakers pull it through, teens of Putin’s country will have to hang up their studded belts by 2020.

Sci-fi Fiction Lovers Will Be Disappointed In China

Gaming BANNED in China for 15 years!

Are you a fan of the TV series Dr Who? Well, I am sorry folks you cannot see it in China. In 2011, the State Administration of Radio, Film and Television in China started weeding out any and every form of entertainment that depicts time travel because they “lack positive thoughts and meaning.” Currently, it is censored in the country. The Chinese authority took the decision based on the assumption that showing time travel gives a false impression of history. They also believed that these are “Western products” and asked the TV channels to actually develop content that are “intrinsically Chinese.”

Micky Mouse Printed Currency Notes – How Cool Is That!

7 Facts about the tiny country of Niue

The tiny island of Niue, which might just have a meagre population of about 1,200, is famous for having a picture of Mickey Mouse on its currency notes. This South Pacific nation began producing quirky coins that feature “Pokémon” characters, Disney Princesses and “Star Wars” personalities, as part of the nation’s effort to bolster its economy and put the petite peninsula on the world map. In 2014, the most expensive coins of this country were made from 7.1 grams of gold. It featured Mickey and Minnie Mouse, Goofy and Pluto, and was retailed for $625. However, their denomination in Niue dollars was only $25.

Ethiopia Is Seven Years Behind The Rest Of The World

While China is against time travel, there is a country which needs it desperately. Ethiopia actually lives seven years behind the rest of the world. The nation’s calendar is based on its alternate calculations of when Jesus Christ was born. The Ethiopian calendar follows the belief of the country’s Christian Orthodox Church and is rooted in the Coptic or Egyptian calendar, which is about seven to eight years behind the mainstream Gregorian calendar. For this African country, September 12 is the start of their New Year.

Denmark has a law on Personal Names, which the government passed to protect children from being burdened with peculiar names that would have incurred future ridicule. The government here actually has a list of names and the parents, who wish to choose any other name out of the list are supposed to seek approval from the government.

Don’t You Dare To Wear Yellow In Malaysia!

"Don't Wear Yellow in August" performed by The Ruffs

There is actually a country on Earth which has banned its citizens from wearing clothes of a particular colour. The colour that didn’t go with the mood of the Malaysian government is Yellow. After protesters demanded the country’s Prime Minister Najib Razak’s resignation in August, following some corruption allegations, the authorities decided to disallow people from sporting the shade of sunshine because it was the same colour that the protesters wore. The directive order from the country’s government declared that the “printing, importation, production, reproduction, publishing, sale, issue, circulation, distribution, or possession” of yellow t-shirts are “likely prejudicial to public order.”

Chewing Gum Is A Strict No-No In Singapore

CHEWING GUM IS ILLEGAL IN SINGAPORE?!

In 1992, the then Prime Minister of Singapore Lee Kuan Yew had introduced a set of stringent laws, which included a rather bizarre one, i.e., the ban on chewing gum. The political leader’s beliefs were that gum would tarnish the country’s clean pavements and subway carts. As of 2004, pharmacists and dentists have been allowed to sell “therapeutic” gum to patients, provided they have medical prescriptions for it. Today, it is legal to transport a small amount of gum from other countries to Singapore for personal use, but the vending of it still remains unlawful. Leaving chewing gums as garbage incurs hefty fines in the country.

Top 7 Weirdest Laws that you will find only in France

You can marry a corpse in France. Yes, that’s right. However, bizarre it may sound, this law is an effective one in France. Postmortem matrimony has been legal in the country since the reign of Napoleon, however, it was only performed once in 1959, when a dam burst caused the death of around 420 people. A bereaved woman, who had lost her beau in the incident, had pleaded to marry him. However, in order to marry a dead person, the living person is required to prove in court that they both wanted to get married prior to his or her loved one’s death. They also need to get a permission from the family of the departed.