8 Year Old Asifa Bano Was Raped, Tortured And Killed Based On A Plan To Eradicate A Community In J&K 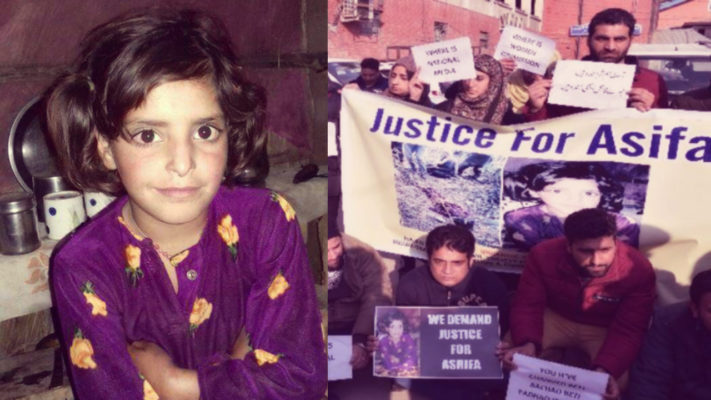 Asifa Bano – Sedated And Raped In A Temple

On January 17th, the body of Asifa Bano, an 8-year-old child, was found, beaten severely to death. Four days earlier, Asifa Bano had followed a man into the forest, who offered her help in finding her lost horses. Her lifeless body was found, in a horrific way thrown into the meadows of Kathua, in Jammu & Kashmir. She was raped repeatedly by two men and a juvenile. The police say, she would have been strangulated much earlier since her abduction, had it not been for the lust of these men to rape her for one last time. As per the initial investigation, Asifa Bano was so heavily sedated that she was hung by a thread for three days, as the men violated her in the most horrific ways.

In the months to follow, the incident has initiated a communal divide between the Hindu Community and the Muslim Community, as details of the case that perhaps Asifa Bano may have been raped and killed for a planned communal purpose emerged. As per the latest Police report, the incident might have been triggered due to the long-standing friction between the local communities in Kathua, the majoritarian Hindu community and the minor nomadic Muslim tribe of Bakharwal.

My Daughter Was Raped Out Of Hatred Towards Our People

Asifa’s father, Mohammad Yusuf Pujwala, told the New York Times earlier this month that he believes his daughter was killed by the Hindu men for the sole purpose of driving her people away.

And the investigation revealed it to be true. The details now emerging from the initial Police investigation, point to a planned incident to rape and murder little Asifa Bano. The Bakharwali girl was abducted and beaten to death, as a part of a planned strategy to forcefully drive away the residing minority of Bakharwal. The 15-page charge sheet filed this week by the J&K Police with the Judiciary Magistrate, states the names of a local Hindu priest, Sanji Ram, amongst others, as the main conspirator of this incident. As soon as these details went public, chaotic protests broke out across the state, driving a rift between the communal beliefs.

To make matters worse in these volatile times, the charge sheet also names two special police officers, Deepak Khajuria and Surendra Verma, who helped divert the case away from Sanji Ram, by destroying vital evidence. The special officers, along with investigating officers, Tilak Raj and sub-inspector Anand Dutta, allegedly took an amount of 4 lakhs from Sanji Ram, to destroy the evidence. Presently, these officers have been taken into remand for further enquiry.

The religious priest, Sanji Ram, who for years has overtly expressed his displeasure and intolerance towards the Bakharwal community, is now said to have employed a friend Parvesh Verma alias Mannu, his son Vishal Jangotra, and his juvenile unnamed nephew to carry out this heinous act. All of the accused have today been arrested.

On January 11th, it is now known, that the unnamed juvenile, as part of the plan, called his cousin Vishal Jangotra, studying in Meerut, to come back home. “If You Want To Satisfy Your Lust, Come Back” were the words spoken by the juvenile accused to his cousin as per the charge sheet. Five days later, the unnamed juvenile, lures Asifa Bano into the nearby forests on the pretext of helping her find her horses which have gone astray. She is then taken to the temple, tied up, sedated and raped by the three men, repeatedly for four days. Before leaving her out, the accused bludgeoned her to death. Her body was later found by the local shepherds.

In months to come, the protests have now swirled into the religious water, as it becomes clearer by the day that the crime was planned to cause a disruption to an otherwise peaceful nomadic community. As religions become propaganda, logics go for a toss. Today, Kashmir is burning because of its own intolerance. It would seem that the support for the crime is, unfortunately, getting stronger than the opposition for it. The Hindu community within the region of Kathua, today rally behind Sanji Ram.

Hindu activists argue that some of the police officers who worked on the case are, like Asifa, Muslims — and cannot be trusted, according to the Times. Dozens of Hindu women have helped block a highway and organize a hunger strike. “They are against our religion,” Bimla Devi, a protester, told the New York Times. She said that if the accused men weren’t freed, “we will burn ourselves.”

As the juvenile law, still tries to sort itself out, even post Nirbhaya rape incident in 2012 in the Nation’s Capital, today the prime accused in Asifa Bano case, a juvenile, enjoys the flaws of our system. On the other hand, the herding community of Bakharwal, fear that justice will be delayed and eventually denied, as the judiciary in the region comprises of major Hindu inductions.

Talib Hussain, a Bakarwal social activist working on behalf of Asifa’s family, told the New York Times that Bakarwal nomads for generations have leased land from Hindu farmers so their animals can graze during the winter. In recent years, however, Hindus in the Kathua area have campaigned against the nomads. Believed to be at the campaign’s helm is the accused custodian, Sanji Ram.

“His poison has been spreading,’’ Hussain told the Times. “When I was young, I remember the fear Sanji Ram’s name invoked in Muslim women. If they wanted to scare each other, they would take Sanji Ram’s name, since he was known to misbehave with Bakarwal women.’’

Don’t Bury Her Here – Asifa Bano Is A Mark

In the other detail which emerged during the incident, it is now known that after Asifa Bano was found, a dozen Hindu fanatics approached the Bakharwal settlement and her home. They warned them not to bury Asifa Bano in those grounds. Their logic was simple. If they buried Asifa Bano in that land, the land will automatically belong to the Muslim Community.

As the state burns itself in the communal flames, as loyalties are pushed to the limits, as accusations are showered as the hailstorms across the meadows, and as the humanity inside an empathetic heart suffocates itself to death, we come alive to a new day, in a nation now run by sentiments and not politics. Perhaps in time to come, Asifa Bano will be an entry into a long list of mishappenings, the so-called unfortunate incidents, as religious bigotry dances with its feathers, flourished. A deep-rooted hatred is in every heart today, not just in J&K, but everywhere. The question is are we hating the other faith? Or are we hating their hatred towards us? Maybe we will never find an appropriate answer to it. We are after all hating ourselves…

Related posts:
[VoxSpace Selects] Aaranya Kaandam : The Film Whose Wings Were Cut Off By The Censor Board
[VoxSpace Life] The Rickshaw Theatre Project : Bringing Theater To Thatched Houses In India
[VoxSpace Life] Mindful Sex : The Gateway To Happiness And Spiritual Connection