The Ministry Of Utmost Happiness: A Book True To Life & Closer To Truth 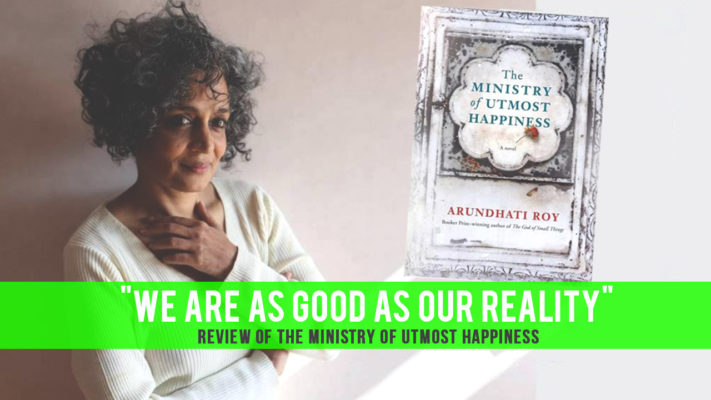 About The Author – The Ministry Of Utmost Happiness

Arundhati Roy is a well-known author, who is a Man Booker Prize winner(1997) for her debut book – The God of Small Things. She is also an activist and over the years has been a screenwriter and a film critic too. As much as her fiction is beloved for its ingenuity, her nonfiction essays (centred around the pressing socio-political issues of the day) are regarded as pioneering too. The Ministry of Utmost Happiness (announced in 2007) has been 10 years in the making and reflects Roy’s 20 years of work as an activist.

A Book Truer To Life, Closer To The Truth…

The Ministry of Utmost Happiness is brave and unapologetic of the criticism it offers through its stories, that are at times revealed in undertones and at times explicitly. Be warned, don’t read the novel if you can’t face the ugly aspects of our nation, India.

It is many things, but not so much about a “Ministry” than chaos; and not so much about happiness than all things horrible laid out in terrible excruciating detail. This particular theme of several and varied painted truths, real truths and the profound truths, and the underlying irony between them is too overpowering for anything else the book has to offer. Therefore, there is a phrase in the book that best describes itself, “… the more truthful emblem of the times…”; truthful emblem of our political climate; or truthful emblem of the mistakes/faults of our Army, politicians, bureaucrats, activists, journalists and us: citizens.

The Story At The Heart Of All Stories…

The story is of a eunach Anjum, Saddam Hussein (a Dalit), Dr Azad Bhartiya (an activist), Miss Jabeen the Second (an abondoned child), Imam Ziauddin (an abandoned parent), Maryam Ipe (a teacher), Revathy ( a Maoist) and Tilo (sometimes a wanderer, a kidnapper, a Kashmiri militant’s lover, a stenographer) and how they, after having lived, struggled, persecuted and overcome or given up on  the chaotic, oppressive, inhuman ‘Duniya’ had found a safe haven or a resting place in Jannat Guest House and Funeral Services.

Be warned, again, there is no optimism or happiness in The Ministry Of Utmost Happiness. Maybe assurance. Assurance in the theory that Kashmir will be a heaven again; assurance in the beating heart of a child (Miss Jabeen the Second), in its innocence, in hope for its promising future; assurance in the magic that Tilo and Musa will somehow complete their love story through the cracks in the barrier, between the living and the dead. Assurance that dies when the author makes us wonder how long a nation can stand having threatened and destroyed lands, homes, way of life and existence of so many groups. Assurance that dies when we are shown our own ignorance and lack of empathy. The details of the methods and patterns in which atrocities are committed in our country (Rise of Hindutva, Gujarat 2002 Riots, Capitalism,

Dispute of Kashmir, Emergency, Sexual Crimes, War Crimes), begs us to question our humanity. Especially in this moment of our history, when our minds have muddled pictures of the past and future, The Ministry of Utmost Happiness gives a clear picture of our present– at times through a simple poem like this-

In this regard: for its edifying quality, it is an important book.

Apart from helping us understand our political and social environment from the possible and seemingly impossible but probably possible viewpoints, the book leaves much unexplored.

While we can admire the characters for their depth and their strength, maybe except Anjum, the characters seem to be static. However, the myriad characters and the way each exhibit a part of a spectrum, makes up for not divulging into characters like how maybe Khaled Hosseini had with Laila, Maryam, Hasan and Amir: utterly emotionally; passionately binding them to the readers and devastating them in the process.

But it seems it was important for the novel to cover the spectrum rather than stick to a character. Otherwise, it wouldn’t have the influence it has on its readers. Nevertheless, the readers could forget the characters, but the message of these characters is well-delivered and imprinted in their mind.

The writing is, of course, that of a master. To be honest, even though it is shocking, we are not unfamiliar with these characters, their stories and how both of them progress, but it is the author’s web of mystery combined with truth, information, and perceptive nuances, along with beautiful and engrossing language that makes all the difference. For instance, for a long time, I will imagine how Rasoolan’s “…deep, gravelly, masculine voice…” followed “…languorously…the beads as they skittered around the bedroom floor.”

There is some Urdu poetry sprinkled throughout The Ministry Of Utmost Happiness (that seems nothing less than a reward) and an astute humour (that crops up so unexpectedly) that make the novel pleasurable.

The book as it says is dedicated “to the unconsoled”, but it is about the “unconsoled” and for the ignorant (both intentional and unintentional) and deluded. The Ministry Of Utmost Happiness shows us that we are as good as our reality, which fortunately or unfortunately, we create in our minds…