Thank you, Nag Ashwin! Your Musings On Savitri Has Taught Us How To Embrace Everything Life Gives Us, Royally!! 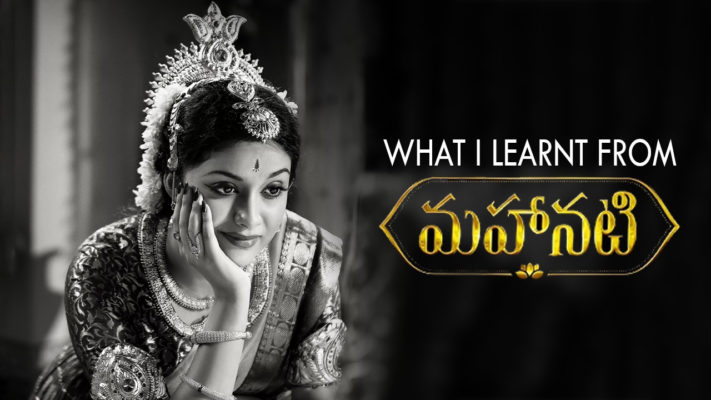 An Unshakeable Goodness – The Story of Savitri

I might be the last person talking about the mammoth success Mahanati has achieved. Without any doubt, I’m pretty sure this biopic on Savitri is still haunting many like me, who have watched the film. It has been a while since my heart felt warm, content and overwhelmed after watching a movie. Even after a week of watching it, while riding my bike alone to work or while having lunch quietly, there are glimpses of the film that still flash at the back of my scattered mind.

Most of the current generation know Savitri only through their elders, critics and of course movies as well. And all that we knew was – Savitri was a flawless actress, married Gemini Ganesan and in her last few years turned alcoholic losing much of her property.

We now feel guilty to sum up such an inspiring and celebrated life into one emotionless sentence. This movie opened the eyes for many of us and showed us what it took for a woman back in the 50s and 60s, to not just excel in a field she was pushed into, but how to own it sportively and make merry out of it. She left an undercurrent message on being independent, committed, to remain grounded and battle one’s choices made in life.

It didn’t look like the makers wanted to churn huge numbers with this movie. Like Nag Ashwin said, he wanted to ‘celebrate’ the legend. And rightly so, he has done a lot more than that. I’ve heard some people around me saying, ‘maybe Telugu cinema never witnessed a biopic in its industry, which is why they are going gaga about Mahanati’. I’d agree to the first point, it is the first biopic Telugu cinema might be witnessing at this scale. But, the reason it has made its place into everyone’s heart is not that it was the first biopic, it is because after walking out of the cinema halls, they took home not just the movie in their hearts, but some great lessons as well. Once teenage kicks in, many of us aspire to do many things. It is not concrete that we end up being what we aimed to be. But, our choices and the commitment to stick to them will matter in shaping the individuals we turn out to be. While Savitri already made a commendable entry into the industry, it was too early when she fell for a married man. This resulted in breaking up with her family, thus giving up on all the wealth and career, making a lucid decision to live separately with her husband. She felt content in leading a normal life, over a lustrous career. But, when cinema (Chakrapani) knocked on her door, calling her to fulfill the need of cinema, she graciously accepted it, took it up as a responsibility and slew it thereafter. As the life of Savitri shows us, there might be many choices we come across, but, what you choose will define you.

Being Fiercely Independent No Matter

There is no feeling more blissful than being an independent individual. Even in these times, we struggle to make a strong independent voice. A girl back in those times, was not just bold and a believer in her choices, but in the process showed us how one can celebrate life if you choose to be independent. At one point, it is said, Savitri never liked to approach anyone for help. That is not out of arrogance, but out of fear of causing trouble to someone else. We are talking about independence, freedom, and rights, right now, but Savitri was a queen with swag when patriarchy was the norm of the day back then.

The Celebration Of Life – The Savitri Way

Savitri was an artist who went from rags to riches. But, one thing she never shied away from doing was to celebrate every moment in her life. Be it her stage plays, the roles she was offered, her personal relationship, her fame or wealth, Savitri felt complete only when she celebrated it. Now I’m not sure how and to whom this should be credited. Should we credit Savitri – for being ‘one of a kind’ or Nag Ashwin – for tying various knots from her life and showing it to us in such an aesthetic manner?

It’s Your Choice, It’s Your Battle – Own It Up

As humans, it is a default tendency to defend ourselves and look for reasons to blame others, when things go wrong. But, Savitri was a woman of panache. It was quite evident that she anticipated the circumstances she might have to face, especially in her personal life. And when the situation aroused, she never gave up. Though she leaned towards lesser mortal choices, she fought herself through it and owned the consequences of her choices. Embrace Everything Life Gives You

Savitri’s life might look like another saga from the glam world. But, the best lesson that was taught to us through her life was, ‘embrace everything life gives you.’ And she did it with élan. Susheela meets Madhuravani and tells her that Savitri not only celebrated her peaks but also embraced her lows. Now, we don’t know whether this really took place or not, but the lesson Nag Ashwin drew from the legend’s life is genius stuff, and it is definitely something we all need to take home with us.

See, this is the best thing about movies. They do affect lives and give you some direction. Like it’s said in the movie, story and love don’t come to us when we want. They will come to us when they want us. Similarly, you need not dig for inspiration in every corner, when you are due for inspiration, you will automatically be inspired. Be it through a book, movie, song, poem, a quote or anything. Just be alert enough to grab it and make the best out of it. With his first movie, ‘Yevade Subramanyam’, Nag Ashwin showed us what one needs to make a life worth living. And with ‘Mahanati’, he has shown us how to embrace everything life gives us and make it a life worth living.