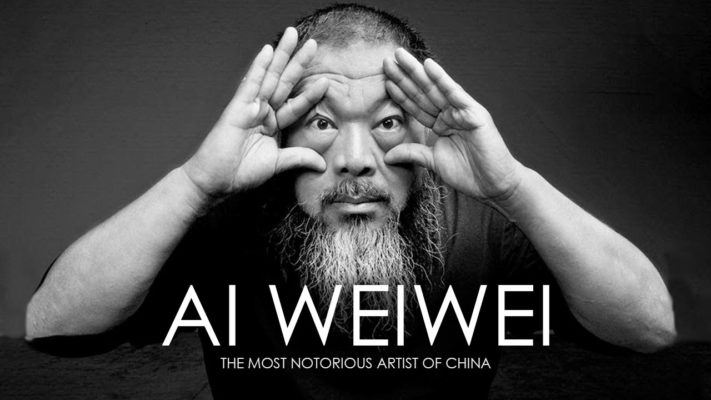 Ai Weiwei- A Daring Artist With No Regard For Acceptable Norms

A man of 61, ruffled looks, but never minding to sort his dishevelled hair or trim the fringes of his beard at the very least, Ai Weiwei has absolute disregard for the standard and acceptable societal norms. Now known as one of the most controversial artists in the world, Ai Weiwei, an artist living in Beijing, is popular for constantly toying with the lines of the innocuous and the obnoxious in his art. The daring art of Weiwei is unmatched and is nothing like the world has known ever.

The recurring controversial works of Weiwei have led to the artist’s multiple arrests and subsequent harassment in the hands of the Chinese government. A bold and inexorable detractor of the authoritarian establishment, Ai Weiwei, has spent a fair amount of time behind the bars. He was not been permitted by the Chinese government to go to Beijing for one year and has been barred from travelling outside China.

The question is what is this paranoia about Weiwei? What makes him so controversial and dangerous in the eyes of the Chinese government? The answer lies in his art. During his seminal years, Ai Weiwei lived in New York. When we say New York, we are talking of the New York of the 1980s, a time that posed Warhol as the god, and performance and conceptual art as the dominant spirit of the time.

Then, it can only be justified that Warhol’s influence and the liberalism of the art of the time govern the works of Weiwei, leading him to merge his art and his life into a bold, brave and politically stimulated performance. A performance that guides us in defining our way of looking at China. Weiwei can use any genre or medium of art –photography, readymades, sculptures, architecture, performance and even blogs and tweets –if that serves his purpose of delivering his overpowering and bitter message.

A Symbol Beyond Just Fame, A Symbol Of Struggle

“I left telling my mother that I would return only when I was more famous than Picasso,” recalls the artist. About China, Weiwei declares, “It is impossible to simplify my feelings about China because this country is too many things and too complex. Some things never change; others change much too fast. I left China in 1983 because I didn’t believe my country would ever adopt a supportive policy toward artistic expression.”

Similar to Warhol, Weiwei’s role is indivisible from his artistic works. His art channels its command from the conflicting roles of the artists in the modern day culture.

Among these artistic roles, the most condescending are the ones of the preacher, the martyr and the conscience. Despite being harassed and arrested almost every other day, Ai Weiwei has not refrained from continuing to hold the Chinese establishment into account.

On one hand, he calls out the names of more than five thousand children who faced horrible death from the 2008 Sichuan earthquake, owing to the substandard constructions of schools. Simultaneously, on the other hand, he encompasses a postlapsarian provocative role almost inspired from Dada. One of the most renowned photographs of Weiwei shows him giving the finger to the White House. To say the least, Weiwei is a showman in the mind of an artist. He nurtures the press, incites and comment and constructs spectacles. Sunflower Seeds, Weiwei’s signature work, was an artwork of hallucinatory power and presented a hundred million porcelain pieces each of which has been painted by one among sixteen hundred craftsmen in China to bear a resemblance to a seed of the sunflower.

Ai Weiwei exclaimed, “The secret police told me everybody can see it but you, that you’re so influential. But I think (their behaviour) makes me more influential. They create me rather than solve the problems I raise.” The administrative authority of China tends to create problems in his way of art making in whichever way possible. In 2010, when Weiwei set up a studio in a projected arts district located in Shanghai, the Chinese regime, concerned that the studio would become the source of dissent, claimed that the studio debased building code and destroyed it in the earliest in 2011.

Commenting on this Weiwei said, “It made every young person who may or may not have liked me before think I must be some kind of hero.” Ai Weiwei’s life seems to be marginalized in “before” and “after”. Before the initiation of the modern times, Ai points out, the cultural condition of China encompassed a “total condition, with philosophy, aesthetics, moral understanding and craftsmanship.” The essential effect of art in ancient China was powerful.

In Weiwei’s opinion, “It’s not just a decoration or one idea, but rather a total high model which art can carry out.” Referring to Van Gogh and the transcendent visual unity in his art, Weiwei says, “The art was a belief that expressed his views of the universe, how it should be.” Indicating at the “after” clause in his life, the artist stated, “After the Cultural Revolution, muscles were still not built up to laugh or show emotion. When you saw a little bit of colour –like a yellow umbrella in the rain –it was quite shocking. The society was all grey, and a little bit blue.”

The Expression Of Resistance Behind The Spirit Of Art

In a shocking fact of binary duality, Weiwei, the same person who immerses himself in the transcendental unity of Van Gogh, also esteems the perplexing and to some extent the analytical susceptibility of Jasper Johns. Most of the renowned artworks of Weiwei find their roots in the Dadaist and conceptual art. In many instances, in a Duchampian fashion, he has created “readymades” proliferate with elements of strong satire. To present such an instance, it is absolutely necessary that one talks of his “readymade” in which he positioned a Chinese statuette within a Johnnie Walker Scotch bottle.

Post Cultural Revolution, Ai Weiwei reacted to the new regime of China with nasty satire attacking the puritanical and traditionalist character through the demonstration of a boisterous and rude individuality. He published the photograph that showed him naked, jumping preposterously in the air and holding some object above his genitals.

The photograph is captioned, “Grass mud horse covering the middle”, which in the vernacular Chinese, sounds like a harsh joke about mothers and about the Central Committee.

Weiwei’s Resistance To All Versions Of Regimes

Weiwei established a corporation and called it “Beijing Fake Cultural Development Ltd.”, in a way mocking the Olympic Games that have become almost a state religion in China. China’s CCTV tower, designed by the renowned Dutch architect, Rem Koolhaas, is regarded as one of China’s esteemed national assets.

However, about the CCTV tower, Weiwei remarks, “I think if the CCTV building really burns down it would be the modern landmark of Beijing. It can represent a huge empire of ambition burning down.” Weiwei’s resistance to all versions of regimes –communist and capitalist –makes itself obvious in one distressing way. The artist says no to listening to music. To this end he expresses, “When I was growing up, we were forced to listen to only Communist music. I think that left a bad impression. I have many musician friends, but I never listen to music.”

At every step, he holds the educational system of China accountable for being a failure in generating any broad or independent sense of probability, both for the individuals as well as for the society as a holistic concept.

He states, “Education should teach you to think, but they just want to control everyone’s mind.” In his opinion, it is “free opinion” that the Chinese regime is most scared of. Throwing light on the autocratic psychology governing the Chinese regime, Weiwei comments, “I’ve been interrogated by over eight people, and they all told me, ‘This is our job.’… They do not believe anything. But they tell me, ‘You can never win this war.”

Reflecting The Avarice Of The Society

The art of Ai Weiwei is inherently different in both essence and character. They are created for a purpose that goes beyond commentary and morals. His art is open-ended, esoteric, and utopian in character to some extent. One of his most celebrated sculptures, Template, showcased a pandemonium like ‘Babel’ of windows and doors from the ruins of the Qing and Ming dynasty houses. The windows and doors from the history apparently took the spectators nowhere until, in an odd manner, a storm knocked the sculpture down. His most renowned work, Sunflower Seeds, yields many unanswered questions. Although the painting of an incredibly huge number of seeds individually is slightly overwhelming, the magnitude of the work, both simultaneously miniature and cosmic, seems no less eccentric than the consumer society of China and its relentless desires.

Hence, the questions arise –Does the huge count of the seeds indicate the mind-baffling sum of millions and billions of money generated by the nations and their corporations? Do the sunflower seeds, in any way, mark the famines mapped in the history of China? Do the seeds stir up the brief moment that China enjoyed, of cultural independence in 1956, commonly referred to as the “Hundred Flowers Campaign?” Do the seeds represent the nation and citizens, mass and individual, showering both with the hope possibilities? Will China flourish and bloom ever with the blissful passion of the sunflowers of Van Gogh?

More famous than Picasso or not, artist Ai Weiwei has definitely created his mark in the world of art, proving his friend Allen Ginsberg wrong, who once told him, “Art would never recognize a Chinese artist.” Pondering over the changes he has seen and the present situation of relative liberty of the Chinese artists, Ai Weiwei says in jest, “It’s like the movie Home Alone, the parents are gone. But they were there before, and maybe they will come back.”

Related posts:
[VoxSpace Life] Over 800 Ladies To Participate In The 10th Women’s Car Rally In Mumbai
[VoxSpace Life] 10 Different Reasons Why Diwali Is Celebrated Across Regions
[VoxSpace Life] Violence Monitoring : Important But Not So Feasible Reactionary Law By Australia