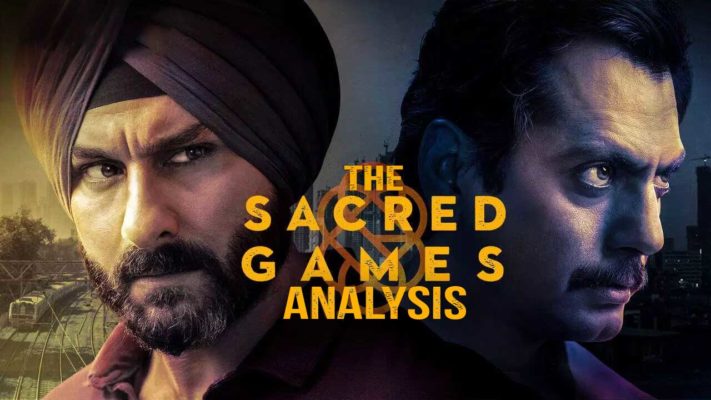 The Making Of Sacred Games

When Netflix, back in 2016, announced its foray into the Indian market, most of the film analysts discussed and debated its intention. Some said that Netflix would bring European shows to Indian market on syndication and would only, after assessing the acceptability Indian viewers give, opt for originals.

However, there was an optimistic group which foresaw that Netflix would come up with its own region-specific content and establish its market. Which one do you think Netflix opted for? Well, it did both. It syndicated or rather streamed shows like Narcos, to test the waters, to start the proceedings. The risk truly paid off.

The first season of Narcos was seen by a whopping 42% of its subscribers in India. One could assume that its not exactly a high number. But when you factor in the fact that Narcos was a show made in Spanish, and featured literally no known faces, to garner such a wide acclaim in a streaming app based in English, was basically a mission accomplished by Netflix.

Narcos not only showed that there was a valid market for region specific and language irrespective content but also indicated at something of a curious observation. It showed that people were ready for crime dramas, which unravelled content which was raw, organic and importantly uninhibited. It was then imperative that Netflix needed to replicate its success of Narcos with a story that perhaps paralleled it, in terms of crime, political afflictions, biographical landscape, and a whole lot of ambitious ideas.

It is in early 2017 that Netflix found its muse- Vikram Chandra’s Sacred Games. It basically had everything that the streaming giant required to truly establish its fanbase in a diverse country such as India. A classic underdog story of a small-time thug going on to become Mumbai’s biggest gangster.

From corrupt bureaucrats to committed policemen, from socio-political commentaries to neo-religion affiliations, the story had everything. And in the midst of all these, a ticking bomb, albeit a race against time scenario, which could serve as an overall story instrument. Netflix had found its Narcos in Sacred Games.

In the time to come, Sacred Games would change the face of streaming content forever, at a level that perhaps Narcos never could reach. In all manners, Sacred Games became the ‘Content Of The Year’ across any platform, earning a pop-culture status, widespread adulation from the critics, and of course meeting all the commercial success as expected. Perhaps to a degree, which was more than what any other show achieved on Netflix in the last few years.

Dichotomy Of Fates – Sacred Games And Its Vision Of Future

To look back and say that Sacred Games was a well-crafted series, and it, therefore, met with success, would be a gross understatement. Yes, Sacred Games, helmed by two of India’s finest storytellers, Anurag Kashyap and Vikramaditya Motwane, was shot with a sense of spectacular panache found often in shows like MadMen, Peaky Blinders or Fargo.

But, it wasn’t just this expertise that helped the series. In telling the story of two different men, Ganesh Gaitonde (played by Nawazuddin Siddique) and Sartaj Singh (Saif Ali Khan), Anurag Kashyap & Vikramaditya Motwane applied an approach which was unique and effective.

What this division of storytelling achieved is that it gave Anurag Kashyap enough leeway to explore the character of Ganesh Gaitonde at his own pace and with as much detail as possible. He cast Nawazuddin Siddique, who had worked with him earlier in the hugely acclaimed Gangs of Wasseypur duology and psychological crime drama Raman Raghav 2.0. To bring Nawazuddin to play the part of Ganesh Gaitonde, in a Netflix web series, when in fact he was at the prime of his acting career, was practically game half won.

Anurag Kashyap then took this interpretation to weave a gangster flick around it, paying a fitting homage to the legendary Francis Ford Coppola and his Godfather trilogy in the process. Anurag Kashyap’s task was simple and yet immensely important. To ensure that he was telling a gangster flick, from start to end, as if it were a standalone movie.

That was perhaps the ask and the reason behind the division of creative labour. Ganesh Gaitonde was a man whose story was distinct to the contemporary times and ideologies. And yet, he was a man who was a zealot for a future which was never to be. To show the differential between the future envisioned by Ganesh Gaitonde from the past and the present as lived by Sartaj Singh required a different set of eyes. This is where Anurag Kashyap found Vikramaditya Motwani as the perfect man to helm the present. Perhaps this deep understanding of a story arch is what makes Anurag Kashyap and Vikramaditya Motwani the best in the movie business.

In casting Saif Ali Khan as a morally upright police officer, Netflix played a gamble which would eventually pay off. The Nawabi actor brought to Sartaj Singh a sense of out-of-place vulnerability, which made the viewers immediately relate to his frustration and irritable perseverance.

A sense of unfamiliarity and a lack of belongingness was what Saif Ali Khan brought to the role, which blended perfectly well in his story arch, as we see Sartaj Singh fighting tooth and nail in finding his place in the corrupt and morally ambiguous socio-political landscape. And in doing so, he becomes the perfect foil for Nawazuddin’s Ganesh Gaitonde, who is as sure-footed as he is ruthless.

The dichotomy of this story was ensured by two sets of minds and that was the first win for Netflix. Sacred Games was bound to be critically acclaimed for pulling off something so deeply intricate and yet so achingly simple.

However, all was not won. Netflix had a property in its hands which would be appreciated for its ambition and storytelling. But then Netflix, in order to establish a market for itself, here in India, needed something more than pure storytelling. It needed a mass appeal. Something which was unheard of.

The Contribution Of Varun Grover And Radhika Apte

When we ponder over a thought of impressing the masses, the names in the subheading don’t really make sense. However, they were given the roles of impressing the audience with deeply etching traits. Varun Grover was roped in by Anurag Kashyap specifically to adapt the novel, Sacred Games, in the most rustic and raw manner.

Varun, the JNU alum, known for his earthy sense of humour, courtesy his theatre and standup comedy stints, and his sharply smacking and yet profound dialogue-writing skills, as evidenced by Gangs Of Wasseypur and Masaan, was the perfect person to flesh out the characters of Ganesh Gaitonde and Sartaj Singh.

Varun adopted two different styles of dialogue writing to go well with the two lead characters. Eccentric, cuss word heavy, initiatory dialogues- when it came to Ganesh Gaitonde. Remorseful ponderings, simplistic and yet warm dialogues to Sartaj Singh. The contrast was thus established, all the while leading to slogan worthy dialogues which could be resonated by any simpleton. And thus a rapport was established with the general masses, where they could understand and enjoy the flourish of rustic tongues and quick wit, irrespective of the intricate commentary embedded deep in the lines.

If Varun Grover brought a sense of common parlance to the series, Radhika Apte brought forward a reflection of uncomfortable rivalry. Radhika Apte’s Anjali Mathur, a persistent RAW agent, finds herself caught in between the dichotomy of fates intertwining the two leads. Empowered individualism, coupled with a blind commitment to duty, and with ample amounts of platitude, bring Anjali Mathur to valiantly face off with a complex crime machinery with a simple pistol in her purse.

What could have turned the role to depict stereotypical feminist tokenism with one false move is saved by Radhika’s graceful and intricate gender-neutral understanding of Anjali Mathur’s role. The makers ensure that Radhika’s Anjali answers the role brandings showered on her initially in the series by not just projecting her strengths, but in equal measures laying bare her flaws, perhaps commenting upon feminism itself as a movement of all inclusion and comprehensive development.

In watching Ganesh Gaitonde, Sartaj Singh and Anjali Mathur grapple with the race against time scenario is in itself a thrilling adventure. It stands to reasons that this crime solving and saving the city at the end of the day, à la Angels and Demons, could’ve been the most thrilling way of telling the story.

However, Anurag Kashyap and Vikramaditya Motwani opt for something slow-paced but with a strong emotional payload. This is delivered by an array of interesting supporting characters. Kubra Sait’s Kukoo is one of them.

Playing a transgender cabaret dancer, Kubra Sait’s Kukoo becomes the prime motivating factor behind Gaitonde’s rise among ranks. In pairing, Kukoo, with Gaitonde, Sacred Games broke the conventions in all manners possible. Now, the masses understood something refreshingly original and yet highly relatable.

Kukoo represented a young man’s crush, and the catalyst of a promise unfulfilled. The heartbreak of Gaitonde when he loses Kukoo made him all the more human, and therefore all the more dangerous. That is the genius of the story of Sacred Games, and the portrayal of Kubra Sait’s strong-willed and yet often playful Kukoo is a reason not to be discounted in the process.

And thus Netflix had everything that could make Sacred Games gain worldwide interest. Carefully sculpted characters, an urgent storyline, a dramatic turnaround of events, empathetic situations and smoothly understandable language.

Now all that was left for Netflix in making Sacred Games not just a one-off success story, but a phenomenon was to have an overarching story beyond the present situation. To create an interest which could be long-lasting enough, was very close to making it everlasting.

This is where Varun Grover’s adaptation techniques came into play yet again. The trio of Anurag-Vikram-Varun ensured that the series was never left with a dull moment. However, their main task was to keep the sense of looming danger intact. Just when the viewer thought that the story was unravelling all its secrets, the viewers were shown another story which tightly wound upon them.

Thus, by the end of season one of Sacred Games, Netflix had ensured that only a part of Gaintonde and Sartaj’s story had been revealed. Although their individual tracks felt like they coming to a closure, it was all a ruse, as the makers cleverly hid an unexplored continent in the proverbial map. And thus, Netflix ensured that Sacred Games was a property which could stand the test of time.

The success of Sacred Games can be clearly measured by the infectious confidence that streaming apps derived from it. Now, they knew that if a story could be found and told in ways which are both entertaining and appealing, they could actually build a timeless property of it. The beauty of uncensored content, the joy of dramatic pacing, the pride of structuring a three-act arch in a single episode, were the essential tools of making a great web series. And Sacred Games had done it masterfully well. And this is perhaps why Sacred Games remains a web phenomenon like no other.