[VoxSpace Review] Soni : A Realistic Look At Our Police System Through New Eyes 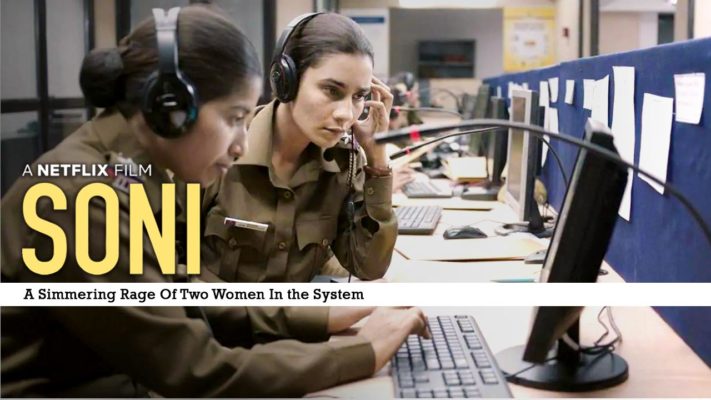 Soni- A Much-Needed Mirror For Our Society

Soni, like its leads, is a film simmering with rage, rage against the system, their work and most of all the corner they are relegated to. The rage is internal, it is slowly building up, not to the explosion, but to a sad realization of where we stand today.

Rather than being a preachy tale about how great we could be, Soni is here to tell us that we need to look internally to understand the place we are in, to ever aspire for a change.

Soni is the story of two cops hailing from different classes in society. Soni, a young police officer and her Superintendent Kalpana are both working on an operation to figure out the cause behind the growing crisis of violence towards women. It deals with the various people that these women have to deal with during the investigation, which becomes harder and harder due to Soni’s hot-headed nature.

The best place to start with this movie is the performances. Both the leads Geetika Vidya Ohalyan (Soni) and Saloni Batra (Kalpana), look and feel like they are fully immersed in the milieu that the director wants to put the audience in. Geetika brings a kind of immediacy to her role where it feels like she can pounce at you in any moment while trying to hold back her instincts. Saloni Batra brings in the restraint and composure that becomes a part of anyone with enough experience in a system like the Delhi Police Force. The rest of the cast consists of mostly real people which make the whole piece feel completely authentic.

Coming to the writing of the film, the film mainly consists of very incidental dialogues between the characters. There aren’t any monologues about the plight of any characters or platitudes about the state of our country. It feels like normal people interacting with each other, how they would do every other day. The story is told through how they react to each other and with the use of incidental anecdotes, that is way more effective than preachy monologues.

The director mainly tries to immerse you in the moment by keeping the shot lengths equal to the scene length. The camera never cuts until the moment is over. This allows the audience to stay in a particular space and time without the intrusion of cuts. He also achieves this through his soundscape, there is no music to elevate the emotions of the scene. The whole movie consists only of diegetic sound. The amount of care put into getting the sound right is astounding. It captures the chaotic nature of Delhi in a very recognizable manner.

Finally, I end this article by urging everyone to watch this film because of the unique perspective that it provides. It shows the world through the eyes of two people in power, who are not allowed to use their power in any meaningful way due to the anarchic bureaucratic nature of our police system.