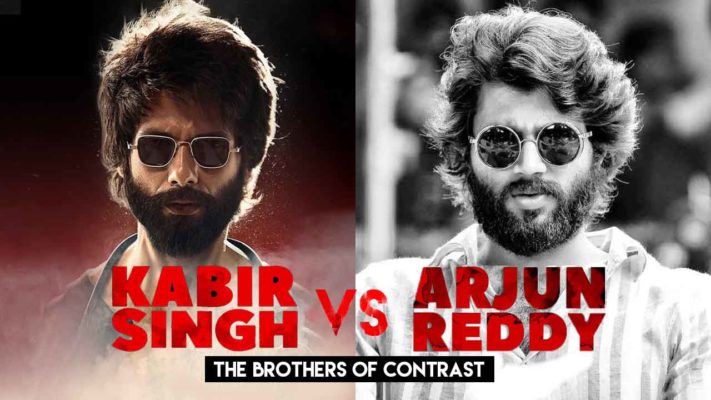 As Landmark film! A coming of rage drama! The crack of a new dawn in Telugu Cinema! People raved this way about Arjun Reddy with its release two years ago.  The misogynistic part of the film met with considerable criticism too but what held the prime was the gritty conviction of the storytelling and this conviction was to veraciously record a flawed man’s fall and rise stating his toxic masculinity and id-driven impulsiveness to be major downsides.

B- grade, No film for a woman, Uninspired – this is the reception acquired by the official remake of Arjun Reddy, Kabir Singh. Strangely, all of these ring with truth. Arjun Reddy did win while Kabir Singh failed and there are essential reasons why. As one film sparkles as a game changer, the other is a brute, a blemish.

The seeds of both these films are the same – a chronicle of a problematic man’s broken relationship, the ruins of his rage, his suffering and redemption. Yet, it is shocking to note how different the two films grow out to be. Arjun Reddy is a toxic masculine take on a broken relationship with a problematic man as its lead. The film recognizes that its man comes with his very own issues. On the other hand, Kabir Singh builds fancies around the flaws of its man and takes unapologetic pride in his problems, rushing to glorify and decorate the chauvinism.

What lingers as an issue in the previous film becomes an identity of the retelling. Here are five among the many reasons why Kabir Singh failed while Arjun Reddy won.

Rebel Without A Cause

Rage is the primary risky emotion associated with both Arjun and Kabir. Arjun’s anger is depicted to be built on vulnerabilities and weaknesses and the same is shown to be evidently condemnable and ruinous. He is a man fighting his own demons, his anger is the nemesis and it wasn’t an everyday affair to witness such a man on screen in Tollywood, he was a rebel not without a cause. While Arjun Reddy presents anger to be a personality problem, Kabir shoulders the same as a personality trait and he has no regrets. His very very angry self is neither exhibited as his defense nor defect. There is hence a major attitudinal change in both the characters.

When Kabir states he is a rebel with a cause, we just couldn’t buy it. Arjun did rebel against himself and did trigger the audience to witness his flawed self’s journey. Kabir’s rebellion, however, has a poor cause, it appears as if he is rebelling against equality and sensitivity as he refuses to take in his flaws. There is no certainty if he has even meant it. His rebellion seeks only to fear others and build a fallacy of formidability around.

When Preethi comes all the way to meet Kabir after 15 days, he doesn’t kiss her, overwhelmed in love. He just refuses to add that they are in an orthodox premise. Yes, the rebel is wary of his self-image and he places his lady love in the second regard. Preethi isn’t offended that he isn’t reciprocating her love. She just wants him to kiss her to disprove the conventions. Here the lovers do not appear undeterred, they just emerge unconvincing with their heads and hearts considerably misplaced. I recall no such ridiculous exchanges between Arjun and Preethi. The foundation of the relationship alike the rebellion is sickly and threatening.

While talking of Arjun and Kabir, their respective father’s state that he is closer towards becoming a zero in life. While the professor introduces him, he states that he is a topper with an impeccable academic record but a zero in anger management. Yes, despite his achievements this man is a zero. Arjun Reddy accepts its man as a zero, a colossal failure as he suffers in the circle of ruins he brings on himself. He is led by his flaws towards failure and we see it. He is let to suffer for he needs to pay the price and as he does, we develop rooting for the zero to emerge beyond the ruins and redeem. At times, we do need a second chance.

Kabir Singh takes the second life in a reckless sense as he ardently attempts to make a hero out of the zero with his vicious rage added to be a spark in his badass bully self. He enrages the viewers as he mistakes insensitivity for intensity hence as Arjun Reddy emerges as a film about a problematic man, Kabir Singh becomes a pathetic and problematic film in itself.

The Breach Of Delicate Lines

There are certain subtle and carefully laid character touches which serve as an enhancement in Arjun Reddy. An instance is when he talks of his liking for the seas. He has selected the college to be in its vicinity. In a way, he is like the vast deep sea. The sea rages on, it also gets calm and soothing, it is unfathomable and it holds life within. The sea rages over the shore, embracing it. It always returns to its golden sands as the shore endures with patience and in love as Preethi. There is surrender as much as the initial submission. It is within these delicate lines of sensitivity that Arjun Reddy treads and creates a picture of its core relationship.

Kabir Singh strolls off and breaches these sensitive lines. His rage over Preethi becomes exploitation and her surrender, a meek submission. The following instance might enable one to see that Kabir Singh and Arjun Reddy happen to be two different men despite very few common traits.

When Arjun fights Amit for Preethi, he gets angsty and breaks down in tears, moving the frustrated Amit to a surprisingly friendly promise. This scene is crucial in telling us what she means to him as it also registers her view recording her first significant reaction in the film. Tears overwhelm as she sees what she means to Arjun and he embraces her, shedding tears. Preethi essentially is a part of Arjun. He bleeds for her bruises.

Take Kabir Singh in the same instance. The man proceeds with more anger than pain. He sounds violated and not affected. Amit too relents since he is content to see Kabir busted. There is no empathy but the heat of futile egos. Kabir sheds not a drop of a tear. A tear of horror stirred in my eyes to witness Preethi break down that moment being brutally drawn to the violent clash of rash male egos. The heart feels sorry for her and struggles to awaken her senses.

Arjun sees Preethi as a part of him while Kabir sees and treats her as his property. His clash with Amit comes off as fierce row a man has with the one who has dented his new car. That’s how painfully pathetic it went. It is distressing to state this but the truth is that Arjun will be enraged to see the way Kabir treats Preethi.

Sandeep Reddy Vanga retains the polarising aspects of Arjun Reddy and strangely magnifies it without any remedying. The addition of ungracious elements distorts the film further. When Preethi calms Arjun asking him if she could even survive without him, Arjun releases himself from her hold and hits her. He is threatened that she might abandon him and acts immature and rash. His insecurities speak for itself, marking the beginning of his fall.

When Preethi tells Kabir the same, he takes a moment to tell her that she is a nobody except for him! She concedes! A deafening blow follows this already disturbing verbal one with the superiority complex of the character highlighted in a troublesome light enraging the audience against him. There you know Arjun would have never uttered those words of disregard. Kabir continues to reinforce his superiority over her, instructs her to wear her dupattas properly,  bossing around as Preethi happily plays the slave. This gives a completely different dimension to his naming of the adorable labrador as Preethi.

The essence of their relationship vanishes in the warped clouds of ownership and control. This, hence alters the nature of their physical bond. It fails to come across as warm, intimate and as an extension of their love. It is the heart that bleeds when love breaks one, here the bruises and damage are miserably placed down under.

The Ruins And Redemption

As Kabir Singh presents its protagonist to be an arrogant prick and takes pride in it, it fails to earn our rooting for him. His ruins lack regret as he doesn’t seem to realize that he is the one who brings it all to chaos. His miseries seem fitting and refrain from provoking sympathy of any sort while his redemption is absurd and abrupt. It is not the goodbyes that hurt but the flashbacks. In the backdrop of an ill flashback of miserably written and presented leads, the rash goodbyes felt right and the reunion ridiculous and unfair.

Kabir Singh raises vital questions on the acceptance acquired by Arjun Reddy. These are questions to be contemplated but as we take a keener look, there is also no denial of the nuances and veracity Arjun Reddy came with. Kabir Singh treads where Arjun Reddy feared to go. They become two different men albeit being siblings and this explains the contrasting reactions acquired by them.