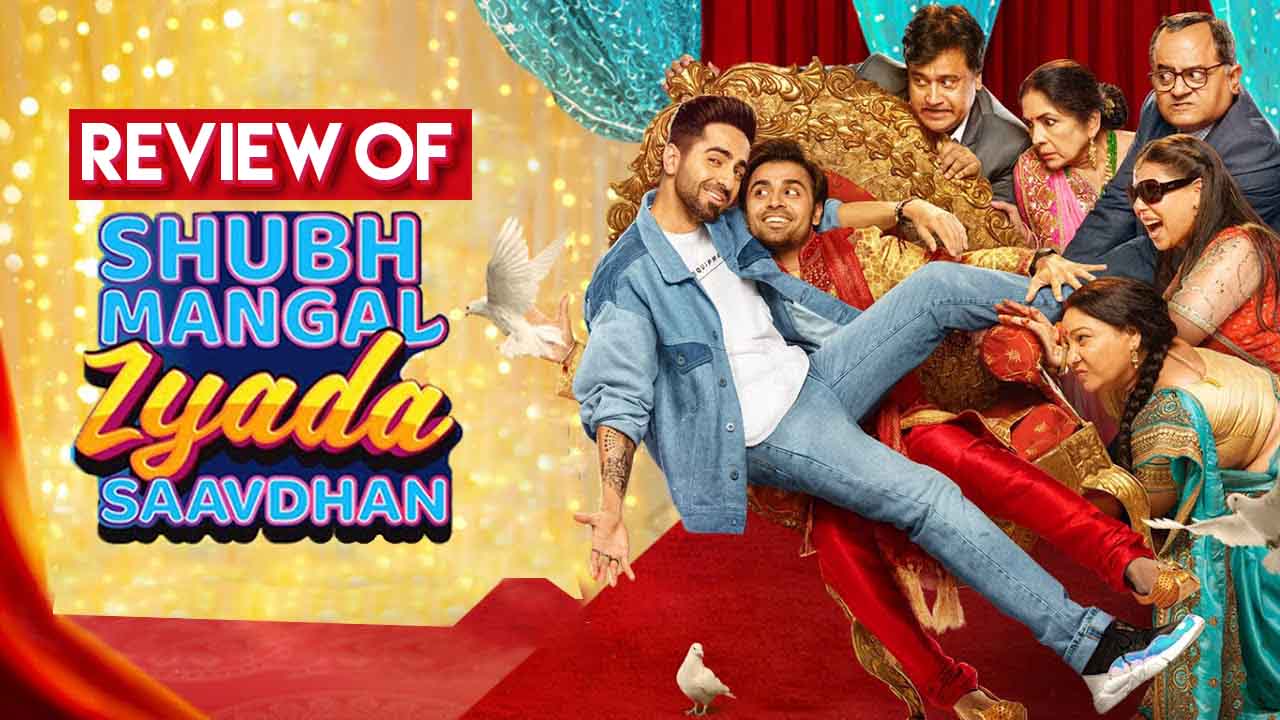 A Well Thought Out Love Story…

“My sexuality is my sexuality…..” yelled Ayushmann’s Karthik on screen and the whole theatre went “….none of your sexuality” and roared out with laughter and I realized what a beautiful world I live in. Shubh Mangal Zyada Saavdhan, directed by Hitesh Kewalya goes where very few have gone before, does what very few have done before. It teaches us to accept, not just homosexuality as depicted in the trailers, but the changing world and its many new colors. Essentially the movie is a romantic comedy and it is with immense pride that I say that it is a romance not bound by the sexual orientation of its leads. It could very well have Ayushmann and Bhumi Pednekar or any male and female actors as leads with caste/creed/religion/education/cultural friction point and it still would have worked just as beautifully as it did. It’s not a gay love story, It’s a love story. Period.

There are several reasons for this film to be as entertaining as it is but the biggest reason amongst them would be the writing. It is emotional but never preachy, it is funny with a lot of pop culture references but never cringy, it is romantic but never OTT. If I were to use one word to describe the writing, I would say it’s woke. But the real beauty of the words is understood when they are delivered the right way and not one….not one actor misses the mark. From an internet-facts spewing little brother to a Chachu (Manu Rishi Chadha) who is never allowed to live down his failures to a Champa Chachi (Sunita Rajwar) who is just looking for a fight, to my personal favourite of the bunch, Maanvi Gagroo’s Goggle Tripathi who is just savage and my hero from today, everyone just shines.

An Assortment Of Acting Talents…

It is not a stretch when I say that never once did I miss the leads or wished for some other character to take the charge because whoever the camera was focusing at, at any given minute was just lighting up the screen. I noticed that every situation that starts out between two characters in that family very quickly escalates into a hilarious full family fight, a trope that was repeated several times through the movie each time just as funny. There is also Kusum (played by Pankhuri Awasthy) who is the “extremely shy” girl selected by Aman’s family and who just can’t wait to get married to him.

Maanvi Gagroo deserves a mention again because she was just super amazing. She plays a no-nonsense, sassy girl who gets what she wants. Her happy ending is sure to warm your heart. Neena Gupta yet again brings in an award-worthy performance as the fast-talking, supportive, yet half-hearted wife of an opinionated, orthodox patriarch of the family, played by the terrific Gajraj Rao. As an agricultural scientist who is not ready to see the truth of the changing world yet believing that he understands it better, Gajraj Rao proves yet again that he is a powerhouse of a performer.

The Story Of The Two Leads…

Coming to the leads, Ayushmann Khurrana plays Karthik who is self-assured in his sexuality and flamboyant in his expression of love. However, he also brings in a layer of wistfulness and disappointment at the world around him which requires him to fight every single day for love that he knows he deserves. Playing the other half of the romantic pair is the ever-reliable (and internet sensation) Jitendra Kumar aka Jeetu. Jeetu’s Aman Tripathi is an introverted, calm and docile man who probably had planned to come out to his family on his own terms but an impromptu moment of passion forces him to confront his whole family at once with very little room to negotiate. Although he plays the character with restraint and dry sense of humor, the way he always has a wide grin and a twinkle in his eyes whenever his partner is up to any mischief is really cute and charming. Having been an admirer of Jeetu’s early works, I always knew that he had what it takes to be on the big screen but his sheer charisma and screen presence still took me by surprise. I have a good feeling about him and I will be looking forward to his future projects.

Although the acting burden was to be shared by both Ayushmann and Jeetu, there were a few moments where I felt that Ayushmann was playing the catalyst and Jeetu was the primary protagonist and this was his story. That being said, the chemistry of these two actors was crackling and the romance was palpable.