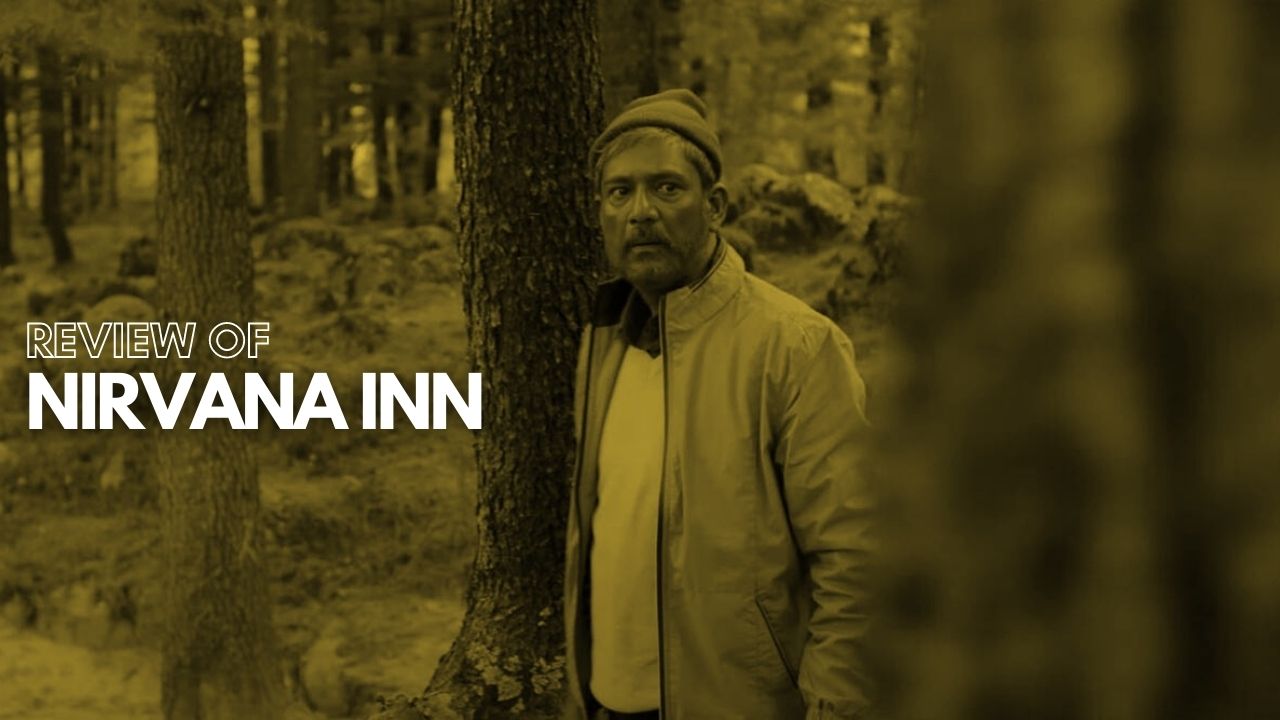 The Madness Of Mountains…

In an ominous opening shot, we see Jogi (played by Adil Hussain) swiftly walking across a landscape only to appear before the camera moments later, with worry and trouble marked on his forehead. Therein starts the story of Nirvana Inn, where a rather melancholic individual, Jogi, joins the titular resort as the manager, only to discover that the memories he’s run away from, having manifested into people all around him, specifically those checking into this scenic Hotel resort. The tone is set thereby for a surreal experience through the past and present; guilt and shame and remorse and retribution. Jogi is a reserved folk dancer with a dark past, so we learn during the film’s lean 115-minute runtime, who is straddled with demons of his past who slowly turn this peaceful-looking haven into a sort of purgatory with no escape. All hell breaks loose when Jogi realizes that there exists within this resort, some sort of a demonic incarnation who threatens to kill him. The story then gallops towards a horrifying third act, where all loose ends are together resulting in a terrible sacrifice. Without giving away much, Jogi confronts his own past in order to survive the horrifying consequences.

Whilst watching Nirvana Inn, one can’t help but reminiscence 2017’s Get Out directed by Jordan Peele. To draw parallels here, one can see how the film’s director, Vijay Jayapal uses clever horror tropes within the confined locales of a Himalayan town; introducing us to eerie characters at appropriate times to infuse a level of undiscerning assurance over the narrative. Much like, Peele, Vijay Jayapal uses the psychological elements of self-doubt and moral conflicts which gradually seep to the forefront, leaving both its protagonist and the viewer trying to grapple with the reality of things. Nirvana Inn one observes is not a fantastical tale like Tumbbad or hyperbolic loud fare like Laxmii; what it is rather is a slow-burner of a horror that relies heavily on the environment around it to percolate dread and confusion. And of course, much of its deliverance is burdened upon its prolific lead, Adil Hussain.

Much has been said over the years about Adil Hussain’s inherent competence as an actor. One look at films like Bhaskar Hazarika’s Kothanodi (2015) or Shubhashish Bhutiani’s Mukti Bhawan (2016), and you know why Adil Hussain is one of the finest actors working today. Gifted with sculpted features, a natural flair for language, and an overall enigmatic screen presence, Adil Hussain channels his melancholy man in this movie with a tenderness of a dewy leaf. His Jogi is not an assured man in any sense ( a drastic contrast to his role in Netflix’s Delhi Crime last year). He is rather a timid disoriented individual who picks flight over fight at any given chance. And yet there is a curious resolve in the way he behaves at the most opportune moments. Adil Hussain brilliantly manages to make Jogi’s conflicted man come across as both a victim of circumstances and a perpetrator of sinful acts simultaneously.

If Jogi’s protagonist is an outcome of chaos, Rajshri Deshpande’s Mohini is an agent of it. The ever-reliable Rajshri Deshpande brings her Mohini into the aforementioned Nirvana Inn encapsulated within a package of assured calm, eerie stares, and an unsettling demeanor. A clear nemesis to Jogi, Mohini revels in pushing Jogi to the brink of insanity.

Adding much spunk and flavor to the proceedings is Sandhya Mridul, who plays a writer and a permanent resident of the Inn, Leela. Sandhya Mridul plays her Leela with a childlike enthusiasm and definitive optimism which contrasts the whole thematic of the film, adding sunshine to the bleakness. Watch her in a small scene where she goes shroom-scouting across a riverbed, only to pick up some worthless ones. That one scene tells us, who’ve grown up watching Sandhya Mridul in various telly-shows, why we sorely miss watching her onscreen these days.

An Innovative Approach To Film Exhibition…

For those who want to catch this inventive horror flick at the convenience of their homes (given the second wave of the pandemic), you can catch it right now at a brand new streaming platform Cinemapreneur. The platform allows you to catch up with indie favorites and film festival favorites on a ticket-to-watch basis. Do check it out as one feels that this could be the future of streaming given the exorbitant subscription fee charges across the board by various OTT platforms. And to be honest, we’d prefer quality cinema over quantity. Much like Nirvana Inn.