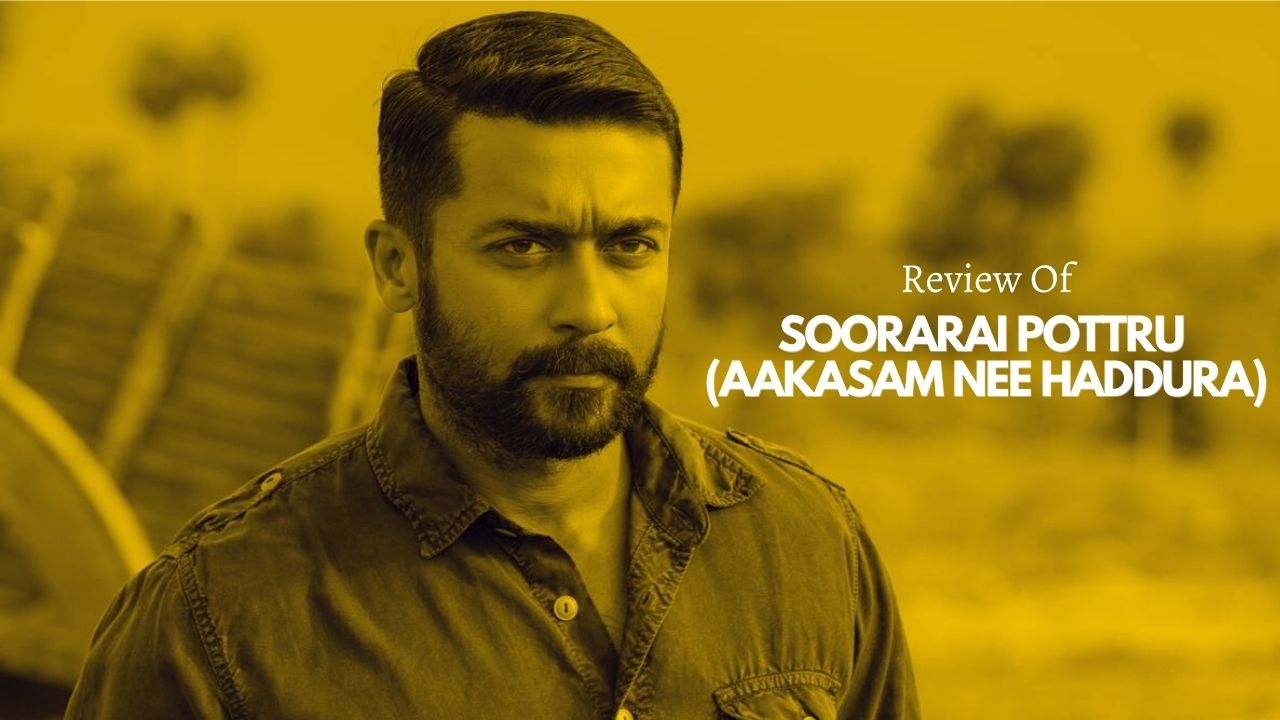 Soorarai Pottru: The Idea Of An Airline For The Common Man

Soorarai Pottru, one of the most anticipated films of 2020 is finally out on Amazon Prime Video. Directed by Sudha Kongara, who previously directed Irudhi Suttru (Tamizh), Guru (Telugu), the cast includes Suriya, Aparna Balamurali, Urvashi, Paresh Rawal, Karunas, Vivek Prasanna, Mohan Babu, etc. The film is inspired by the book, ‘Simply Fly’ and follows the life of Nedumaran Rajangam, a former IAF officer who quits the Air Force to start his own business venture- an airline company devoid of class differences. Soorarai Pottru is loosely based on the real-life story of Captain Gopinath, Simplify Deccan founder, and also, other events surrounding low-cost aviation in India.

To begin with, the solid and compact screenplay provides the initial take-off and maintains the pace consistently. The story was conceptualized by Sudha Kongara and written along with Shalini Ushadevi, Aalif Surti, Ganesha, and Vijay Kumar credited for dialogues. The dialect is deliberate and well-researched, keeping the film rooted in the protagonist’s humble beginnings throughout. Some of the scenes were staged wonderfully, especially when Maara first meets Bommi (Aparna Balamurali), a matchmaking scene that turns into two ambitious people fighting to cement their place in the world. The film does have high payoffs and incredible plot points, but a few of them lack the right setups or build up to those moments.

Primarily revolving around the struggles of entrepreneurship, the film traces the hurdles a simple man trying to envision a larger-than-life dream. Maaran, played by the outstanding Suriya, is the son of a teacher in a village close to Madurai. A rebellious kid by nature, he confronts his father’s beliefs with the utmost arrogance and sensible reasoning, which creates a rift between them. These character dimensions are explored beautifully for a mainstream film. The actors are given their own performance pieces tactfully and they nailed it perfectly. Except for Paresh Rawal’s character and Balaiyya who turn out to be cliche antagonists found in commercial dramas, minus the theatrics. Urvashi and Aparna Balamurali play the strong-headed Madurai women who are stubborn and fiery to get what they want. I’d love to see more of such female characters written, in Tamizh cinema. Mohan Babu is a delight to watch, and Karunas and Kaali Venkat add strokes of balanced comic relief to an otherwise serious drama.

It’s Suriya All The Way…

Now coming to Suriya’s performance, I have just one word- Wow! The film heavily relies on his acting potential and I’d say he’s come out soaring high. This is, by far his best film in the last 10 years. The first time we see this character Maara, he’s dancing flamboyantly to the Mannurandai song, in front of a corpse for a socialistic song, which is reminiscent of Ava Enna Enna from Vaaranam Aayiram set in a larger context. Maara has these one-liners that punch you in the gut and my favourite one being- “Neenga oru socialite, naan oru socialist.. Neenga vera, Naan vera.” (You’re a socialite, I’m a socialist. You’re different, I’m something else). The film switches between three timelines- a 19-year-old Maara in 1977 Sholavandhan near Madurai, then the 1995 period when he meets the love of his life and they each struggle to fulfill their ambitions and 2005 when Maara tries to keep his dream afloat with everything he’s got.

The teenager Maara, wow, an amazing transformation by actor Suriya, it takes immense dedication and sincerity to pull it off. You could hardly believe a 40-year-old man playing a 20 year flawlessly. The madness and insane passion that incessantly burns within Maara is portrayed beautifully by Suriya and his plights of class oppression resonate instantly. The ideologies and sensibilities of the characters are consistent and do not fade away to accommodate commercial film elements.

Niketh Bommi, the cinematographer cranks the camera beautifully as the frames seem lit by the dry, barren lands. A brown and golden hue shine on like the metaphor- there’s always hope even in the darkest of times. The frames are a visual delight and the editing is crisp and fast-paced, primarily focusing on the high points and avoiding all sorts of fillers.  Even though some callbacks are not immediately resonant, the makers are appreciative of the audience’s intelligence and do not push it to the extremes. The production design by Jacki is impeccable and capture the essence of the times gone by, thus, enhancing the nostalgia element of the era when pagers and long-distance calls were a luxury.

The edgy soundtrack by GV Prakash provides the right intensity and visual flavor, and Veyyon Silli, Maara’s Theme, and Mannurandai were my favorite picks of the lot. I hope they release a separate Youtube or music app version of the soundtracks soon.

The film is ambitious just like its lead characters and pushes the envelope for a mass star film. Highly relying on its performances and screenplay, the film could have been outstanding but settles for a sincere, honest attempt in the right direction. I think the makers would have adopted a wholly different approach had they known the OTT release agenda, but nevertheless, I’d love to watch this film on the big screen to get the wholesome theatrical experience.