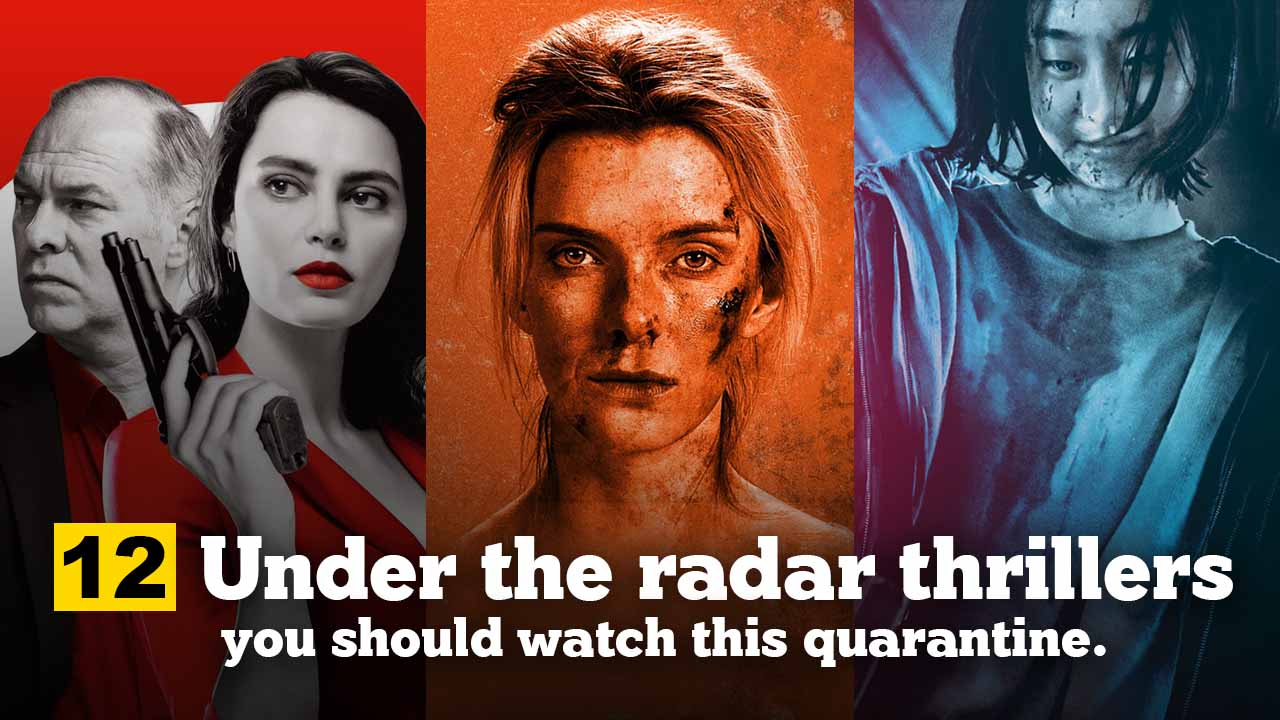 The Thrillers To The Rescue

The world is on the brink of something. We don’t know what it is, but we are scared of it. But there is a certain amount of catharsis that we feel when we feel that danger is just around the corner, yet miraculously we have whisked away from it. This is the feeling a good thriller generates in its viewer. While the whole world is living through an unending super slow-burn thriller, here are some underrated, edge of the seat thrillers that might take your mind off the chaos outside.

The film opens with a short clip showing the parasitic lifecycle of Cuckoos. We see a little cuckoo being born, which slowly grows larger than its own mother to the point that it commits matricide for the sake of gluttony. As soon as we see that disturbing vignette, we are thrown into a Kafkaesque interpretation of American suburbia, where a young couple played perfectly by Jesse Eisenberg and Imogen Poots are trying to buy a house. What follows is a series of bizarre surreal obstacles that change the lives of the couple, irreversibly and unimaginably. The film is a nightmarish allegory for parenthood in the 21st century, that will leave you in an existential crisis about the future of humanity. Hence, a perfect film for now.

If you are fans of the neo-noir classic Donnie Darko, this the movie for you. It is an ultra-cool psychological thriller that cleverly hides inside the structure of teen, coming of age, drama. The film follows a troubled college freshman, Luke, who suffers a violent family trauma. He then resurrects his charismatic childhood imaginary friend, Daniel, to help him cope, without realizing how dangerous Daniel is. The film plays with our perception of what is and isn’t real, making it a very immersive experience. It deals with pressing issues like childhood trauma, gun violence, prejudice towards mental illness, etc. with a lot of style to spare.

Mine 9 is a super low budget indie thriller, which makes use of its low budget to a stunning effect. The film follows the story of nine Appalachian miners, as they struggle to survive two miles into the earth after a methane explosion leaves them with one hour of oxygen. The film has a solid first act where it efficiently sets up all the conflicts and jumps straight into the action. The film is very sparse and is shot mostly in darkness using silhouettes, shadows, and dimly lit faces. This makes it all the more compelling as the claustrophobia over-whelms you by the end of the knuckle clenching 90 -minutes.

This is the kind of film that I got sold on purely listening to the premise. It is a romantic monster thriller that follows a heartbroken man who has to fight the monsters that have been mysteriously awoken by his breakup with his supposed soul mate. The film while dealing with this dark subject matter has a surprising amount of humor and heart. It very eloquently talks about deeply moving overtures of love while never shying away from the WTF moments right around the corner. Watch this film if you want a humorous deconstruction romantic obsession using Lovecraftian horror.

Invisible Man is the latest from the Aussie filmmaker Leigh Whannell. He has been a driving force behind horror mainstays like ‘Saw’ and ‘Insidious’. He recently made waves with his directorial debut, Upgrade. Upgrade, is a minimalist sci-fi thriller that is as heady as it is entertaining. So, I was waiting for his next film which happens to be a modern remake of the classic Invisible Man. And he definitely does not disappoint. He takes the familiar story of a man who becomes invisible and flips it on its head by taking on the victim’s point of view. He cleverly mixes in themes of stalking and patriarchal abuse making it eerily topical and relevant to the Me-Too era. You should definitely catch it because you don’t want to miss the tour de force performance from Elizabeth Moss.

Blood On Her Name

This is a deeply affecting thriller about the stupid decisions we make when under pressure and the deadly consequences attached to them. The film is meticulously constructed like a spiders’ web of events that perfectly lead into each other, giving the viewer a feeling of nihilistic eventuality. The piece is held together by the extremely melancholic performance by a mesmerizing Bethany Ann Lind. This thriller perfectly captures the idea of Murphy’s law in a narrative form, making it one of the most intense cautionary thrillers ever made.

The Witch: Part 1 – The Subversion

How can I make a list of thrillers without a Korean film? Hence, this sci-fi mystery thriller The Witch: Part 1. The Subversion. Made by the auteur behind films like ‘I Saw the Devil’ and ‘New World’, the film follows a high school student with amnesia who tries to uncover what has happened to her. All leading her into deeper troubles ultimately revealing a darkness she could not have imagined. This is billed to be a continuing saga; hence this film serves as an origin story to the teenage anti-hero of the series. The film is beautifully staged and acted making it a very engaging popcorn fun time.

Bacurau is a dystopian western thriller that is a sly commentary on the current state of capitalism, freedom of speech, and xenophobia. The movie follows A filmmaker who decides to travel to a village in the interior of Brazil to make a documentary. As days go by, he begins to discover that the locals are not exactly what they appear to be and hide dangerous secrets. The film starts off as a family drama and slowly morphs itself into a surreal nightmare with a chain of increasingly bizarre surreal events. You should watch it to believe it. Even if the commentary goes over your head, it is still a super fun surrealist fever-dream to witness.

Rojo like its name suggests is an intensely dark, sinister, neo-noir crime thriller. Set in pre-coup d’état Argentina, a successful lawyer starts to feel against the ropes when a secret of the past threatens his present. I am trying to be as vague as possible and trust me I am doing you a favor. You need to go into this film as fresh as possible. The film beautifully portrays the darkly comic story that is rich and evocative of the time and political climate it is set in. This is a must-watch to anyone who likes atmospheric and immersive cinema that moves at its own elliptical pace.

This is a film that is almost impossible to describe in any way that would make sense, hence making it the most cinematic film on this list. The visual poetry of the film cannot be widdled down into words and that is the humble opinion of this writer. But I will try anyway. It is a haunting story that follows a deeply insecure woman who buys a dress from a weirdly over-expressive shopkeeper. The dress then turns into a physical and metaphorical nightmare to the woman leading to the discovery of otherworldly energies. The film is definitely not for everyone. But if you want to be challenged thematically and tonally, there isn’t a better film than this. Coming from the enigmatic director who brought us the quietly melancholic ‘Berberian Sound Studio’ and the twisted ‘Duke of Burgundy’, this is a bewildering masterpiece. It is equal parts comedy, horror, thriller, and satire, but above all it is insane.

The Whistlers is a Spanish minimalist thriller that follows Cristi, a policeman who plays both sides of the law. His life is turned upside down when an alluring femme fatale comes to him with a plea to save her drug lord husband. The film is presented non-linearly in the form of chapters introducing the various facets of this underworld. The film shows a surprising amount of restraint in the way it presents itself. While it has style to spare, it is never over the top. It is almost suave in a way mirroring the character of the film who are filled with secrets but restrained to a fault. Do check out this film if you are into uber-cool neo-noir thrillers.

Finally, coming to the most controversial and headline-grabbing film on the list. This film was banned even before it was screened because of a mass shooting that happened tangentially to the release of the film. People felt that it could hurt communal feelings, which I call absolute bullshit on. Now that we are done with the externalities of the film, let’s talk about the film. This is a social satire on the political and class divide in America. The premise is that a bunch of rich liberals is playing a hunting game with real human beings who happen to be on the opposite side of their political beliefs, here they are conservatives. Kind of a riff on Richard Connell’s The Most Dangerous Game. Their game plan goes horribly when there is a glitch in the plan. This is a film that tries to be as moderate as possible and achieves it to a certain degree. If you like in your face political thrillers, this is made for you.

Which one’s are your favorite? Leave us a comment below.