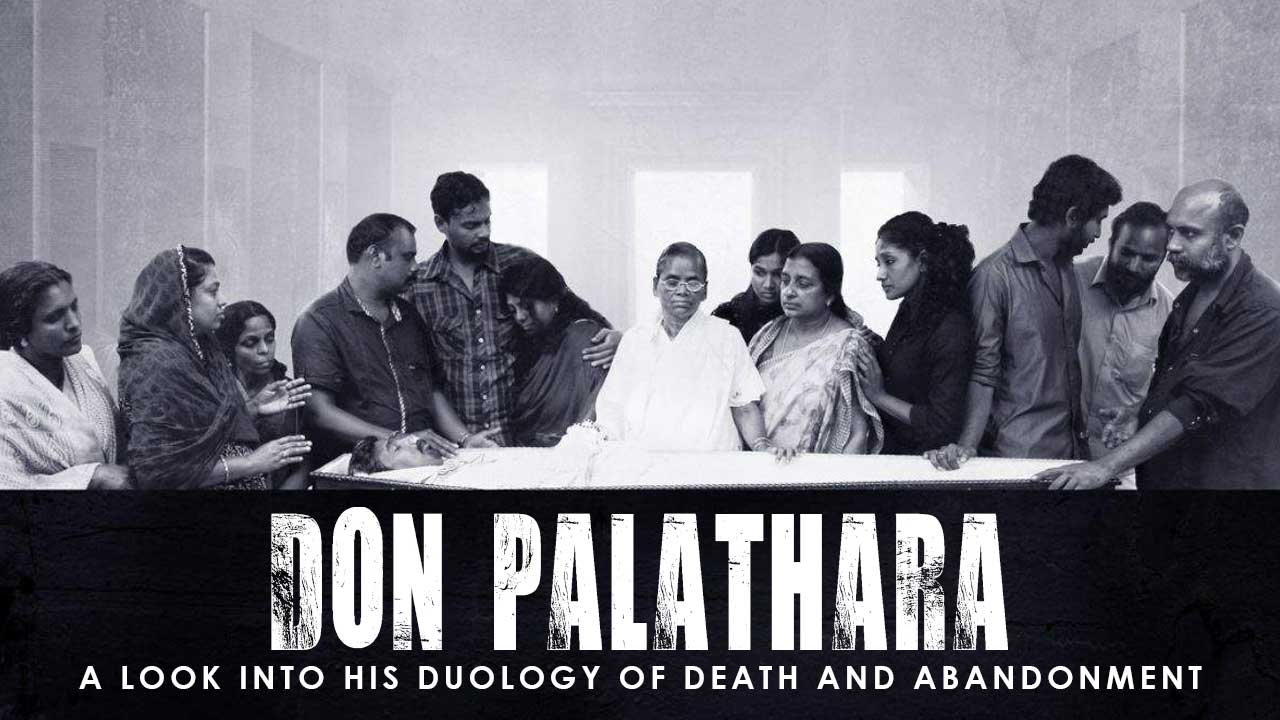 One day while lazing around on my couch and looking for something new to watch on Netflix, I came across this super-short black and white Malayalam film about a funeral called Savam. I thought that I have an hour to spare, so why not go for it. Little did I know that I was going to witness a masterpiece the likes of which I have seen very rarely in Indian cinema and I would discover a film-maker whose films I would eagerly await. It clearly looked like it was very low-budget, but had the sensibilities of some of the greats of cinema worldwide. During this quarantine, I saw his film second film called Vith. While the film has a lot of similarities to Savam, it is also very different in other aspects. So, I thought I will talk about his duology circumferencing around the themes of death and abandonment.

Savam: A Requiem of Absurdity.

Savam (which translates to a ‘corpse’) follows a group of people in a Malayali Christian neighborhood after they learn that one of the residents, Thomas Ittikora, is dead. We see the family, friends, and neighbors react or cope with the fact in their own eccentric and quirky ways. Through the course of the hour-long film, it immerses the audience in a community, their lives, their secrets, and their practices. Absurdist humor breaks out when the women of the household wail in competition and the men find it better to while away time by sipping on brandy. Death also, as it were, has its own entertainment value.

With both of his films, Don Palathara puts more of an eye on form than plot. It is more about how the world is presented to us than the minutia of people’s decisions or plot points. This is where his expertise as a documentarian comes out. He wants to observe rather than construct mise en scène. His keen eye for details ranges from an urgently speaking pastor, a disinterested woman who hides more than what she reveals, and of course the abstinence of faith in front of a wooden chaste cross.

Let’s look at the choices he makes to tell this morbid story. The film is shot (by Prathap Joseph) in black and white and uses a lot of deep focus. For me this choice allows the camera to turn as objective as possible. He is not using either pocket of color or focus to control the movement of our eyes. These choices allow us to look at any part of the screen and glean our own answers. A certain sense of pondering is attained. The film is almost completely devoid of a score which increases the objectivity of the viewer which is then exponentially increased by the film’s expert use of Sync Sound. The only subjective choice Don Palathara makes is the use of a handheld camera which almost mimics an unknown person observing this whole commotion. With all these choices we see a film-maker in full control of his craft immersing us into a world full of life during a funeral.

Vith: An Inter-Generational Feud of Ideologies.

Vith (translates to seed) is about the relationship between a farmer and his formerly city-based son, and their differing approaches to life. The father is pretty traditionally conservative and looks forward to a life that is more or less stable and the son has dreams of flying away with his dreams. This contrast is shown purely through their behavior.

I would like to say that his film-making skills have improved exponentially from Savam. This film is a lot quieter and more understated in its presentation. While the same amount of objectivity of a documentarian’s approach is still there, here it’s a lot more refined. The frame is still black and white and uses deep focus, but it’s very stable. The camerawork (by Subal KR) here is very stable and prefers to stay static on poetically composed shots, rather than the long tracking shots of the former. The shots just linger on a windy road or a group of trees before or after shots just to let the environment breathe. The film is also minimalist in terms of dialogue, as there is hardly any dialogue and we are asked to learn about these characters through their actions than their words. These improvements in the craft show his maturity in film-making.

With just his two films, Don Palathara has shown that he has a certain mastery over his craft and his themes get ever more distinctive and deeper with each new film he makes. His films remind me of the tranquillity of an Ozu film, the visual poetry of a Bergman film, and thematic daring of a Herzog film. In conclusion, I believe Don Palathara to be one of the most promising Auteurs coming out of India. Do keep a lookout for this skillful storyteller who is bound to become a trendsetter in the coming days.