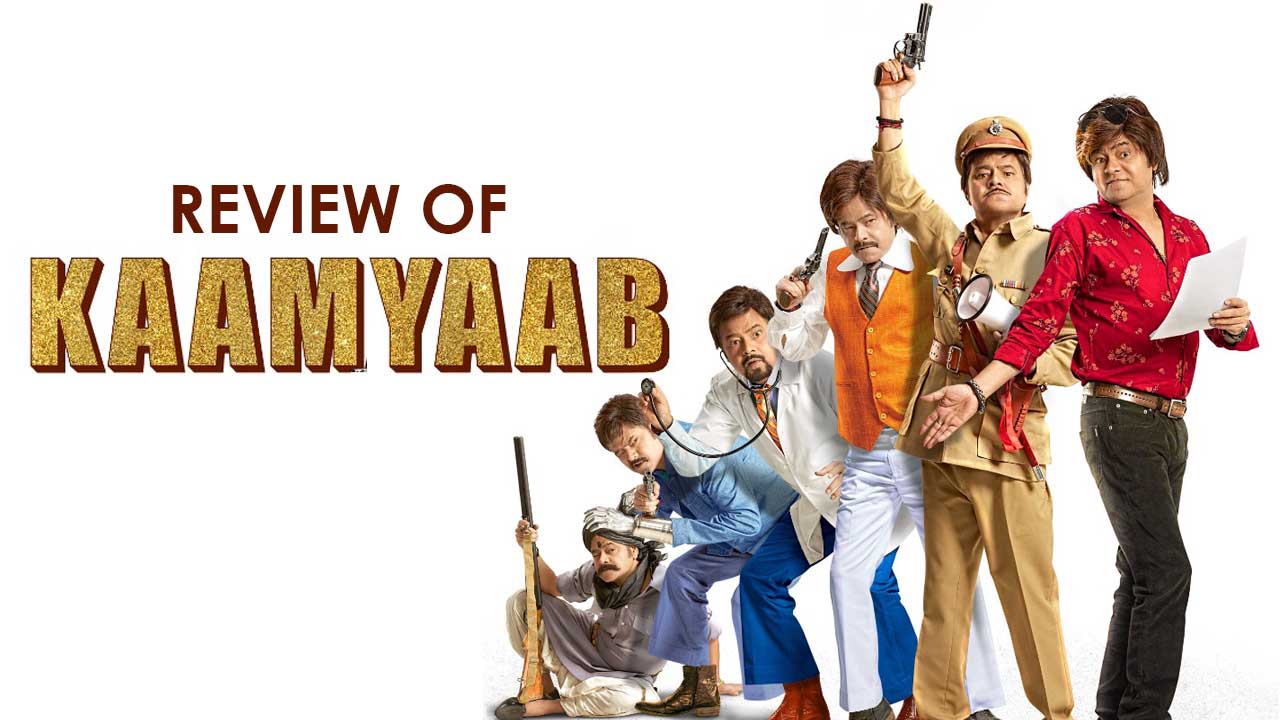 A Rare Gem Of A Film…

There are times when you go to watch a film and realize that you are witnessing history being created. The film ‘Har Kisse Ke Hisse.. Kaamyaab’ is bound to make you feel the same. Right off the bat, I feel the need to acknowledge the fact that the National Award-winning writer and director Hardik Mehta, has come up with a ‘once in a lifetime’ premise. The unique yet relatable story has come out at the right time and its relevance is purely remarkable. Kaamyaab was made back in 2018 and was premiered in October at the prestigious Busan Film Festival, and since then has been presented at various film festivals across the globe including the Jio MAMI Mumbai Film Festival last year. Produced by Drishyam Films and Red Chillies Entertainment, this film was released theatrically on 6th March 2020. Let’s delve deeper into this film and understand why this film is a treasure that needs to be nurtured with care.

The story of the film begins with Sudheer (played by Sanjay Mishra), a retired character actor, being candid about his profession and personal life in an interview. While conversing with them, Sudheer gets to know that he had retired with 499 films credited to his name. Finding it difficult to cope up with today’s fast-changing world, Sudheer sees this as a golden opportunity to be relevant again and decides to get featured in another film, so that he can create a unique record of featuring in 500 films. He then reaches out to one of his old acquaintances Gulati (played by Deepak Dobriyal), a retired actor himself, who runs a casting agency presently. Gulati agrees to Sudheer’s vision and joins Sudheer’s quest in finding the 500th role for him. From here begins Sudheer’s journey of trying to achieve a rare feat so that he can be included alongside the greatest names of the Bollywood.

On a premise level, the idea of having a side actor as a protagonist who wants to be relevant is purely mind-blowing. The fascinating part though is the way the writers Radhika Anand and Hardik Mehta go about in weaving this gem of a story. They make the structure simple and clear with a protagonist wanting to achieve a tangible goal. The way they deal with the complex human emotions, taking us through the harsh reality of a character actor is painful to watch and difficult to absorb. The screenplay is well thought out and the pacing of the story is perfect. Kudos to the writers for creating such an extraordinary story, wherein there is a scope for everyone to find and connect to the various emotions. Apart from the main character, other characters are so properly fleshed out, that despite some of them having less screen time, you’ll easily understand their life story. For example, Isha Talwar’s character which makes fewer appearances overall will surely stay with you, given the excellent arc and powerful scenes the writers have given to her.

The dialogues especially are written very well. They convey the character’s state of mind accurately while sounding raw and real. One of the recurring lines in the film, “Enjoying life.. aur option kya hai..” that adds a certain weight to the character and scene, is used brilliantly in different circumstances. The dialogues are short and crisp and are extended when needed.

The main man behind the grandeur idea of Kaamyaab, Hardik Mehta, puts his soul and sweat in every single bit of this film. It’s remarkable to see the kind of research that has been put in every thought. The scenes are constructed superbly and have a natural flow to them. Hardik makes sure that he doesn’t include a scene just because it looks cool. Every scene, character, and dialogue propels the story forward and takes you deep into this world. It is apparent in the film that Hardik’s communication regarding his vision with the crew and cast is crystal clear as it translates seamlessly onto the screen.

The biggest take away from the film is how outstandingly Hardik plays out the various emotions the characters go through, and deal with them with the utmost care. That’s pure genius. Hardik shows the struggles of character actors and junior artists in the film industry and brings out an honest and authentic reflection of what goes on behind the scenes. Hardik never shies away from exploring the various depths of Human emotions and doesn’t stick to the usual white or black characterization. Every character and their actions come from a specific thought process that they have. For example, although we sympathize with Sudheer’s desperation to get back into acting, we also understand his daughter’s opposing stand. Sudheer’s struggle with his profession and family on the parallel side plays out superbly.

Hardik stages the climactic sequence brilliantly and gives us a cathartic experience while making one last comment on the core thematic of the whole film towards its end. Just the fact that Hardik has translated such a magical story, a mere vision, into a visual brilliance, is commendable. Hardik Mehta is a talent who is going to explode in the coming times. Keep a lookout for this incredible filmmaker.

Hardik Mehta is ably supported by a greatly talented group of crew members. To begin with, the cinematography by Piyush Puty is static and smooth. The way some of the frames are constructed in the film adds a lot of nuances to the scenes, hence making them enriching. There are visual imageries created on many occasions that are purely a treat to watch. Look out for the scene where Sudheer gives multiple takes for just one shot. At the end of this scene, Sudheer’s defeated and tired state is beautifully captured by Piyush Puty.

This is very well supported by sharp editing done by Prashanth Ramachandran Jayalaxmi. Prashanth makes sure that the flow of the narrative doesn’t break or dip anywhere. The scenes play out in a perfect length giving the audience enough to understand what is being conveyed in the given scene. Rachita Arora enhances the situations of the film with her honest and soulful music. On many occasions, the music conveys the exact mood of the scene and makes us empathize with the characters in the frame. Even the composition of all the songs is great. The songs which add a layer to the narrative with their meaningful lyrics by Neeraj Pandey can be enjoyed listening to, otherwise as well.

The Side Characters Shine…

The biggest star of this film without any doubt is the incredibly talented and hard-working Sanjay Mishra. He puts in everything he has into the character of Sudheer. There’s a part of Sanjay sir which is reflected in Sudheer, and therefore, his performance looks authentic and real. Sanjay sir laughs, cries, shouts, stumbles and portrays various other things seamlessly. It’s heartwarming to see him play a protagonist who is a character actor. It is as if this character was made just for Sanjay sir. A tribute to every character actor, Sanjay sir makes sure that Sudheer never comes across as odd or unrelatable. We are already aware of the extreme range of skills he possesses, but with this film, Sanjay sir ups one level, and delivers one of the best performances that will be remembered for a long period of time. His performance, particularly in the climax, is a treat to the audience, and a lesson to the budding actors.

Another excellent performance comes from the amazing Deepak Dobriyal. Deepak brings a sense of calmness to his character and adds minute nuances to his character Gulati, which makes him instantly recognizable. He is on point in depicting a well-written character and stands equal to Sanjay sir’s performance, whenever they share the screen. Apart from this, he brings his A-game out while delivering some funny punches and quirky dialogues.

It takes a lot of guts to play yourself on the screen especially when the character has been given some grey shades. But Mr. Avtar Gill being such a sport enjoys the character he essays in the film. The sheer amount of skill set he has is unparalleled and something that we have witnessed over the years. He leaves us in awe of his performance once again in the film. His character arc unravels beautifully towards the end.

Another take away from the film is the young and incredibly gifted actor Isha Talwar. Isha has less screen time comparatively, but she shines whenever she appears on the screen. Isha has a very strong screen presence which one can witness in this film. The fact that her performance is vibrant even when someone like Sanjay sir is in the frame is a testament to the astonishing talent she has. She elevates the character with her brilliant performance and manages to tell a lot with just her body language. Isha Talwar is a talent that is bound to go on and give some of the greatest performances we can ever witness.

In a film about the side actors, the supporting actors like Sarika Singh, Akashdeep Arora, Mr. Birbal, and other actors do a great job of taking the story forward by their strong performances. They have some of the most hard-hitting lines in the film, and they individually shape up the narrative, thus making it strong.

In conclusion, I would like to urge you to please go and watch this film immediately. This is a film which we might not get in many years and is a must-watch. Hardik does a great job with the ending of the film which ties up the thematic of the film. No matter how much I say or write about the film, it won’t do any justice in telling how great this film is. Kudos to Superstar Sharukh Khan and Red Chillies Entertainment who makes sure this film reaches more and more people. In the end, I just wish that the film Kaamyaab receives more and more Kaamyaabi…