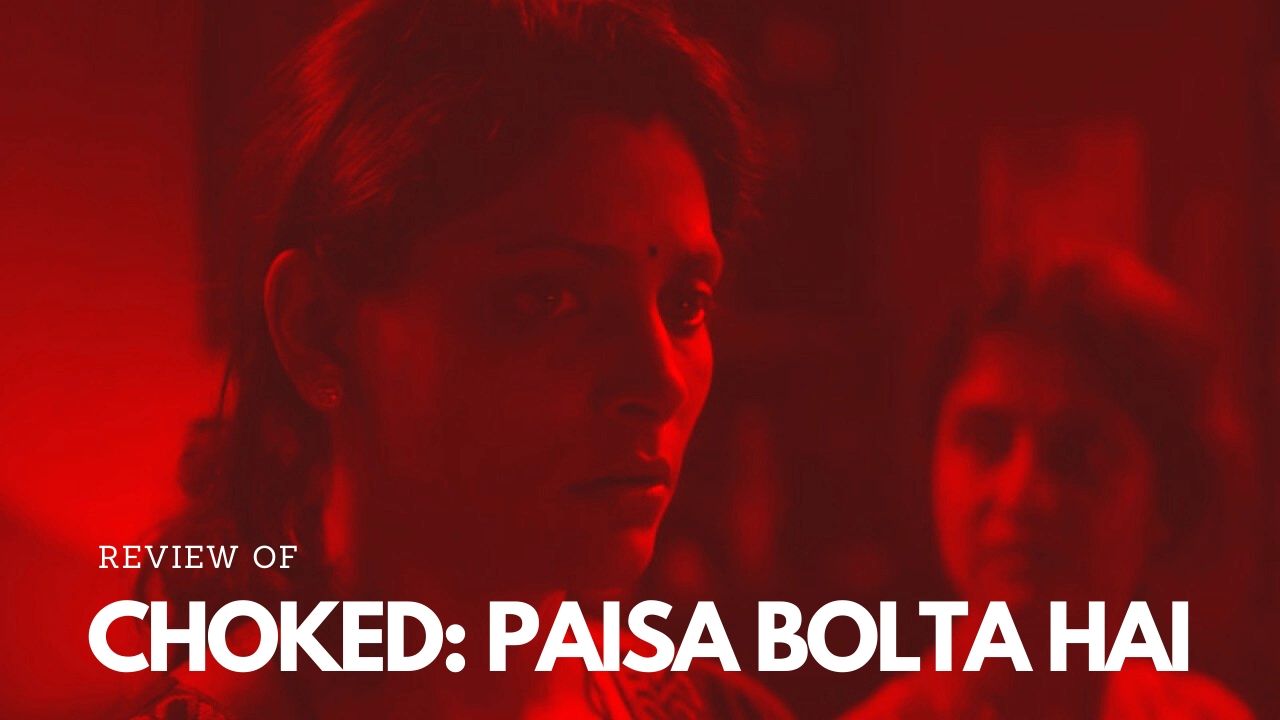 Choked: A Light At The End Of The Tunnel

The world is at peril, the world economy is plummeting and all I could think of was when do I watch the new Anurag Kashyap film. I am one of those guys who was introduced to world cinema through the work of Anurag Kashyap. He has been the flag-bearer for world cinema and one of the key reasons for the rise of quality in the Hindi cinema. While I wasn’t huge of his last two features, Mukkabaaz and Manmarziyaan, they were still worthwhile efforts. All I missed about them was the trademark edge and irreverence that his films normally possess. But when I watched the trailer for his latest film, I felt the old spark I last saw in Raman Raghav 2.0. I am saying all this to say that I went into the film with tempered expectations and boy was I happy to be proven wrong.

A Story of Greed and Redemption

While he has made a plethora of films ranging from lavish epics to intergenerational feuds to doomed love stories to serial killers, he has never made a film about domesticity and a small family.

Choked tells the story of a lower-middle-class family consisting of a failed musician father Sushant Pillai who has turned into a cynical couch potato (pun intended), Saritha his wife who had aspirations of being a great singer but has settled for a stable job at a government bank and their precocious little kid. They have a very loving yet volatile relationship owing to their financial problems.

But one fine day Saritha finds bags of money that are mysteriously popping out of her clogged sink pipe. Now what she does with this mysteriously money, where is it coming from, the nosiness of the neighborhood, how she hides this new avenue of income from the people in her life, demonetization, and the effects on this money and career form the rest of this twisty story.

A Well Calibrated Script That Falters A Little Towards The End…

Going with the trend of his recent films, Anurag Kashyap has not written this film. It is written by Nihit Bhave, whose work I am not very well versed with but will be looking forward to. His characters feel instantly recognizable and their conflicts palpable. There are a lot of verbal and visual motifs used by the writer to push across deeper angst against the oppressive “system”, other than the overt political lens of the film. He also manages to capture the milieu of a middle-class Indian family very well through their little idiosyncrasies and very naturalistic dialogue.

One of the scenes that comes into mind is the one where the characters learn about demonetization. The three characters on screen give drastically different reactions to the same topic which manages to capture the country’s panic and confusion at the time in one single unforgettable shot. My only problem was the pacing towards the end of the second act post demonetization where the story goes in multiple directions, none of which pay-off very satisfyingly. While there were still great moments towards the end, I just hope that it could have as focussed as it was in the first two acts.

The film lives and dies because of the outstanding performances by its cast of quirky and off-kilter characters. Amrutha Subhash as the couple’s nosy neighbor infuses the character with the perfect amount of middle-class apathy and vulnerability. Upendra Limaye as the creepy loan shark is extremely unsettling to be around. Roshan Matthew as the constantly undermined husband somehow manages to make this lazy character likable and we empathize with his plight as we realize that he is actually an honest but unlucky soul who loves his family wholeheartedly.

But the real standout here is easily Saiyami Kher whose eyes just light up the screen. She somehow manages to emulate all the little behavioral ticks of a middle-class broken-down woman to a tee. She is transcendent in this femme fatale character with a middle-class twist and I believe a star is born.

The Narrative Pieces Come Together Seamlessly…

This is where Anurag Kashyap has always shone the brightest. He manages to put together an eclectic mix of technicians to create a piece that feels wholly original. The jazzy new age score by Karsh Kale that makes the proceedings pulse-pounding when needed and melancholic when required. Sylvester Fonseca manages to capture middle-class Mumbai with the amount of grit, chaos, and beauty that it deserves. The editing is crisp and puts the proceedings of the film at the pace that the moment asks for. They perfectly complement each other in the most unexpected of ways.

Overall, this is a win for Anurag Kashyap’s new production house and NetFlix. This is the perfect film for the OTT era as it deals with huge and sometimes taboo ideas with not a lot of editorial control. It is a brilliantly performed, shot and put together film that is thought-provoking if you are not easily put off by politics you don’t agree with.