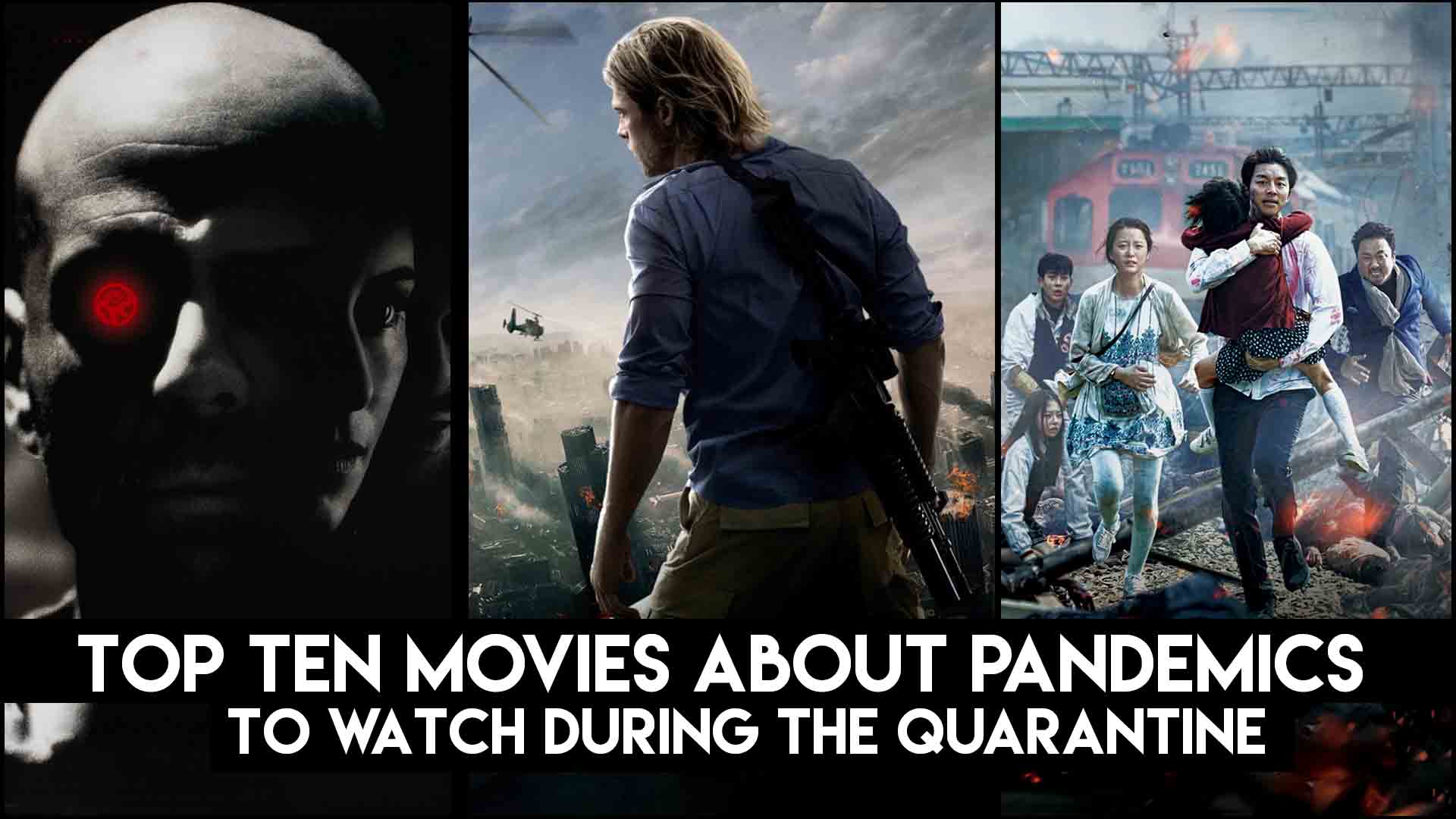 We are stuck at home for the unforeseeable, uncertain and unbearably long period of time because of the lockdown. While I agree that it is good for us. I don’t think I like it, just the same way that I hated exercising and healthy food. We might as well accept our fate and try to relax a bit. The news is constantly alarming and overbearing. So, my idea was to recommend to you guys some films which deal with pandemics and paranoia to get a better understanding of the human condition under such stress through the empathetic lenses of some of the best filmmakers on earth. I have chosen each of these films keeping in mind the different perspectives they bring to the pandemic issue.

Let’s start with some pulpy fun. Loosely based on the smash-hit book of the same name by Max Brooks. The film follows Gerry Lane (Brad Pitt), a former investigator who has to find a cure for the raging zombie pandemic taking over the world. This film deviates from the source material in a lot of ways, the most important of which is that this is a straight forward survival action drama, while the latter was more procedural and incidental. But where the film shines is in the way that the film adapts the structure of globe-trotting spy thrillers like the Mission Impossible or the James Bond franchises to tell a zombie apocalypse story and somehow succeeds in doing so. And the zombies definitely don’t disappoint.

One of the earlier epidemic movies, The Andromeda Strain is fairly straightforward: Based on Michael Crichton’s best-selling 1969 novel, The Andromeda Strain chronicles the desperate efforts of a team of four scientists to solve the mystery of a fast-mutating extra-terrestrial virus before it can spread throughout the world. The claustrophobic underground lab setting makes the film feel intimate even as the ramifications of the Andromeda organism are catastrophic and terrifying. While some may feel the film is outdated, the attention detail and the perspectives of these underappreciated heroes behind the cure who are hidden under a lab coat is undeniable. Directed with pulse-pounding urgency by the great Robert Wise, the film’s focus on science makes it that much more realistic — and frightening.

One of the most terrifying zombie movies yet is the 2016 action-horror explores a zombie plague in South Korea. A man is traveling with his daughter when an infected person causes a massive outbreak within the train. The film has a very simple premise and has all the tropes of any disaster movie out there. But where the film shines is in a simple fact that the filmmaker has chosen to represent the whole world through this train in the vein of movies like High-Rise or Snowpiercer. By doing this the filmmakers have immediately increased the stakes sky-high and the immediacy of the situation to unbearable levels. Hence, it moves at a breath-taking pace laying out the inadequacies of the human condition with extreme precision.

The Masque of The Red Death

Let’s go a little obscure and old school with this. My pick is the most experimental film made by the cult filmmaker Roger Corman. Adapted from Edgar Allan Poe’s book of the same name, the film is a medieval fable set in an unnamed Italian village, where a sadistic prince (Vincent Price) lords over both the poor villagers outside his palace walls and the debauched guests at a ball within. As a plague sweeps the land, he orders the village burned to stop it — but that doesn’t prevent the Red Death from ultimately piercing the palace walls. Masque may be a fantasy, but its ultimate message — that disease and death do not distinguish between rich and poor — holds true. One of the most interesting aspects of the film is the way it lays bare the shortcomings of the community if the leader is power-hungry, paranoid and cowardly.

It Comes at Night

Despite what the misleading trailer suggested this is not a zombie movie, but it is an infection film, of sorts, which sees a couple and their teenage son self-isolating in the woods because of an unseen threat that’s taken over the world. But when a young couple and their child arrive seeking refuge the family’s domestic stability is shaken. The film concentrates on a small group of misinformed/uninformed people whose paranoia ultimately gets the better of them. The film again excels due to the perspective it gives us. This is one film which we quarantined at home definitely feel like. It shows that under crisis, we are not alone due to the lack of other people, but we feel alone because of paranoia caused due to the lack of trust in other people. This is a beautifully sparse paranoid thriller that should not be missed.

This is Danny Boyle’s eccentric take on the zombie genre. It is one of the films that popularized the idea of fast zombies and exponentially increased the efficiency of the zombies. The outbreak in the film is caused by animals infected with a virus. These aren’t just reanimated undead, but sick people. The virus is nicknamed ‘rage’ and sees the infected become insanely violent and highly contagious. Our protagonist is Cillian Murphy, unaware of the virus because of a stint in hospital in a coma, who finds London a deserted wasteland just 28 days after the outbreak began. This perspective makes the film stand out. Danny Boyle here is not interested in the outbreak but more interested in the aftermath and the survival instincts required to live through those circumstances. Hence, making it one of the most rewatchable and profoundly disturbing movies ever made.

Aashiq Abu’s Virus is an investigative medical thriller that is set in the backdrop of the 2018 Nipah virus outbreak in Kerala. The plot is set in Kozhikode and follows the various stages of the epidemic from identification to its total eradication. This film is a masterclass in giving exposition in the most organic way possible. As the film lays out the arduous process that it took to eradicate the virus in painstaking detail, we learn about the various strangers who had to come together to save their community. While there are very emotional stories to be told here, the film never becomes exploitative or melodramatic with its tragic parts. The film excels in all aspects from the precise cinematography by Rajeev Ravi to the minimal but hypnotic score by Sushin Shyam to the amazing performances by the huge ensemble cast with too many big names to list out. The film is not higher on the list because of one film that does the takes the same approach but executes it a tad bit better.

The thinking man’s dystopian thriller, Children of Men presents the world on the brink of collapse, ravaged by pandemics, war and above all, a mysterious plague that renders all women infertile, eradicating any hope for humanity’s continued existence. The United Kingdom is one of the last functioning countries and hopelessly overrun by refugees fleeing the chaos, transforming the country into a police state with the armed forces oppressing increasingly militant migrants. But when an African refugee becomes the first woman in nearly 20 years to become pregnant, it’s up to a cynical civil servant (Clive Owen) to escort this last vestige of hope past the warring factions to England’s south coast, where a ship full of fertility scientists await. Also starring Julianne Moore and Michael Caine, Academy Award-winning director Alfonso Cuarón combines gripping action with deft social commentary; it feels all the more relevant in a post-Brexit, Trumpian Corona-ridden world.

While all of the other films on the list deal with the when what, where and how of the pandemics. This film bravely chooses to answer the why and somehow makes it more nihilistic than previously imagined. Monty Python alum Terry Gilliam is one of cinema’s great eccentrics, and his films tend to either be quirky triumphs or glorious failures. 12 Monkeys is definitely the former, starring Bruce Willis as James Cole, a time-traveling convict from a craptastic future where mankind lives underground after a man-made plague wiped out 5 billion people. Supposedly unleashed by the militant animal rights group “The Army of the 12 Monkeys,” Cole is tasked with going back to 1996 to locate the original strain so future scientists can synthesize a vaccine. Unfortunately, he ends up in a mental institution instead, harangued by paranoid schizophrenic Jeffrey Goines (a young Brad Pitt), who may be linked to the pandemic, and after multiple trips between past and present, finds himself doubting his own sanity. Questioning reality, memory and humanity’s place, 12 Monkeys is eerily prescient, bringing up many topics that are still hot-button issues today, like animal welfare, crass consumerism, and environmental collapse.

It’s the movie on everyone’s minds and yes, well worth the watch. The story, about a virus that sweeps the world and kills people within days of infection, is gripping. Steven Soderbergh’s realistic depiction of what might happen in the wake of a pandemic sees doctors struggling to identify the cause of a deadly virus and attempt to develop a vaccine while cities are under quarantine, false reports are causing panic buying, and supplies of the inoculation aren’t sufficient to treat everyone at risk. Featuring an all-star cast including Kate Winslet, Matt Damon, Laurence Fishburne, Jude Law, and Gwyneth Paltrow it’s a classy and slightly terrifying look outside our own window. This film is the only reason our own ‘Virus’ is lower on the list because Contagion does all the things that film wanted to do a lot better at a bigger scale. While it is not based on real events, it still manages to be eerily prophetic.

While these are the films that made the cut, there are a bunch of films that need to be honorably mentioned like, The Host (Bong Joon Ho), Outbreak (Wolfgang Peterson), [REC] (Jaume Balagueró and Paco Plaza), and a lot more that I might have not been aware of. But please be safe, let’s stay home together, and hopefully, get through these dark times intact as a functioning society.