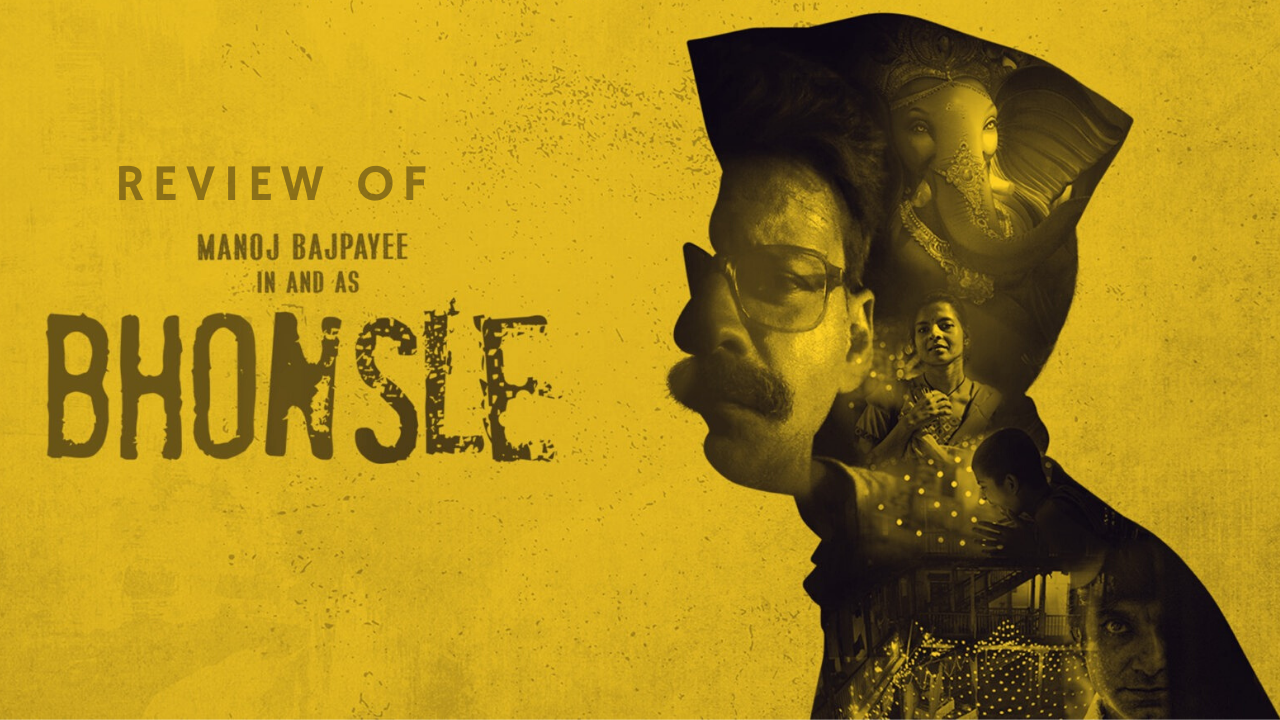 Bhonsle: A Window Into A Lonely Soul

The film opens with a montage of Lord Ganapathi’s statues in various stages of decay, intercut with shots of Bhonsle, a retiring constable on the last day of his work. His world seems dark and dreary, his life uneventful. He does not talk much and when he does, his voice is coarse and undecipherable. He lives in a house that leaks all through the day and eats the same bland food day after day. Through this skilfully put together montage we learn that this man is at the end of his rope and does not really have anything to live for. With the way he dresses and carries himself, we learn that he used to be a feared man in his hay day, but the glory of the past has turned into nothing but a fading memory.

A Man With Nothing To Lose

Into this depressing existence, a glimmer of hope appears in the form of a Bihari family that moves into his adjacent flat. The family is made up of a nurse Sita (Ipshita Chakraborty Singh) and her kid brother Lalu (Virat Vaibhav). It’s the time of the year where the city of Mumbai is getting ready for Ganesh Chaturthi. Political unrest ensues between different communities in the form of a taxi driver with political aspirations, Vilas (Santosh Juvekar). He wants to use the festival at the dilapidated Chawl as a symbol of his people’s dominance. What a man with nothing to lose can do when he sees injustice in front of his eyes, forms the rest of this explosive mood piece.

Visceral Cinema With Something To Say

Devashish Makhija, who has made a name for himself making visceral and hard-hitting films as Tandav and Ajji has again made a thought-provoking masterpiece. With this film, he is a lot more subdued yet the political commentary seems overt. He manages to talk about important themes like the growing threat of nationalism, xenophobia, feminism, wealth gap, political conspiracies, etc. in a mature and organic way. The writing is mature and economical. It never seems preachy as he uses a well-worn story of ‘A man who has nothing to lose’ and loads the film with clever subtext to create a small-scale film with mammoth ambition. The filmmaker manages to pull this off without a hitch.

When the writing is this skeletal and introspective, you need a cast that can bring the layered and nuanced writing to life. Manoj Bajpayee who shoulders this film on his extraordinary talent manages to convey the decades of pain hidden inside this man with just the flick of an eye or a labored sigh. His stoic appearance is a choice to keep from getting hurt again. He has almost no dialogue in the film, yet manages to captivate you even when he is not on screen. He is supported by the uniformly brilliant performance from the empathetic Ipshita Chakraborty Singh to the immensely lovable Virat Vaibhav and the maniacal yet naïve Santosh Juvekar.

A Soundscape That Will Astound You…

Getting to behind the scenes, three aspects stood out. Firstly, the gritty and aesthetic cinematography by Jigmet Wangchuk that manages to convey the eternally depressing, nihilistic tone of the film. This is aided by the melancholic score by Mangesh Dhakde that is used sparsely throughout the film at important moments to create a kind of musical punctuation. But the real standout for me was the sound design. The overall soundscape of the film is masterfully done with the use of diegetic and non-diegetic sounds like receding waves, railway tracks, a ticking clock, religious celebrations as motifs to convey dramatic moments.

To conclude, the film is a grim, gritty morality tale that manages to emotionally captivate the audience while at the same time asks relevant questions about our society. It’s a thoughtfully put together mood piece that is an artistic victory.