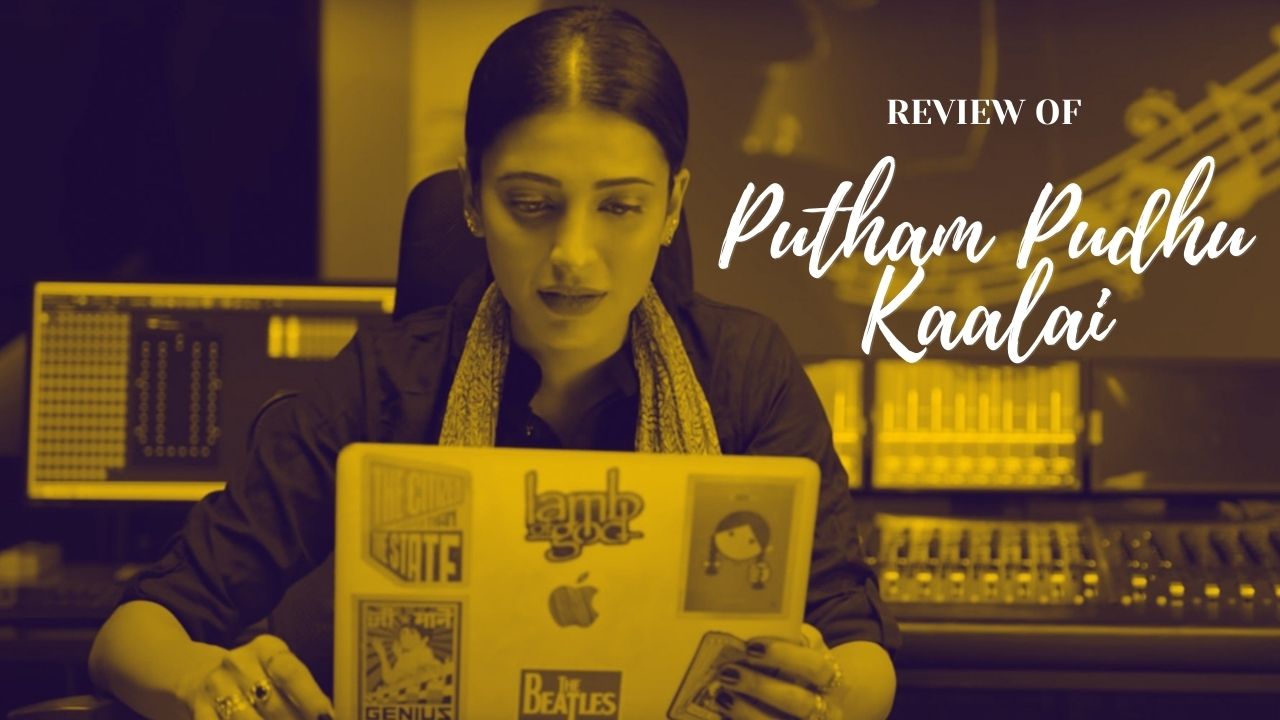 Amazon’s first venture into the South Indian film space is a Tamizh anthology helmed by eminent and sought-after names in the Tamizh film industry namely, Suhasini Maniratnam, Rajiv Menon, Gautham Vasudev Menon, Sudha Kongara, and Karthik Subbaraj. There’s also an immense amount of expectations that comes with this and ‘Putham Pudhu Kaalai’ tries to balance out the sober reality of 2020 with its exaggerated with optimistic themes and refreshing visuals. It tries to mine a middle ground for itself, but somehow only manages to find it in a superficial sense. In this collection of 5 shorts or short films, you can handpick the “awe” moments and the aftertaste the film aspires for is almost unfelt, broadly speaking. But despite its flaws, the writers and directors seem to have found a suppressed creative liberation of sorts, that is restricted in the mainstream theatrical features which are generally star-studded pieces and lacking note-worthy performances. Across all the shorts, you see protagonists ranging from youth to old on the age spectrum, which promises a refreshing and unique storytelling experience but only… A few handpicked moments do.

Directed by Sudha Kongara, and screenplay by Francis Thomas and Shruti Ramachandran is a quirky take on love lasting decades which remains unfulfilled. Watching Jayaram and Urvashi was overwhelming and cute, almost nostalgic to the Panchathanthiram times. In addition, Kalidas Jayaram and Kalyani Priyadarshan just sizzle on screen. This short hit the right chords and has a deliberate Alaipayuthey backdrop to it, to showcase the quarrels that develop between two people who have overstayed their adventure as gradually bittersweet romance ensues with a tint of separation leading to a mutual deal of acceptance.

The cinematography by Niketh Bommi was a combination of delightful handheld shots that capture the adventures of romance in a visually interesting manner. And personally, I loved the visual mood of this one the most. I truly enjoyed the musical bits that capture the abstract emotion, unlike the forced expositional dialogue. SP Charan’s voice left a melancholic aftertaste for me, reminiscent of an era gone by. Fun fact – The title is an old Ilaiyaraja song reference, referring to the youthful bliss attached to the concept of love.

Directed by Gautham Menon and written by Reshma Ghatala is a conversation filled short beginning with the typical voiceover style like any GVM film. Starring Ritu Varma and MS Bhaskar, it revolves around a friction-infused relationship between a granddaughter and grandfather. It has its moments, especially the emotional breakdown of a father’s unfulfilled ambition for his daughter, that had a resounding effect on me. After a long hiatus, it is gratifying to witness MS Bhaskar in a terrific performance especially on a global platform.

The camera maverick, PC Sreeram cranks out the beautiful visuals but there’s a monotone in the lighting and a bleakness you cannot help but notice. An interesting collaboration comes to the fore, that of GVM-Govind Vasantha which includes a mesmerizing track by the revered Carnatic and playback singer (also a frequent GVM collaborator) Bombay Jayashri Ramnath. It was evident that GVM used this platform to explore his style further, especially with the increased use of English dialogues and classy, non-heroic protagonist driven narrative. Interestingly, The title is a line from the song Avalum Naanum from GVM’s previous directorial venture Accham Yenbadhu Madamayadai.

Coffee, Anyone? By Suhasini & Mani Ratnam

Written by Suhasini and Mani Ratnam, and Directed by Suhasini, ‘Coffee Anyone?’ revolves around the stubborn nature of an elderly husband (played by the underrated actor Kathadi Ramamurthy) who denies subjecting his wife to the ICU treatment whereas his three daughters played by Suhasini, Anu Haasan and Shruti Haasan, (a Haasan-isque casting coup of sorts), refuse to take the same standpoint. Their mother, the charming Komalan Charuhaasan makes her acting debut after almost witnessing over 50 years of cinema within the family.

Shruti Haasan plays her role to the T and gives an all-round performance. Kathadi Ramamurthy and Anu Haasan who make their on-screen appearance after a long break, are like this fresh breeze on a summer afternoon. The staging and cinematography of the entire short seem a tad bit old-school and melodramatic, slowing down the pace. Like the other two, it has its dialogue moments, tear-jerker emotions, and playful gestures you’d expect from a signature Suhasini film. The film is packed with varying emotions and feature-length capable storylines that do not mature completely due to the lack of screen time.

Written, Shot, and Directed by Rajiv Menon of Minsara Kanavu (A song reference pops up the nostalgia) fame, the film traces the chance meeting of two school friends who grew apart with time. It is a mature, non-judgemental take that underplays its points of conflict and makes for pleasant viewing. Andrea Jeremiah who plays a drug addict and pop singer/songwriter is the show-stealer definitely. Sikkil Gurucharan who plays a doctor is a charming surprise. He reminded me of the handsome gentleman vibe of Arvind Swamy in the 90s. Leela Samson’s character is similar to that of Bhavani from OK Kanmani, minus the Alzheimer’s part. A few poetic dialogues and jokes land; the others just brush by like a miss-able afterthought. The cinematography and music elevate an otherwise minimalistic story. My favorite scene was when Leela Samson describes the trivialities of her marriage.

My personal favorite of the five, ‘Miracle’ written and directed by Karthik Subbaraj of Pizza (there’s a tiny reference) fame, the film leaves a satisfying aftertaste. Entirely focused on plot, unlike the other four-character driven stories, the variation is refreshing and makes for an exciting prospect. Shorts being Karthik’s ballgame entirely, the craftsmanship in the writing and making is starkly evident. Joining hands with his frequent collaborator, Bobby Simha, and his comrade in arms Sharath Ravi, playing two petty thieves who aspire for biryani amongst the turmoil. The setup, payoff, and twists are paced perfectly and the film proudly rears its head like an MS Dhoni finisher shot.

An intricately woven plot with crackling visuals, quirky third-world characters who curse, and a godman who preaches the power of miracle unaware of his dire fate. A satirical tale indeed!

While the first four short films deal with first world problems faced by upper-middle-class individuals, the final one by Karthik Subbaraj stays rooted and relevant; the gamechanger that leaves you with a smile. A decent watch with your family on a weekend and a good first venture by Amazon to penetrate the South Indian market base.