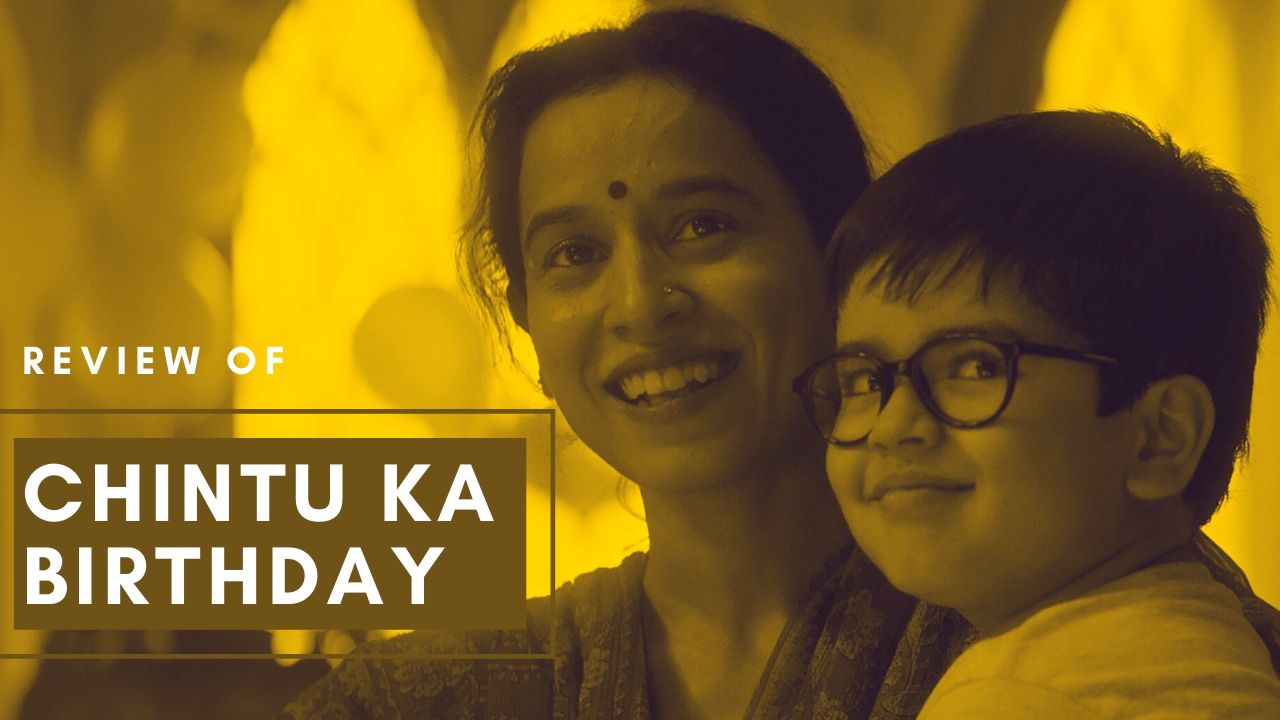 Chintu Ka Birthday, written and directed by Devanshu Kumar and Satyanshu Singh got its release finally today on Zee5. This film which was made a few years back has been creating a buzz at various film circuits for a while now. Let’s delve into this film and try to understand its world and the people involved with Chintu on his birthday.

The story begins with Chintu (played by Vedant Chibber) who is pretty excited since it’s his 6th birthday. His family, which includes his calm and composed father Madan Tiwary (Vinay Pathak), his hard-working mother Sudha (Tillotama Shome), his sister Lakshmi (Bisha Chaturvedi), and his maternal Grandmother, Nani (Seema Pahwa), are preparing for Chintu’s birthday party which is to be held in the evening.

While everyone is busy with their preparations, through Chintu’s pondering, we get to know that the backdrop of the story is set in 2004 at the time of the US invasion of Iraq. While the Indian government at the time, claims that it has brought back all the Indian families to India, in reality, there are some illegal migrants who are still stuck here in Iraq. And Chintu’s family is one amongst them, who is waiting for the immediate opportunity to go back to their home country.

As the family is getting ready to celebrate Chintu’s birthday with the help of their kind-hearted Iraqi landlord Mahdi (Khalid Massou), two American soldiers barge into Chintu’s house on the back of some suspicion, and from here onwards we see how Chintu’s wish of being able to celebrate his birthday starts crumbling. What happens next forms the rest of the story.

A Microscopic Study Of A Global Issue…

The premise of the film, as you can see above, immediately attracts one’s attention towards it. A family’s quest to celebrate their youngest one’s birthday while there is a constant fear and tension due to the war backdrop is quite fascinating to witness. The screenplay is constructed in a way that it sets up the whole dynamic of the story broadly and then takes us deep into its layers. The various aspects like the family dynamics, the father’s history, the political situation, and the whole scenario of the war is dealt with the utmost care and it never convolutes or interrupts the narrative.

The biggest challenge and the USP of this film are that the whole film plays out in just a single location, which is Chintu’s house. It really works well for the narrative and creates a sense of panic and urgency which makes us relate to the characters instantly and empathize with their fear. Kudos to the whole team involved as they pull it off seamlessly. The cinematography by Siddharth Diwan looks fresh and captures the emotions perfectly despite being challenged by the limitations of a single location.

On many occasions, Siddharth uses the setup to his advantage and creates some brilliant shots which are bound to leave you mesmerized. Naren Chandavarkar and Benedict Taylor elevate the emotions of the scenes with their fitting music which helps in understanding the narrative better.

The film heavily relies on its cast and they deliver it with their incredible performances. Vinay Pathak and Tillotama Shome make their character lively by their nuanced performances and additionally do well in delivering the beautifully written dialogues. They are ably supported by Seema Pahwa and Vedant Chibber. Vedant in particular gets to showcase his skills and he does a good job with his craft. The innocence needed for the character is carried very well by him.

Special mention to the casting of the film which fits perfectly with the characters of the story. Mehroos Mir who plays Waheed is bound to impress you with his amazing body language and snappy dialogue delivery.

Devanshu Kumar and Satyanshu Singh do a good job as the directors of this relatively short and sweet film. They set up the narrative very well in the beginning and then let the characters take over and move the story forward. They build the scenes well and allow them to play out with a steady pace as there is a lot to grasp in many scenes. The subtle commentary on the backdrop is packaged well alongside the story.

The compressed feeling they create with a cramped up location and how the characters’ dynamics change between them, is a treat to watch. The pacing of the film dips a little bit towards the end but then they make that up with a well thought out climatic sequence.

Streaming on Zee5, Chintu Ka Birthday is a film that can be watched to understand the emotions of a migrant family stuck in an unusual situation. Another interesting factor to look forward to in this film apart from the brilliance of its writing and performances is how a whole film is pulled off seamlessly in just one location. Cheers.