[VoxSpace Life] I Am A Girl And I Smoke : Oh For God’s Sake Deal With It 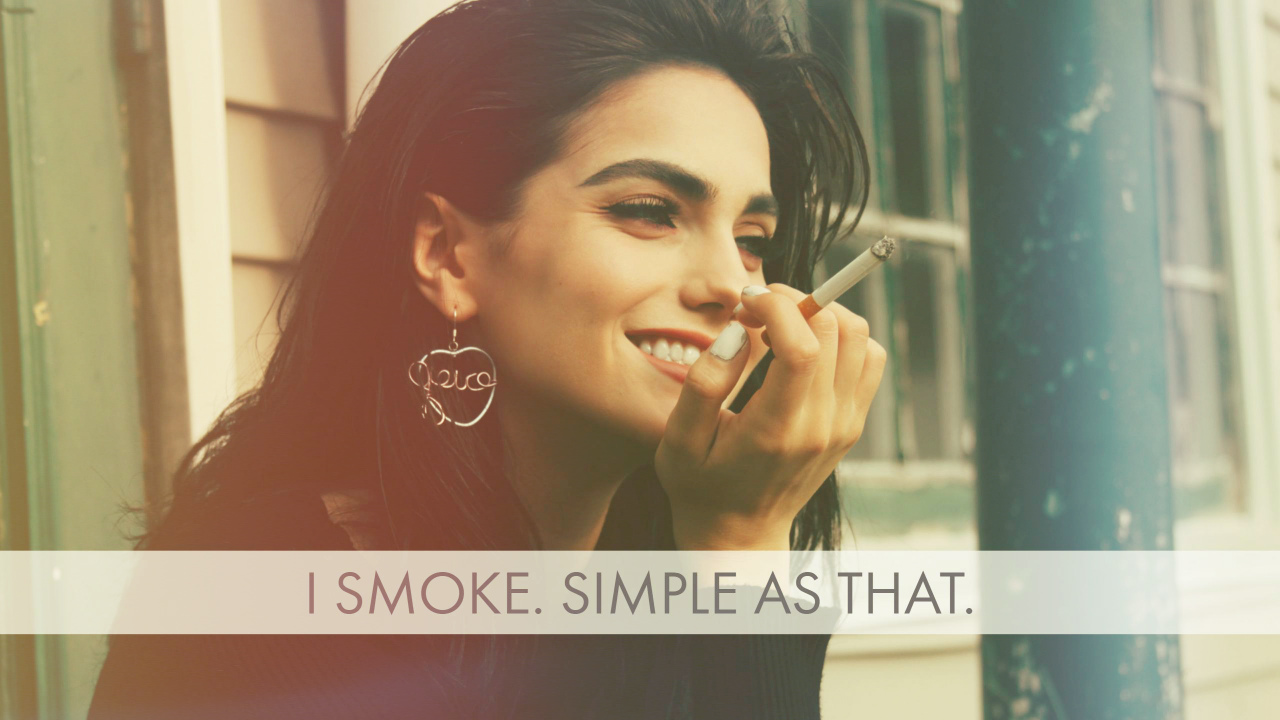 I Smoke. I Do. Simple As That

So, I am a girl and I smoke. I try not to hide the fact that I do. Now, before I go any further on this topic, here is the disclaimer – my intention isn’t to glorify smoking. It is a health hazard that can have a serious impact. I literally experience it every day, when I climb the stairs or run to catch a bus or an auto. But, what can I say? I am just a flawed human.

Now, every smoker is always bombarded with advice from non-smokers about the hazards of smoking. However, for men, the advice is generally limited to health concerns, whereas for women it becomes a matter of character, morality and modesty. I am ‘fast’, ‘loose’ and ‘arrogant’. Why? Since I am a girl who smokes and is unapologetic about it.

Once, a friend of mine told me that he thought I was unapproachable because he saw me smoking. Like really? Even though smoking is not the best habit to have, it does not make you a scary person. In fact, some of the stereotypes I have been subjected to are just bizarre.

Once a group of angry men-haters expected me to endorse their angry rants. I think they were misled by the cigarette in my hand. After all, why would I smoke if not to prove myself a rebel? Well, I am just an idiot who likes the taste of smoke. Sorry for disappointing.

Being An Indian Woman I Smoke – Is It The Biggest Issue Out There?

So, I love my kurtas, bindis, bangles and jhumkas. I usually wear all this. A colleague of mine was bewildered to see me smoking and exclaimed that he never expected me to be a smoker since I dressed so ‘Indian’. I did not know that looking ‘Indian’ could prevent you from becoming a smoker.

In fact, a close friend of mine who was familiar with my smoking habits, discouraged me from smoking in public as I was wearing a saree. Apparently, there is something ‘weird’ about a woman smoking while wearing a saree.

Now, smoking anyway is an expensive habit to have. I cannot really revamp my whole wardrobe and commit to dresses which are friendly for a smoker. Just for the record, I doubt a man has ever been told that smoking while wearing dhoti-kurta is weird.

I studied at the University of Hyderabad and while the Rohith Vemula issue was going on, we had people from all over the country, who came in to stand by us during the protest. I remember this one lady, an activist from Punjab, who came all the way to Hyderabad to join the protests. Now, one day, me and a couple of other girls were sharing a smoke when this lady came up to us and said we should not be doing this, in a rather angry tone. We looked at her, really confused, and it took us a while to understand she was talking about our smoking. She said, “It is just not right. You people cannot do it, you are a bunch of decent girls. How can you do this?” And again, just for the records, there were at least 20 men around us who were engaging in the ‘heinous’ act of smoking, but that did not seem to bother this lady at all.

Quit Smoking For The Betterment Of Society – Whaaat?

Back in Kolkata, which is my hometown, my college was in a locality that was a major residential area in the northern part of the city. There were so many instances, where my friends and I were asked to leave an area since some of us were smoking. An angry aunty would come to the balcony and shout to express her displeasure. She would remind us that this was a ‘bhadro loker para‘ (a locality for respectable people). However, the sacredness of that locality was never compromised when the front porch of her house was used by boys to smoke, not just cigarettes, and pass lewd comments on girls who walked by.

I remember putting up my picture with a cigarette in hand on my social media account. To which, an alumni of my college commented, “Cannot believe the culture of our college has gone down like this.” This is one of the many comments that I have heard over the years. Equating women smoking to a culture which ‘going down’.

Now, as a student of mass communication, we study ‘culture’ as a complex term. And boy, were those classes difficult to grasp. If only I knew, that a woman and a cigarette are all it takes to define the term.

From answering a cigarette seller, as to why I am buying a pack of cigarettes and who is going to smoke it, to people gawking shamelessly, passing judgemental comments and often being subjected to hardcore moral policing, the struggle is real. Women would look at each other with scandalised expressions, men would grin knowingly, young group of girls would giggle, young group of boys would call their friends to show them the spectacle and elderly people would instantly tag it as the leading cause of the decay of our generation. Often, it is empowering to think that me and my cigarette capable of single-handedly bringing down our civilisation and ‘culture’.

Smoke Up And It Might Effect Your Procreation Abilities ?!

Even a few people with genuine concerns about my health have advised me to stop smoking because it might interfere with my procreating abilities. The health advice for the men who smoke is generally restricted to the fear of lung damage. Though both concerns are scientifically valid for men and women, those people are okay with me having a damaged lung, but definitely not a damaged reproductive system. Me not breathing is fine, as long as I can produce babies. Talk about choosing the lesser evil.

As a smoker, I sincerely hope that the cigarette does not possess the ability to tell the gender of its patron. And if it does, my life is in a great danger. Much, much more, than that of my fellow smokers from the other gender.