[VoxSpace Life] The Nostalgia Of New Things : My Tryst With The Hyderabad Metro 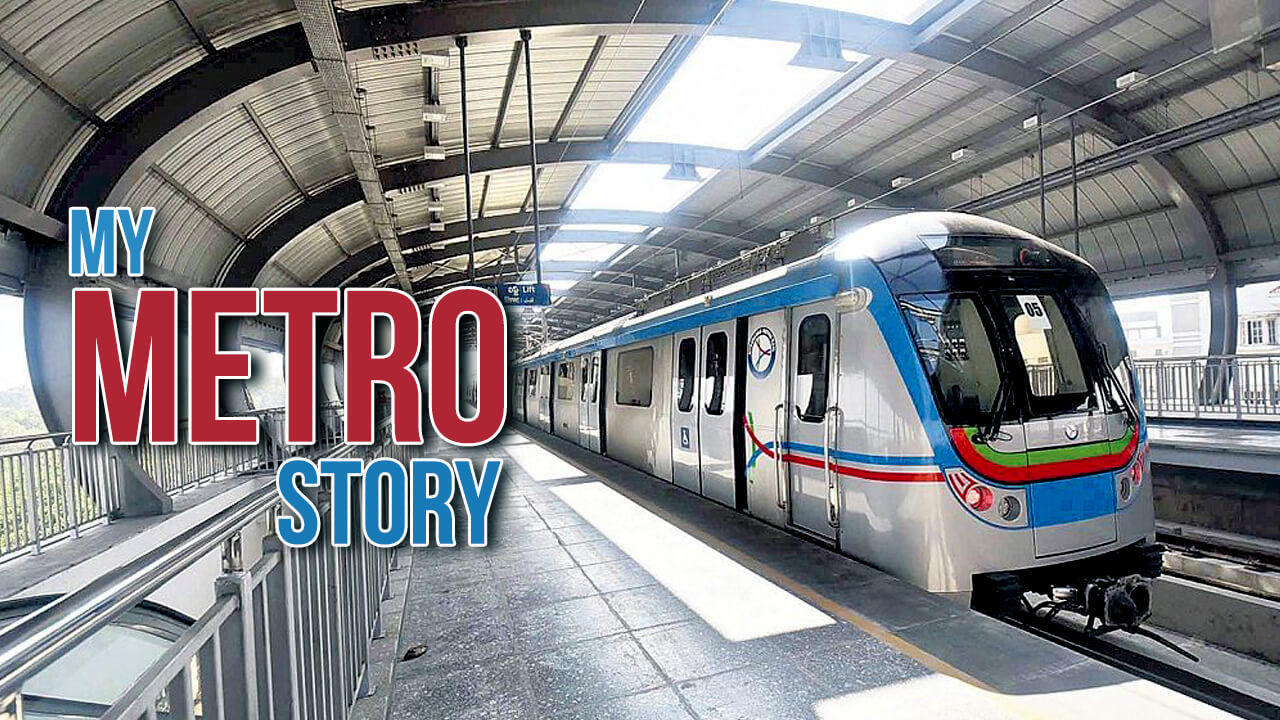 The Philosophy Of Train Journey

There is something very poetic and philosophical about trains. The platforms, landscapes while travelling, window seats, and everything makes a long train journey something to look forward to. While people who travel on roads worry about pollution, heavy traffic and boring view, train travel is a pleasure to look for something fun or just grab a favourite book or listen to soothing music! Indian Railways has had a long history and glory thanks to the intervention of British Raj, who brought a sense of poetic feel to the railway system.

But local trains in cities are something different in its own accord. Looked at as more of a commuting option, which is used by the public to travel to work or get back to home in an economical fashion, the poetic factor is cut off by nearly 70%. I mean, where is the time to look at a beautiful view (are there any beautiful green views in our cities? That’s a topic for another article!) when there is so much to worry about?

The train doesn’t arrive on time- you get late for the share auto- which goes late to the office- your manager freaks out due to the delay- and the chain continues!

Surprisingly, local trains have always maintained the glorified aura of travelling by train despite such tensions. I vividly remember travelling in a local train from Tada to Chennai in which a group of musicians (choir) started jamming and singing, which was so brilliant to hear- even while standing in the midst of a packed compartment! There was music associated with trains and our filmmakers have made railway stations and local trains a special backdrop for many chartbuster songs as well. Mani Ratnam made local train an important character in Alaipayuthey (Sakhi) which itself speaks about the tremendous influence local trains have on people.

Love For Local Trains And The Metro Effects

My love for local trains started way back in 2010 when I had to travel to work from Vidyanagar to Hitech city almost every day to the office. It was an era when MMTS was just gaining its glamour and was the main commuting point for all those employees who wished for a hassle-free travel. Despite the rush and packed public every day, the soothing breeze, the rhythm of train and brilliant maintenance made me fall instantly in love with it. While travelling the same distance in bus took over an hour (or even more in peak hours) to get to my destination, I could do it in just 30 minutes with MMTS.

And the bonus is – I could listen to my favourite songs and discover the nuances in them ( because of no unnecessary pushing or suffocation which is regular in buses). In fact, many creative ideas about writing, composing and life, in particular, came to me while I travelled in the MMTS. Most importantly, I met like-minded people who were interested in Cinema and used to write scripts while travelling to their destination! This doesn’t mean MMTS was void of limitations. The trains were delayed because of track changes and used to stop for longer time outside Secunderabad station so that the platform gets cleared- yet there was something highly poetic about it.

The so-called train journey experience was retained in ease and style by the Indian Railway Sector but now- a new commuting option in the name of Hyderabad Metro has come up!

Life In A Metro – The Moments Of Newness

Metro has become a trend and definitely a proud moment for Indians because of its state of art technology, innovation and promises to be a comfortable travel for elderly citizens and daily commuters. The advent of digital money and smart cards are aimed at effortless travel for the common citizens. After all, technology is mainly to reduce human effort and improve the overall experience of travelling for the ticket buyer.

But did this happen with Hyderabad Metro?

Like many Hyderabadis, I was eagerly waiting for the launch of Metro and used to brace myself for traffic limitations and dust in the overall city roads, thinking that it was all for the good and a better functioning of the city. The big day arrived with the launch of the Metro by Prime Minister Modi himself, who had a dreamy travel in the Metro, which was telecast live! When the Metro was open to the common public the next day, the stations swarmed with crowds who were eager to experience this futuristic travel and watching most of my Facebook timeline boasting about Metro, I decided to travel in the same.

After entering the nearest boarding station Tarnaka, the entire infrastructure looked quite appealing and stylish. The intricate work done by hundreds of workforce was clearly evident in every inch of the station. The ticketing lobby looked nothing like our regular railway ticket counters, which look almost like ancient museum spaces! But what good is technology if the workforce themselves are less enthusiastic to work or have a bit of confusion in their minds? My travel destination for the day was till JNTU and after taking the ticket, I had to patiently wait for the train to come.

Slowly, the number of boarding passengers increased and by the time the train arrived(in a matter of few minutes) the platform was packed with people. The train was already packed, with not even an inch of a gap and these platform members pushed every volunteer away and tried getting on the train!

The 20 Second Doors And A Breath Of Puffed Air

Due to lack of space or open doors like MMTS, the compartment couldn’t offer ample breather for the passengers inside. Even to get in is a challenge because of the automatic doors getting locked within 20 seconds of time. It was almost like a miracle to get inside in the midst of hundreds of people pushing their way in (even shunning out people with infants). The compartment might have been huge but thanks to our population and demand, even that looked quite smaller or even minuscule! To get a decent respiration going was quite difficult because of no open windows (one might say AC is a saving grace but with such packed population, air conditioner becomes more of a trouble than a pleasure).

The best view from Metro began from Secunderabad East station till Begumpet where I could get a top view of gymkhana grounds, parade grounds, Paradise – every local citizen’s favourite areas. The maintenance is definitely a class apart, with superior technology and effortless training given to the personnel. But the real cramming started after Begumpet station where the train crept into already narrow streets linking to Ameerpet.

Ameerpet’s station was packed with even more crowd, who were eager to get into the next train. Unfortunately, there was no signboard or a personnel who could guide the elder people that they should take another train to Miyapur. In fact, I was casually sitting inside the train while everybody else was getting down.

The real race began when I got off the train and literally ran to catch the next train, which would take me to my destination.  There was ample pushing, arguing, and even some fights between common public which I witnessed, but couldn’t pay attention to because of the rat race I was already in!

I was already gasping for a whiff of fresh air but was almost suffocating by the time I got on the train. There were infants, elderly public, families and even school children who were struggling to keep up with the pace of this travel. After few painful stops at a slow pace, I finally arrived at my destination and felt an air of relief- for getting off the “suffocating” experience I had!

So, where is the poetry? Where is the blissful experience of travelling on the train which was shown as advertisements in every compartment? Where is comfortable space to interact with likeminded new people? Is it too much to expect a natural aspect of Indian Railways in Metro?

I’d leave the answers to time and to my ever optimistic self, who will try to travel once again – in search of the ideal Metro Train feel!!