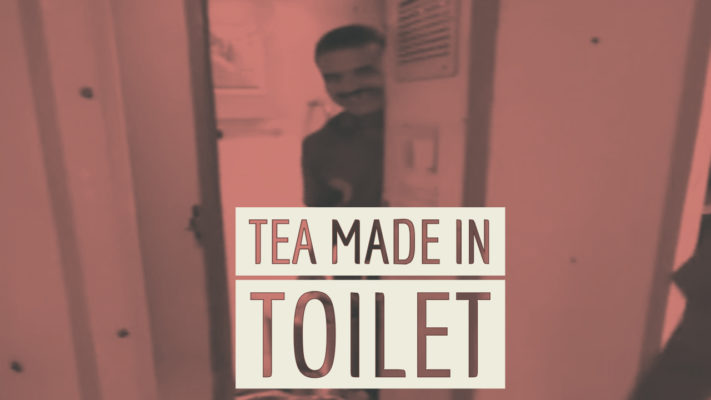 The Toilet And Tea Combination

Well, all that is about to change when you find out where is the water for the oh-so-delicious tea procured from?

In a video shot by a passenger on a train,  few vendors were seen filling tea and coffee cans from inside a train toilet. The incident took place in December 2017 in the Charminar Express, at Secunderabad(Telangana) station.

The video shows that the toilet door is seen closed from inside, after a while the vendors come out of the train toilet with the cans, suggesting that the water was mixed in the cans inside the toilet. A man in a blue shirt can be seen waiting outside the western toilets to collect the water-filled tea cans and to hand it over to the vendors.

The man who is waiting outside the toilet is also very cautious while filling the tea cans with toilet water so that no one can expose their act.

Enquiry Regarding The Situation

The vendors in question, who were unauthorised hawkers, were apparently engaged by platform catering stalls. One of the vendors, employed by contractor P. Sivaprasad, following an inquiry by Railways authorities, revealed that they were only transferring the leftover beverage in the toilet to sell it in their respective platform stalls. Claiming that there was no mixing of toilet water in the cans, he further said that they did so in the toilet to avoid public gaze.

A fine of Rs. 1 lakh has been imposed on the vending contractor by the Indian Railways and an inquiry regarding the same was held to identify the wrongdoers and initiate appropriate action.

Meanwhile, the Commercial Department of the South Central Railways termed it a ‘wrong practice’ while advising the IRCTC to levy a penalty against the Train Side Vending Licensee Sivaprasad. A statement given by them said, “However, the very fact that the Tea/Coffee cans were seen brought out of the toilet, is in itself a wrong practice. Therefore, IRCTC is advised to levy a penalty of Rs. 1, 00, 000/- against the Train Side Vending Licensee, Shri P. Sivaprasad, as this contract is now with IRCTC.”

Annoyed passengers and people lashed out at the authorities for not having mechanisms to strictly monitor such cheap tricks done by tea vendors in trains. The video was shared widely on social media with a tagline ‘Never Drink Tea, Coffee and Soups in Trains, Tea Sellers are Using Toilet Water’.

Related posts:
[VoxSpace Selects] Mrinalini Sarabhai : A Danseuse Who Dared To Venture Beyond Conventionalities
[VoxSpace Life] Elizabeth Holmes : The Inventor Of Theranos And An Architect Of A Noble Lie
Thalaivar Factor: What Does Demi God Rajnikanth Mean To The South Indian Political Scenario