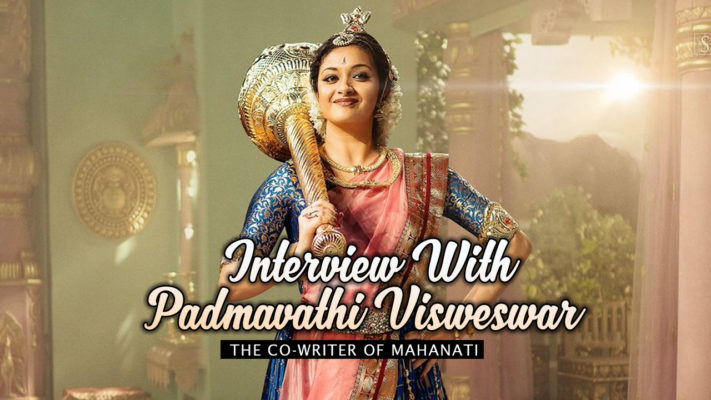 It is a known fact that Mahanati wouldn’t have been what it is without the amazing team behind it. And in this sour time where things are a bit crude against the women in the Telugu Film Industry, Mahanati came and spoke against the turbulence. We at VoxSpace managed to get talking with Padmavathi from the direction department, who played an instrumental role along with many others in shaping up Mahanati.

From where it all started, the research, to what a writer needs to keep himself/herself going, she has given some really valuable inputs. Without bantering any more here and there, let’s get talking to her right away.

Hello Padmavathi, you’ve been associated with script/screenwriting for quite a while now, with an interesting mix of projects mostly towards short film medium. Now would you guide us through your personal career to date, and what would you term as your defining moment as a screenwriter?

I am an MBA graduate by qualification and I ran a start-up for four years but then, my love for writing brought me into films. I started as a movie critic and eventually got a chance to be a part of story discussions for a few films of friends. Then I started as a screenwriter for Chandrasekhar Yeleti sir for Manamantha. I had the opportunity to learn a lot from him. Working with him has taught me many dimensions of writing. I used to be like an enthusiastic school student with him and never left an opportunity to discuss an idea with him and I picked his brain all day. I came up with interesting ideas and he taught me how to present them. He has been really kind and patient with me. He is my Screenwriting Guru.

I, then, started working with director Radha Krishna for a Prabhas’s film under UV creations banner. One of my friends, Rahul Talla, who worked for Yevade Subramanyam told me that Nag Ashwin was looking for a writer for his biopic on Savitri Garu. I was very excited since I grew up watching her films and I have been a huge fan of hers since childhood. I met Nagi and we thought we will first test the waters by writing a couple of scenes and take it forward if we were in sync with each other’s ideas. He gave me a few scenes to write. I came home and started researching about Savithri garu. I heard her Radio interviews, started reading about her on the internet for the next couple of days, I kept reading whatever I could find about her. A friend of mine had a book, which written on Savithri garu’s life by Pallavi. I borrowed it from him and read it as well.

Gradually I got a good hang of her journey and wrote a few scenes and sent it to Nagi after almost a week. He called me and told me that he wants me on the project and that’s how I became the first female recruit of Mahanati. After joining the team, I spent almost six months reading three books on Savithri and one book on Gemini Ganeshan and watching at least one or two of her films every day. I wanted to collect as much information as I could so that we can choose the best things to tell about her.

Coming to a random thought here, often times we see that screenwriters who get a good hold of short filmmaking fail to translate that talent to feature film writing?

Many Aspiring writers that I meet think that they have to write like someone else to be successful. Many of them try to write punches like Trivikram garu or emotional dialogues like Sai Madhav garu, which is stupid. They have to find their own style and process to be someone great not just copy someone’s style. When it comes to writing, you should be your worst critic. You should never settle for anything that you have written and you should constantly try to improvise.

From the time I was a child, I was always encouraged by my mother to read a lot of books. Reading is like food for the imagination. It is important to read books than to watch films. A writer should read more than he writes.

To look at the journey of a writer technically, we were curious to know your inspirations and learning experiences from different people in the industry, and how would you say that these factors play into your writing?

Everyone who has come into the films and made it there has comes with a lot of passion and love for films. There is always something to learn from everyone you meet here, whether it is good or bad. Things don’t happen here overnight. It is very important to be confident about ourselves and work really hard and hang in there no matter what happens. My husband is a lyricist, a music composer and he is my guide in whatever I do. He is an ocean of knowledge and I have learned a lot from him. Radha Krishna (Jil fame) is like a brother to me. He is the one who had introduced me to the industry and he is one of the most composed people that I have ever known. I always take his advice.

Teja sir taught me that it is important to enjoy the process of filmmaking, have fun and never bother about the result. And Suresh Babu sir, he sets very high standards for himself as well as others and thrives towards achieving them. My friend, Sindhu who is an aspiring director has taught me to be there for friends and work as a team to grow together. Venkatesh Maha, my friend and the director of Kancherapalem taught me that to make a great film you don’t need big resources, you just need conviction. There is, of course, lots to learn from everyone around us and it is a never-ending process because you keep meeting new people every day.

Coming to Mahanati, we see a tremendous amount of hard work being put in to recreate the 50’s and 60’s era of Telugu Film Industry. As one of the minds behind the scripting of the film, how did you specifically approach this project? Was there perhaps a particular set of things you needed to refer to, or was the film reimagined in spirit?

We had lots of information on Savithri garu and the main challenge was to present it in such a way that it doesn’t look documented. It is the impact of the information on the characters that create drama. We had to place all the information in such a way that it doesn’t disturb the emotional journey of the audience in the film. The biggest challenge was to imagine how Savithri garu might have felt at that instance and how she might have reacted to all these incidents in her life and to project that in the screenplay.

When we speak of Mahanati, of course as a layperson, it was anticipated as a dramatic story arch of one of Telugu’s greatest actresses, Savitri. In this respect, did you as a writer feel bound in your creativity to address some issues or was there a free leeway to explore the character as much as you’d have wished to?

Nagi always encouraged me to be honest in my writing and has never set any barriers to please anyone. It was about Savithri garu and it had to be told in the best way that we do complete justice to her story. Time (length of the movie) was a constraint and we knew we couldn’t tell everything. She had an extravagant life and it had to be celebrated. She had happiness, sadness, success, failure, love, dejection, everything to the fullest, which is very rare.

One thing that really moved me while writing about her was that through all the ups and downs in her life she has always been true to herself, always been kind and loving to everyone and her core never changed which makes her a very strong personality.

As Mahanati is now a success that you all dreamt of, would you like to introduce the team behind Mahanti, who made the world of Savitri come alive? Also, how far does your writing and script, influence the other art development aspects of the movie, and vice versa? Any anecdotes that you might want to share here?

Mahanati team is a very young team with lots of love for Savithri garu. We were always very excited about this project. Everyone has worked very hard and they have committed to it for one and a half years and it was completely worth it. Keerthy Suresh carried Savithri garu’s role beautifully and she won everyone’s hearts. She was the main medium for us to communicate with the audience and I think she did complete justice to the role. Dulquer has the irresistible charm which I always imagined in Gemini Ganeshan’s character and he did a brilliant job. More than everything I am happy to see that so many people are sharing so much information about Savithri garu and researching about her after watching the film. I think that is our real success.

Finally, having now made a mark as a screenwriter for feature films, if you had to drop in an advice here for the young writers who are just starting their career, what would that be? Any particular do’s and don’ts that they need to follow to make good of their careers?

Writing is more of a process than a qualification. You are a writer only when you are writing. Writing is a sweet torture. Sometimes you get a mental block that will make you want to kill yourself. You need a lot of patience and strong will to sit and start writing. At the same time, it gives you a liberation when you finish writing a great idea. For people who aspire to become screenwriters, I would like to tell one thing, writing is a huge responsibility, it is a privilege to enter into the audience’ hearts and influence their emotions. So, a writer has to respect it and always live up to it.