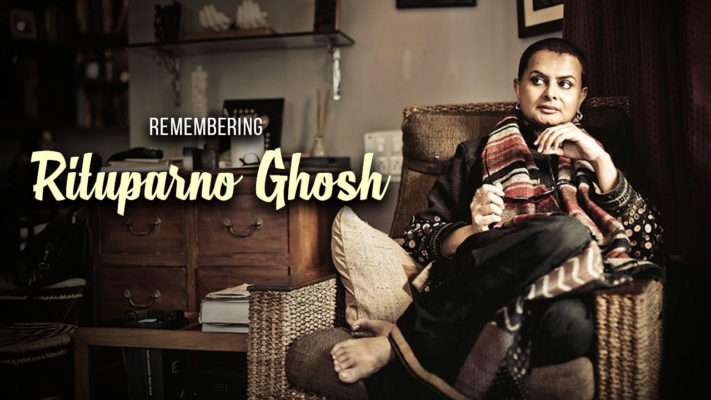 Rituparno Ghosh- Cinema And Storytelling And What He Left Behind

Rituparno Ghosh revived the art form from the very clutches of mediocrity in mainstream cinema, when growing up in Calcutta meant gazing at bizarre movie posters. The posters depicted hurriedly juxtaposed characters denoting age-old crisis revolving around joint family, love interests, two men with patriarchal mindset contesting for their love interest, cinemas that embarrassingly dealt with repetitive plots and stock characters. Slowly the films became restricted to only a section of Bengali audiences. The educated urban middle class came to despise the art, which limited itself to crude jokes, vulgarity, superfluous expressions, skin show, and blatant sexism that went on with commendable success within the main narrative of these films.

It was a dismal state of Bengali film industry which had seen better days, with Satyajit Ray, Ritwik Ghatak, Mrinal Sen, only to reach the nadir of decadence. The slow demise of Bengali cinema also meant rapid massacre of culture and art. The collective experience of these films was nothing unique or worthy of praise for its effects on society and cinema as a form of art. It was merely a crass visual satisfaction, quite an amusing mixture of gallantry and feminine fragility, and to a disturbing extent somewhat a moral jargon educating the mass on honesty, integrity of character, a woman’s incredible strength to preserve her honour no matter what it cost her, and the victory of pious heterosexual love over social coercion. Films failed to touch upon subjects like social paranoia, individual sufferings, social issues, and oppression of the marginalized. No wonder that Bengali cinema slowly associated itself with lack of inventive plot and sheer crudity.

Amidst this growing resentment towards mainstream cinema, that a section of urban middle class garnered towards the medium, films like Chokher Bali, Unishe April created a very different impact on the audiences who for long had forgotten the taste of elaborate set, costume, non-linear form of story-telling, unpretentious rendering of Bengali middle class, slow peeling of complexities of human mind . . .these films not just presented the audiences with literary adaptations and snippets of daily life, but new cinematic techniques, something which was missing from the industry for quite some time. In 2012, Ghosh gifted Chitrangada, a film which was to be etched in the mind for its subtle aesthetics, narration, homosexuality and identity dislocation as some of the main themes, unnerving majority of audiences, to whom homosexuality was still a topic to be hushed about. Chitrangada gave a voice to people who suffer from the ambivalence of their sexual desires, and a story to ponder by Bengali audiences who took homosexuality as a character flaw or laughing stock. Rituparno Ghosh had a delicate way of using myths and literature as a powerful weapon in his films, a device that elevated the characters beyond their immediate context.

Apart from being an actor and a songwriter, in the times when audiences had to refer to films by stalwarts like Mrinal Sen when talking about Bengali cinema, there were a number of things that differentiated Ghosh as a story-teller and director.  The most striking thing that any audience would notice sitting in a theatre, still soaked in poor cinematography and dance moves, is Ghosh’s handling of the camera. Ghosh’s films revolved around human emotions, his movies sought to peel off the façade from Bengali middle-class and their supposed etiquettes to portray life with its manifold complexities. Ghosh, in an interview given by him many years ago, states that “It was Ray who inspired me to become a filmmaker…,” yet Ghosh’s audacity when it comes to art and cinema is unparalleled by any of his predecessors or contemporaries. His Chokher Bali, inspired by a novel of the same name by Rabindranath Tagore does not restrict itself to being a mere portrayal of characters from the pages. Ghosh ventured into a realistic portrayal of Bali, the widow, her emotional turbulences, erotic cravings and the confinements of a patriarchal society whose perpetrators were not just men.

Ghosh’s films were not just stories to watch and enjoy and wash off after the two hours’ duration, like most of the Bengali films were during the period. His films were a raw portrayal of society, sometimes a child-parent dynamic verging on issues stretching beyond the confinements of daily dining room conversations. If cinema is truly a medium to spread consciousness amongst the mass, then Rituparno Ghosh is a pioneer, the man who took risks with the medium of cinema making. One of the best works of Ghosh is the multi-layered rendering of Chitrangada, the warrior princess, who, if read in a modern context, goes through gender identity crisis and wishes to be turned into a woman after she met with the love of her life, Arjuna. Ghosh articulates the context of gender imposition and storms the theatre with homo-erotic love, spilled psyche with domineering id, a woman trapped inside a man’s anatomy and the consequent gulf from society and roots. His films brought an altogether different flavor, with scenes breaking into songs of Sanskrit, Maithili and Bengali language, lights and darkness playing in a perfect dichotomy, taking the audiences through the dark labyrinths of the characters’ mind. In Shob Charitro Kalponik we witness new phenomena like subtle projections of a guilt-ridden conscience, dream within a dream, voices narrating poetry in backdrop punctuating with the characters’ sorrow and crises.

During his lifetime, Ghosh had received many prestigious awards, including the National Film Award for Best Feature Film and his films achieved international recognition during the later years of his career. Ghosh with his films waged a war against gender stereotypes, hetero-patriarchal society, society that imposes immense restrictions on desires and possibilities. Today five years after the death of Rituparno Ghosh, we remember him for creating a new space for the rejuvenation of Bengali cinema, showing audiences the possibilities of motion picture.