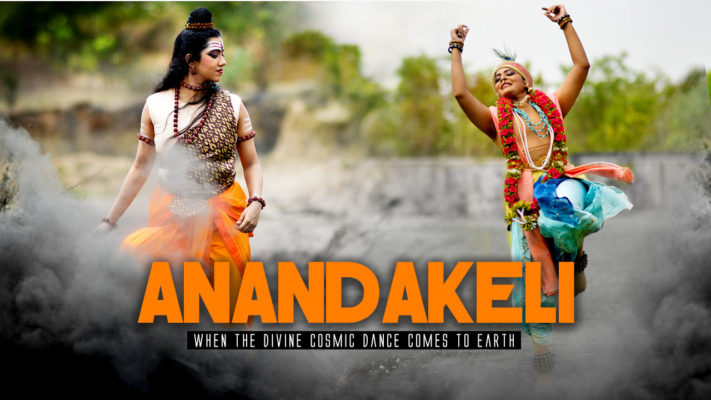 Indian Classical Dance has a rich history and is manifested in many forms which are versatile, graceful and also going deep into many walks of life. Classical Dance, especially in India, is not just a form of artistic expression- but also dwells in deeper spiritual meanings and takes the artist and the audience to a new dimension of thoughtlessness. Kuchipudi– one of the most prominent dance forms of South India is greatly known for its dramatic nature,  flawless grace and beautiful depiction of interesting stories.  Now, two young classical dancers namely Sharvari Priya and Srilekhya, disciples of Guru Dr Maddali Usha Gayatri, have come up with an interesting concept named Anandakeli which will be performed in Ravindra Bharati on 9th June. This particular dance ballet is based on a rare happening where Lord Shiva- the pioneer of classical dance happens to be impressed with the musical antics of Lord Krishna in Vrindavan.  This beautiful story is a mesmerizing depiction of two contrasting divine forms- while Lord Shiva is quite masculine in nature, with aggression and rage in terms of dance, Lord Krishna is mellowed, cheerful and happy with his own beautiful work of Brundavanam. Lord Shiva is usually known for- being a phenomenal musician and his extreme rage, it is interesting to see such an invincible divine form getting impressed with Lord Krishna’s playful approach towards the fine arts.

Coming to the storyline,  Lord Shiva is tremendously attracted to the soulful music in Vrindavan, played by the peaceful Lord Krishna while cherishing the moments with his gopikas. Lord Shiva instantly thinks that what’s so mesmerizing about Lord Krishna’s flute, which leads every gopika to a fantastic state of trance. Determined to see what Lord Krishna’s music is all about, Lord Shiva transforms into one of the gopikas and joins the blissful dance alongside Lord Krishna, all through the night.

Bringing Hari And Hara Together Via Dance Lord Shiva and Lord Krishna are two of the divine Trinity as per Hindu Mythology and it is indeed a rare occurrence to see these two supreme beings enjoy the dance form together. The unique idea was conceptualized by the two bright classical dancers Sharvari and Srilekhya, who got immense support from their guru. The young duo had to face many challenges in bringing this production to life because it involved novel thinking along with traditional values and mythological facts. The live music composed for the production didn’t have vocals in order to bring up the universal appeal of it.  The musicians also used Hindustani raagas like Bageeshwari and Vasant Bahar to give a beautiful edge to Lord Krishna’s Vrindavan.  A total of 16 ragas were used for this fantastic production.

The duo brings realistic effects to the dance performance by using exquisite lighting techniques and pastel colours for the costumes. Instead of the usual bright colours used in the costumes of classical dance, they chose linen as the main material for the attires of Lord Krishna and Lord Shiva. The intricate detailing and the newly styled zaris for the costumes show the dedication this production team took. The depiction of Krishna’s Raasaleela sequence was done using projection dancing, where he dances with eight projections of gopikas at different times of the day. These eight dance sequences were done based on eight different ragas, which are highly entertaining to watch. Some advanced concepts of Natya Sastra– the holy book of Classical Dance were used in this breathtaking production. Sharvari and Srilekhya used their best experience in performing the classical dance for nearly 15 years and came up with this experimental idea. Their sincere attempt at innovating Kuchipudi dance form is something quite commendable.  The world of Indian Classical Dance needs more such experimental approaches which bring an overall new dimension to it.  The enthusiastic duo is also willing to take up universal concepts like elements of nature and implementing in the classical dance down the lane.

Know more about the event here.

Related posts:
[VoxSpace Selects] Rick And Morty : Where Fart Jokes Meet High Art
VoxTalks With Mark K Robin: 'If There Were No Failures, How Will We Ever Look For Success?'
Anatomy Of Dwandwam : What Makes This Indie Feature The Best Telugu Film Of This Decade