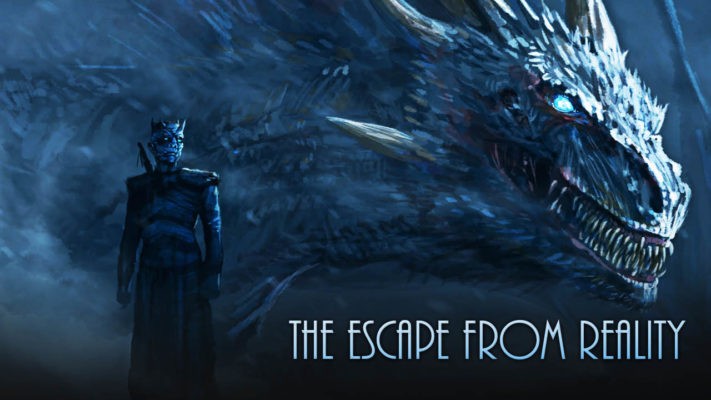 Have you ever wondered as to why stories of dragons, wizards, mermaids, vampires, flying brooms, magic wands and time travelling superheroes fascinate us so much? Do you often find your mind wandering into the magical world of Hogwarts, cheering Frodo on his quest to destroy the dark ring or fantasizing about petting dire wolves? The question here is what makes fantasy so insanely alluring?

Since the dawn of time man has been telling tales of magic and wonder. From our earliest myths told by Shakespeare t0 modern writers like Tolkien, including Dennis McKiernan and Kim Harrison, the reason why we love fantasy has always been the same. It lets us explore the world through a different lens, a perfect gateway to escape our real miserable lives and live in a world where dragons reign the sky, lights turn on with a flick of a wand, and where you own a private spaceship that can transport you anywhere in the blink of an eye.

As the great English fantasy author Terry Pratchett had once said: “Humans need fantasy to be human, to be the place where the falling angel meets the rising ape.”

When the real world gets a little too much to handle, fantasy creates a dreamland which is definably different from the one where grey clouds linger above our heads reminding us of our gloomy lives. Fantasy not only allows you to escape reality but it also brings you to some amazingly beautiful places like Middle Earth, Winterfell, Mount Olympus, Pern and the list is endless. After all, amidst this boring routine life who doesn’t want to ride horses that fly, tame dragons that spit fire or rule mythical cities?

We’re all familiar with the names C.S. Lewis and J.R.R. Tolkien who are also known as fathers of fantasy. Until the 1950’s, the world was under the spell of Lewis’ most popular fantasy work ‘The Chronicles of Narnia’, after which Tolkien’s ‘Lord of the Rings’ was published which created a greater impact on the readers with its self-contained mythology. But over time world has witnessed a great evolution of the fantasy genres and subgenres.

With the creation of dystopian fantasies like Harry Potter, Twilight, Divergent, Game of Thrones, Hunger Games etc set in an entirely envisioned world, we also see that unlike the fantasy works from Tolkien days like “The Hobbit”, “Lord of the Rings” which possessed a grand total of zero women, today we see a lot of women who are mainstays of the novels like Katniss in Hunger Games, Triss in Divergent, Hermoine in Harry Potter and many more.

Although it’s hard to predict the future, the rate with which the genre is progressing we can say that there are many more unbelievable changes that we can expect to see in the upcoming years.

From Fantasy Novels To Superhero Comics

From elementary school plays to high school cosplays, we have always had the drive to dress up like our favourite superhumans. But why are we so obsessed with our superheroes? Well, there have been heroes before the fictional comics and novels based superheroes but nobody’s quite like our Spiderman, Superman, Batman, Ironman etc with amazing superpowers and dynamic fighting skills or even Jon Snow for that case who makes us go head over heels in spite of ‘knowing nothing’.

What makes our superheroes ‘super’ isn’t merely because they save the world or rescue damsels in distress. It’s because they stand up for the good, defend truth, justice, fair play, law and order. In short, they are defenders of right against wrong. They fill us with a hope of a better tomorrow. We gravitate towards them because they inspire us to be better. Deep inside we all have a desire to be like our superheroes because apart from the fact that our superheroes are extremely good looking and charismatic, these superhumans teach us humanity.