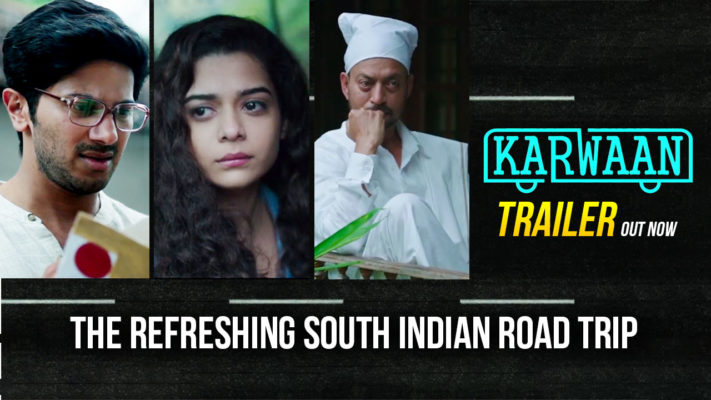 Karwaan, A Glimpse Of Life

It was the 1970’s small budget films such as ‘Golmaal’, ‘Jaane Bhi Do Yaaron’, ‘Chashme Baddur’ etc. gave a fresh lease of life to Bollywood. These low budget, offbeat films were also commercial films but were made with an ardent simplicity that turned out to be intrinsic to life in general.

Although such films faded out soon after, it seems after decades Bollywood gets a slice of that elusive simplicity in the trailer of an upcoming film- Karwaan. Directed by Akarsh Khurana and produced by Ronnie Screwvala, the trailer of the movie showcases the lead actors, Irrfan Khan, Dulquer Salmaan And Mithila Palkar, experiencing a topsy-turvy road trip – the road trip of a lifetime. Which interestingly, does not promise a change of fortune or fate whatsoever.

The beginning of the trailer shows the lead character Avinash (played by Dulquer) being informed of his father’s death, and due to some discrepancy, he has to travel all the way to Kochi to get the dead body. Along with this seemingly sad journey, he meets two compatriots – Shaukat (Irrfan) and Tanya (Mithila) – and the journey takes another complete turn. Is the film’s journey just limited to its literal meaning? Or, are we going to envisage the characters take a metaphorical journey through life?

The trailer makes everyone await the film, which is set to be released on August 3.

A Film Packed With Oddballs, Though Powerful Actors

To the followers of Bollywood, the film may just comprise of one brilliant actor, and that is Irrfan Khan. True enough, a powerpack in himself, Irrfan Khan, with his crazy one-liners, can indeed shoulder an entire film to success. But, what others may not know that the film marks the Hindi debut of Malayalam superstar Dulquer Salmaan, who has proven his mettle as an actor with films like ‘Ustaad Hotel’, ‘Neelakasham Pachakadal Chuvanna Bhoomi’, ‘Charlie’, ‘O Kaadal Kanmani’, ‘Bangalore Days’ and so on. The most promising thing about Salmaan is that he is not just about good looks – he is as much about good looks as he is about acting. It won’t essentially be wrong to portray him as the new age character actor. Now, it is to be seen how brightly he shines in the claustrophobic locale of Bollywood, where good looks and machismo score over acting skills.

Apart from Salmaan, the film also introduces another bright young actor – Mithila Patkar – who has also garnered great critical accolades as an actor of the stage and also of web series. She is yet another actor that Bollywood needs to watch out for.

With such powerful yet fresh actors on board, the film indeed seems to be a promising one. Shot in the grand locales of Kerala, the movie belongs to the slice-of-life genre, much like the Sujoy Ghosh-directed ‘Piku’. The film also features Kirti Kharbanda and Amala Akkineni in strong roles.