A Review Of “Ek Akeli Aurat” And “Hatak” (The Insult) 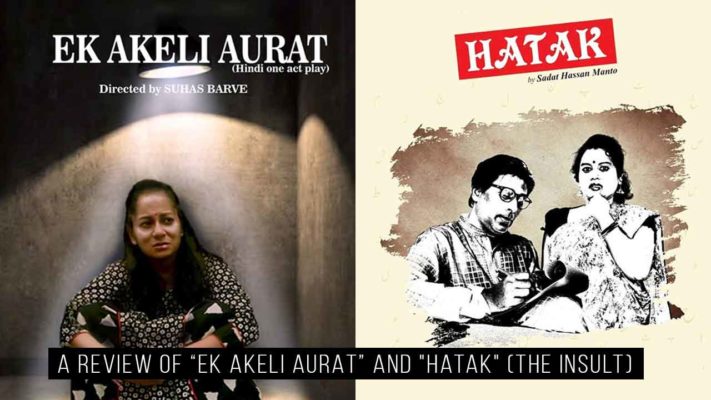 A woman is trapped, metaphorically and literally in her house. She surrounds herself with the trappings of a family life and possessions. She is encumbered by an injured brother-in-law and a young child. Her teenage daughter has flown the nest and her overbearing and suspicious husband has locked her in, to keep her and her young lover apart. Can she break free?

Poonam Chandana Golecha does a good job of portraying the character she was given. She was convincing as the distressed middle-aged housewife. She, however, should not have been asked to break character and mouth lines of the other characters.

These could very well have been recorded and played as audio cues. This and many other directorial flaws brought this play several notches down from what it could have been. The blocking consisted primarily of her pacing across the breadth of the stage. Neither the elaborate set nor the actor was properly utilized.

A kind-hearted sex worker, Sugandhi is cajoled by her long-term client  Madho -a constable from Pune- into giving up the trade. He makes many promises of making her a respectable woman as soon as he is able to sort out his financial woes. Life goes along ‘merrily’ for Sugandhi until one night, her pimp Ramlal takes her to a seth, who inspects her with his flashlight and quickly spurns her. How does Suagndhi deal with this insult? Does her life unravel? Does she find true love with Madho?

Director Ali Ahmed and the set designers made extensive use of the multi-level and multi-layered space at Lamakaan. Erecting tea stalls, lamp posts and recreating the cramped bylanes of Kamatipura or any other red light district of the Bombay of yore with finesse. Alas, this is all that was appealing about this performance.

The acerbic nature of Manto’s writing was diluted by insipid performances that were at once under-prepared and mechanical. The opening sequence where we see the writer Manto in the flesh but not in spirit set the wrong tone at the outset. The lifelessly delivered lines in chaste Urdu added nothing to the play and could have entirely been avoided. How the Director allowed his actors to fumble their way through lines, repeating them often and the worst of all delivering most of them with their backs to the audience is beyond me.

The text was rich, the performance lacklustre. What could have been a good a production, was let down by poor acting, terrible light and sound design. Ali Ahmed should have more faith in his abilities and demand a lot more of his actors.