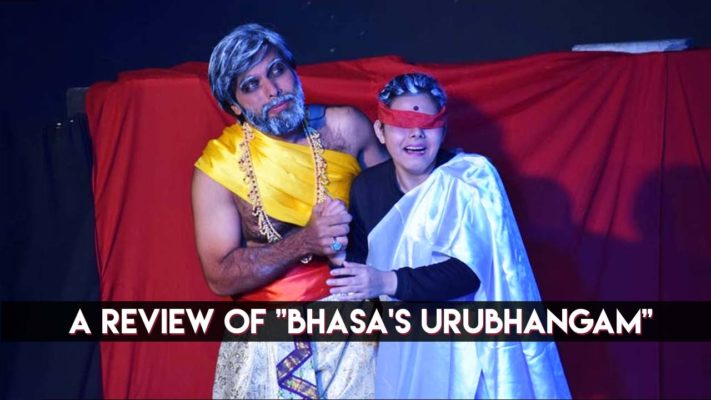 Duryodhana is only ever portrayed as the villain of the mega epic Mahabharata. A man whose pride and obstinacy got the better of him. Though the tale of ‘the triumph of good over evil’ is much more layered than what we know, Duryodhana is not much more than a detestable king in our collective imagination.

Urubhangam, which literally translates to the ‘broken thigh’, explores his human side, his flaws, his fears etc. The play in no way absolves him of his deeds, rather it deals with his emotions during and around his death. Does he experience any remorse? Does he still feel bitter towards his cousins? Does he blame them for his failures?

Urubhangam was staged as the finale, on the third day of Nishumbita’s annual theatre fest, Natostav. The play was a showcase of physical theatre, replete with elaborate choreography of the battle scenes and the inevitable death on it. Urubhangam had the makings of a highly visually engrossing play, with carefully crafted movements. However, the insipid acting and overused repeated grunts took the sheen away.

Akhil Bhaneswar looked the part as Dhritarashtra, Duryodana’s father. His steady performance added some much-needed grace, while the rest of the cast floundered.

One can’t help but imagine how magical the play might have been if the entire cast had pulled their weight while playing their parts.