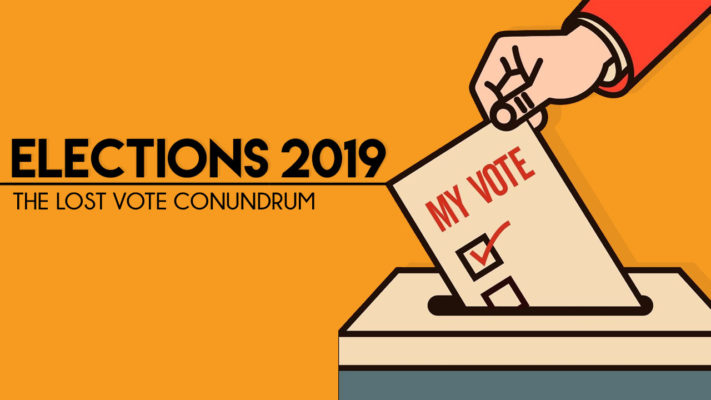 Around 86% of India’s working population are employed in the unrecognized sectors, working at minimum wages. As many as three out of every ten workers are employed at a different city working in an inhuman work environment. In Jaipur and Chittorgarh, approximately 2000 Kashmiri students reside whereas, in Dehradun, it must be around 1000. What ties these two apparently distinct groups like an umbilical cord is the event of a lost vote.

In India, the common mass needs to cast their ballots at the assigned polling station, in-person. At present only the NRIs, members of the Armed forces, diplomats, and senior government ministers can cast their votes through proxy voting. The dichotomy between the two sections tosses a number of pertinent questions. Does the allegiance of India’s migrant workers to their country hold no meaning? Why the persistent issue of vote loss has not been taken up earnestly for so long?

Proxy Voting: All about the Lok Sabha bill on NRI voting rights

As per Times Of India (TOI), around 280 million eligible Indian voters could not cast their vote in 2014 for their respective constituencies. In what is believed to be the largest democracy, India, the voter ID cards issued by the Election Commission of India merely serve as identity proofs. Very recently, TOI started a campaign called Lost Votes (www.lostvotes.com). It recounts personal narratives of employees, students and labourers who have to skip voting for different issues.

Lost Votes – An Initiative of The Times of India

It is extremely easy to accuse newspapers of promoting yellow journalism prior to elections. However, the latest TOI campaign brought a whiff of fresh air. For young voters, it must be bemusing to know that the election process is huddled with inefficiencies, catapulting millions of vote loss out of it.

What Has Meddled Up The Process?

The problem of lost votes is not merely an issue for students or the community of migrant rural workers. The middle class, semi-urban employees also find voting from their constituencies a daunting task. Journeying from one state to another, coupled with financial burdens has crippled many Indians from exercising their right to vote. The Wire pointed out that, during the 2014 election, in the urban areas, the turnout reached its nadir when compared to the previous five general elections.

However, even if we assume that the semi-urban employees retain the means of travelling miles to vote, students and wage labourers cannot. Students who rely on scholarship money or a tight budget, to accommodate their costs, might find the idea of spending thousands to vote utterly unsound. It is particularly an issue in politically charged up regions like Kashmir, Mizoram, and Assam that travelling during elections tends to get problematic.

Lost India votes with Faye D'Souza | Is it the government's duty to make voting easy?

Back in October 2018, during local body polls, Kashmir witnessed a bare 3% turn out at the polling booths. It is an unfortunate experience for the younger generation who are deprived of pitching in their political opinion in a region that has affected their lives the most, and ever so intricately. Similarly, a labourer will lose a day’s wage, or perhaps in this case, several days, a bite off more than they can chew!

For decades now, this situation has remained the actuality of many Indians, to whom voting literally remains a hard-earned luxury. Given the rural democracy that India has, TOI’s recent campaign has brought light to the data that only takes into consideration metropolitan Indians. A chunk of India’s population is tactfully kept out of it, in the margins.

Migrant workers and students remain spectators of the election- savouring the flavour of it from the television screen, WhatsApp forwarded messages, social media banters, newspaper clippings, and banners. For workers who belong from perennially marginalized sections, keeping away from the election is a compulsion. In the end, although they continue to depend on the state for their daily livelihood, they end up as a passive witness to its political framework and shifting power dynamics.

What The Election Campaigns Have Overlooked?

The problem is not the general lack of awareness regarding voting rights in the country, there has been no dearth of campaigns and advertisements. In 2009, Aamir Khan was the face of a voter awareness campaign, funded by the Election Commission of India, relentlessly harped on choosing the right neta for future generations. From Ab Badlega India Ad to Blind Man Voting ad by NAB India- there is not a single campaign that has focused on the voters’ troubles.

Although each of these ads stands on the veracity of democratic principles, it completely overlooks the problems that systematically branch out a rigid electoral process. Considering the problems of mobility, any blind preaching of commitment to the polling booth is unrealistic. At the end of the day, for those candidates who represent the distressed unorganized sector, it is more about chasing the election; the popular belief that vote is a privilege rings hollow to them.

As Manish Tiwari has recently pointed out to TOI, “it does not require rocket science to find a solution to this. . .”  He has his faith fixated on the online biometric verification process. Thanks to the campaign that readers are getting to the bottom of voter’s apathy and low turnouts in polling booths. Voter’s apathy is not always diabolical, but as is apparent from the above discussion, natural aftermath, an evil that needs to be nipped in the bud.