A Review of “Skepticism” By The Unknown Pen And Nritya Forum 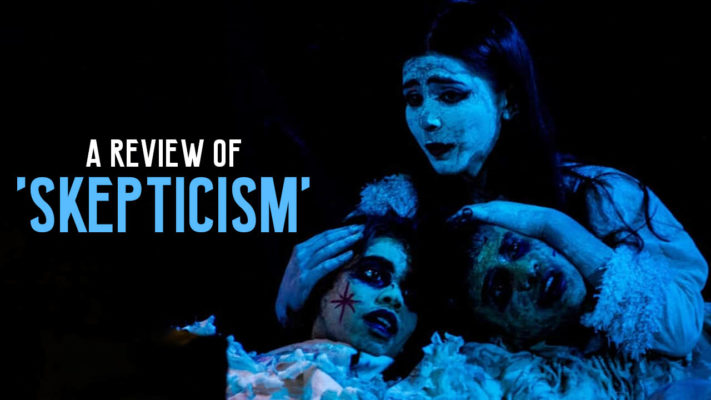 “Skepticism” By The Unknown Pen

An artist must often confront conflicting emotions. His or her identity is reflected through their work. Which emotion comes to the fore is the choice one has to make. If the artist is disturbed, the conflict is exacerbated.

Billed as a psychological and philosophical drama, flirting with absurdism, surrealism and scepticism, the play, Skepticism, is an honest effort that unfortunately doesn’t amount to much. Amaan Ahmad’s debut effort suffers from self-indulgent writing. With insipid dialogue that is repetitive, the playwright wasn’t able to hold my attention for the entirety of the play. His direction fared marginally better than his writing. Clearly, ‘production design’ is his strong suit, as the play failed to impress and falls flat in the performances.

His actors took on the onerous task of personifying emotions, a big ask even for seasoned actors. But, the debutants stuck to their task and unfortunately couldn’t add life or emotions to the play. Chaos (played Kedar) was orderly, Happiness (played by Arti) was dazed, Reality (played by Matthew) was plastic.

Special credit to the director must go for choosing to depict insanity through two actors, played by Ayaz and Vinaya. Credit as well to the actors for being in sync always. Insanity brought some much-needed energy onto the stage. Niteesh Pandey held the fort throughout the play as the troubled artist, wholly convincing in translating his inner turmoil.

The play’s end has an interesting question for the audience though. Does imagination lead reality or is reality imagination’s chaperone?