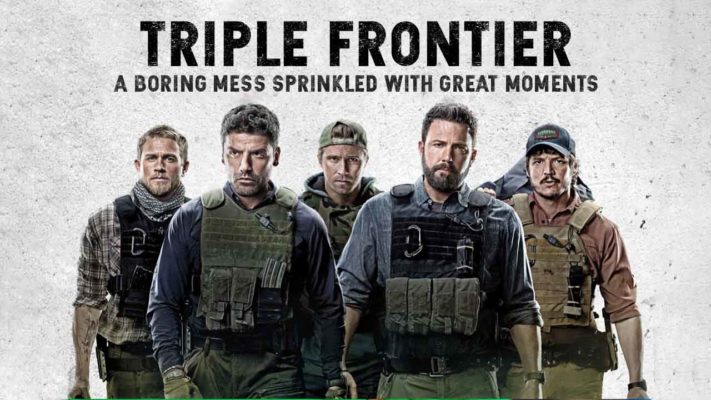 Triple Frontier- An Exciting Team Of Writer And Director

In recent times, there is no director that has been experimenting with tone and genre as much as J.C Chandor. He started off his career with one of the best corporate thrillers ever, Margin Call. He followed it up with a survival film (All Is Lost) and an action drama (A Most Violent Year). Both of which set him up as one of the most assured and mature talents to come out of Hollywood. So, when he was collaborating with a brilliant writer like Mark Boal, of The Hurt Locker and Zero Dark Thirty fame, to make an action heist film called Triple Frontier, I could not wait for it to come out.

Pope (Oscar Isaac), an Ex-special forces member, is now working for a private military outfit in Brazil combating drug crime. In one of the raids, he comes across information that suggests that a very dangerous drug lord, Lorea, is hiding in a safe house with a stash of 75 million dollars and more in a tropical jungle. Pope decides to put together a team of ex-military members for a job to seize the money and kill Lorea. The only catch is, this needs to be done extra-judicially for them to get away scot-free and split the money equally. The deal seems to be pretty great, the only flaw in the plan is that it seems too good to be true. Do they pull it off? And how do they get away forms the rest of the story?

Let’s talk about what works. Triple Frontier has a stellar cast consisting of Oscar Isaac, Ben Affleck, Charlie Hunnam, Garrett Hedlund and Pedro Pascal. Each of these people delivers amazing and believable performances. The action sequences are staged and shot with such class that you are mesmerized by the skill on display. Especially the first shootout and the main heist stand out as some of the tensest sequences I have witnessed in recent times.

The production design and cinematography bring every location to come to life with vivid detail. It seems like a lot of work was put into it to make it feel very well realized. Finally, the icing on the cake is the brilliant score by Disasterpeace. He has been consistently putting out great work with his indie collaborations like It Follows and Under the Silver Lake. It’s great to see him working on such a huge project.

Boring Characters And Long Stretches Of Nothing

Now let’s talk about what doesn’t work. The biggest problem with the Triple Frontier is the pacing of the film. While there are great action sequences throughout the film, the connective pieces between them don’t work. They seem way too generic and expository.  While everyone in the cast is doing their best to give great performances, the characters are way too thin for them to do anything exciting with them.

The dialogue is very nuanced and interesting, the problem comes from how predictable each character’s fate is. When a divorced dad needs to reconcile with his estranged daughter and he goes on “one last job”, we know exactly how it’s going to play out, thus removing any tension that we would otherwise feel.

Another big problem with Triple Frontier is that the events seem way too far fetched at some points and way too convenient in certain moments. This creates a kind of cognitive dissonance that does not really allow you to get involved in the story. Coming from the calibre of writers like Mark Boal and J.C. Chandor, you expect a lot more out of it. As a director, J.C Chandor has been brilliant at unfolding a story at its own pace, without really boring the audience.

For example, in a movie like A Most Violent Year, not a lot happens over the course of the movie. But what keeps it captivating is the characters and their behaviour. Here the problem seems to be that he is so lost in the elaborate plot that he has forgotten to given enough space for each character to be fully fleshed out.

On the whole, the film works great. I would even call it brilliant at certain moments. The problem is that it is way too inconsistent. So I would suggest you watch the film if you are a fan of the talent involved, but keep the remote in hand for the boring stretches in between.