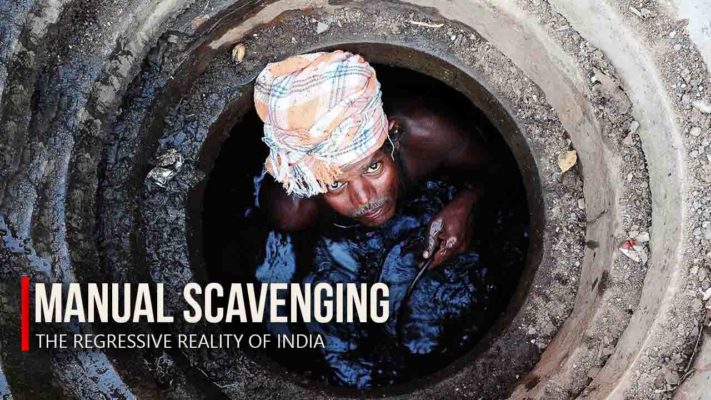 A Topic Which Has Stopped Fearing Apathy

Manish died of asphyxiation while cleaning a septic tank, his body has been taken to the hospital for further procedures. What will his family do? Contact the government for help, which would pay them some amount of compensation or wait for another person to help them out? Who is responsible for his death? The sewage tank which was full of human excreta? human? or the government?

But to look upon the data and the new survey conducted by the Union Ministry of Social Justice and Empowerment across 10 states, over 20,500 manual scavengers still exist in India and to our knowledge and shock, it is just the counted data. Meanwhile, the irony is, 3 out of 10 manual scavengers die almost every week, which is a topic that has been untrodden since India found out of its existence.

Does The Act Have Loopholes?

The employment of manual scavengers and construction of dry latrines prohibition act (1993) talks about banning the employment of manual scavengers, which was later amended in 2013. However, the Act has certain loopholes. It bans ‘hazardous cleaning’ of septic tanks and sewer pits, but only if the workers are not provided ‘protective gear’ and ‘other cleaning devices’. Furthermore, the government or act doesn’t explain as to what the ‘protective gear’ is, it was just on papers.

The focus of the act has been on demolishing the insanitary latrines, open drains and pits. But instead, it should look into the problem of manual scavenging as well. The practice continues, especially on railway tracks and platforms across India, as well as places that are prone to open defecation.

Was Swachh Bharat Mission A Failure?

Swachh Bharat is Modi’s brainchild. Under this programme, around 50 lakh individual household toilets have been constructed. Among a large number of toilets are built, more toilets remain with the single pit construction which becomes full after being used for a year. And the irony that comes with it is, these toilets remain in the pursuit of getting cleaned manually. And those cleanings take place only with the help of these manual sewage labours, commonly known as scavengers.

Does The Age-Old Caste System Take Over?

While the Safai Karamchari Andolan had filed the public litigation on banning the employment of manual scavengers which is also in a term called as cheap labours, few of their activists claimed that the root lies back when the Indian caste system was on high practice as the Jamidars could easily manage to get their sewage cleaned by lower caste people.  The most manual scavengers came from the Scheduled Caste doubled the social boycott of workers who were unable to find any work other than manual scavenging or sewage cleaning. So, there is a direct nexus seen between these manual scavengers and caste system where still, to an extent, Indians believe the work to be done by lower caste people. If looked upon the villages where the mentality hasn’t taken a new shape and it still continues to walk on the same path of the caste system, then the root cause for creating the profession should be addressed and this can be done by introducing laws to the villagers by Indian administration.

Basically, these manual scavengers can be classified or labelled under different types of work. Though they do the same cleaning while risking their lives, the nature of work differs a little.

It is the process of cleaning and emptying/drying the single pit latrines which require daily work. Around 90 percentage of these cleaners are present in rural areas.

It relates to sewage cleaning which takes place during water logging in the rainy season.

It requires workers to maintain and operate sewage and faecal sludge treatment plants on a daily basis.

Everyone is given the choice and right to live their life with equality and manual scavenging is termed as the worst work by prohibiting it either on papers or off papers, but the practice like every other, social issue, still continues to haunt the society.