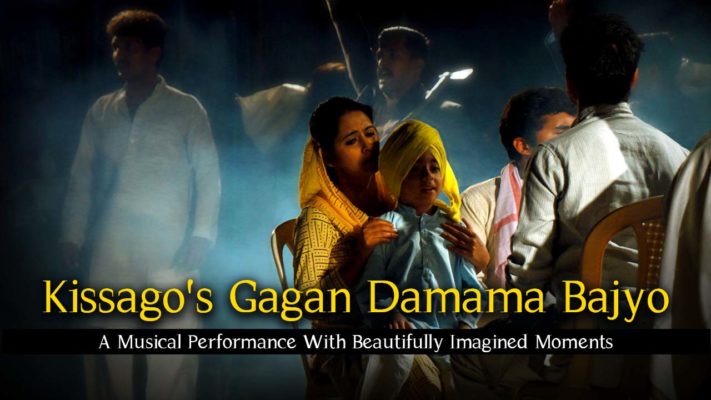 A series of conversations with ageing freedom fighters, who look back at the tumultuous times between the two great wars. These conversations are set in 1965 and 1994 look back on the 8 years that saw Sardar Bhagat Singh, transform from being an idealistic college student into a revolutionary icon.

Piyush Mishra‘s acerbic and witty account of the life of a man who has inspired countless generations also laments the state of affairs in modern day India. Was the white man’s oppression merely replaced by brown overlords? Is this the India that Bhagat Singh and his ilk laid down their lives for?

Kissago’s musical performance had some truly magical moments. Jay Jha‘s inspired use of choreography to create the interior of a train compartment and the walls of Phoenix Arena for the exterior to recreate the train heist at Kakori was one of them. Unfortunately, such moments were too far and few between in a performance that ebbed and flowed. The Jallianwala massacre was well choreographed but the team couldn’t pull off the desired lighting to lift this sequence. Bhagat Singh, Sukhdev, Rajguru and a few others managed to hold our attention but only just. They had powerful and impactful lines and the fast-paced action to help them in their cause. Paritosh as Bhagat Singh seemed like he was holding something back and that the Bhagat Singh he envisioned wasn’t on stage.

Jay must also be commended for managing such a huge cast and crew. Some of the casting choices were purely made for their likeness to the real-life characters, however, this is a double-edged sword. The intensity dropped quite often owing to the wooden performances of some of the supporting cast, especially in the second half. Thankfully the music managed to keep the audience engaged.

Do we get to see a better performance ably supported by a well oiled technical crew? One certainly hopes so!