[VoxSpace Review] Jordan Peele’s ‘Us’: An Insight Into The America We Often Turn A Blind Eye To 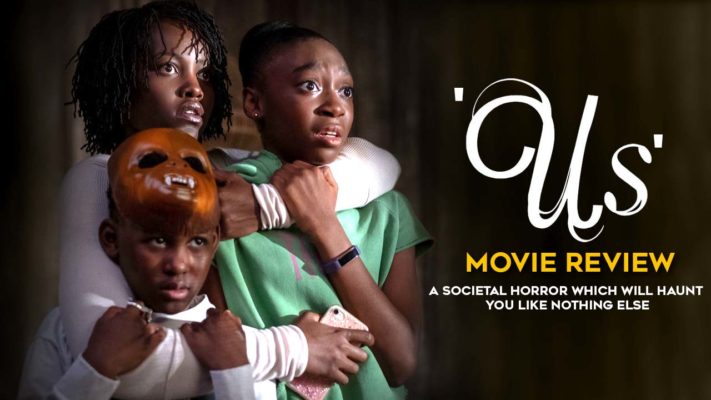 Starting from when Jordan Peele had decided to name his recent film as ‘Us’, he had ingrained into the heart of it a play of words, of doubles, of deceit. Evident from the title, ‘Us’, the film addresses the forever awkward elephant in the room –the audience. It becomes clear right from the start that it is going to be a film where the audience plays a massive role however detached they might have preferred to be. The audience is an essential part of the film’s story and no one can deny that. Given that, the film has a plot involving doppelgangers and doubles, it absolutely makes sense that Peele would shape his film up in the form of an allegory.

Jordon Peele is known for diligently experimenting with the genres of science fiction and horror, often merging the two in one, and hence, in no way could he have missed the chance of self-consciously referencing his film (following his highly popular ‘Get Out’) to the 1954 science fiction film, ‘Them!’ Although the title of Jordon Peele’s ‘Us’ most evidently points at the collaborative participation of “us” –the filmmakers and the audience –providing an additional purpose to it brings specificity into it in the sense that the title also refers to the US or, as we know it, the United States of America. Such an assumption can be backed up by the fact that quite a while into the film once it has picked up momentum, one of the characters remarks, “We are Americans.” Summing up, ‘Us’ is a movie about America.

‘Us’ Bridges the Social Fable with the Allegorical Apocalypse

Stuffed with ubiquitous symbolism and a creeping sense of apocalyptic dread, Peele’s ‘Us’ demonstrates ambition as a social fable presenting a society that deliberately develops amnesia and proceeds on to bring about its own destruction. Quite in the fashion of the previous year’s highly appreciated film, ‘Hereditary’, ‘Us’ represents horror styled as a family drama. However, ‘Us’ has a different intended target. Unlike ‘Hereditary’, Peele’s film targets America as a nation, an America that wants to have nothing to do with the bitter parts of its history.

Fair warning, ‘Us’ is not one of those conventionally concocted films to have a clear and coherent set of events and mythology. So, if you are one of them who likes his film carefully stitched together and gets a kick out of occasionally picking plots apart, then ‘Us’ is not for you and would probably end up frustrating you. ‘Us’ lacks an articulate explanation, something that could connect it directly to the real external world.

However, it does have the potential to never bore one, offering new angles every time one would plan to re-watch it. In fact, whatever the audience takes in from Peele’s film says more about themselves than it does about the film. Nevertheless, make no mistake, ‘Us’ is both unsettling and entertaining. It is more instinctive than illustrative, more primaeval than graphic. In its own unique way, ‘Us’ presents a horror that would stay with you even when it is over.

The Story –How a Family Vacation Turns into a Nightmare

In many cultures, even today, having twins or finding one’s exact lookalike is considered unlucky and even deadly. Hence, in an ominous beginning, we find a young Adelaide (Madison Curry) visiting the Santa Cruz beach amusement park in 1986. She enters a funhouse where she comes across, in a hall full of mirrors, what first appears to be her own reflection but finally turns out to be her exact human copy.

Leaping on forward to the present day, the film shows adult and married Adelaide (Lupita Nyong’o) on a vacation at her Santa Cruz beach house with her two children, Jason (Evan Alex) and Zora (Shahadi Wright Joseph), and Gabe (Winston Duke), her husband. The family agrees to meet their friends Kitty (Elisabeth Moss) and Josh (Tim Heidecker) at the beach and once that is over they return back home to finally allow themselves some rest. And from here things start spiralling down as they witness four human figures standing, holding hands and motionless on their driveway. Soon after, Adelaide and her family realize that these four figures are not a bunch of odd strangers, but their own doppelgangers –angry, twisted and determined for blood.

‘Us’ Is Here To Scare You and More

‘Us’ forms a spine chilling foundation that expands with promise challenging the audience every time they think that they can finally make sense of the film’s events. Peele introduces familiar horror tropes into the plot taking ideas from monster movies, home invasion movies, social thriller as well as supernatural thrillers.

However, despite employing the usual tropes, he does something more. Instead of just stopping at the horror element, Peele delivers a social observation out of his film that states that the biggest and the scariest enemies that we have for ourselves are our own shadows –our darker sides that we prefer to keep away buried in secret.

Apart from this, on the broader prospect, Peele extends this observation to an idea with both social and cultural insinuations on how our darker selves have constructed us and our ways of action, thought and talking. Peele also attempts at commenting on the way America deals with class and race. Adelaide and her family are hunted for death by their doppelgangers because of events that are from way back which none of them, get going in the first place.

It is America’s attempts at forgetting a bitter history that has escorted the nation to fall into an apocalypse. Peele has a deft sense of direction and he employs that to his advantage at covering up any probable clumsiness. ‘Us’ keeps its audience at the edge of their seat. It maintains the possibility that no one is safe and that tables can turn at any point, or not. Anything is possible.

All the actors carry out an excellent job in playing both themselves and their scary doubles. What is most impressive is that swift shifts from deranged to wounded to frightened is played out equally well by the actors and precisely that is where the film derives its streak of horror from. Although everyone does an equally decent job as actors, it is Nyong’o who steals the show. Her performance as the focal moral centre of the film’s narrative is both heartbreaking and uncanny, almost like she is switching in between souls throughout the film.

An Apocalypse that Begins in a Dark Past

Detail is the last word when it comes to Jordan Peele’s ‘Us’. Back in 1986 when a young Adelaide goes exploring into the funhouse, it is named “Shaman Vision Quest” with a graphic figure of a Native American wrapped around the name. However, years later when Adelaide visits the beach with her family the name is changed into “Merlin’s Enchanted Forest” with not even an ounce of its bigoted past remaining. Furthermore, as the film moves on, there is a persistent allusion to the 1986 “Hand Across America” anti-poverty campaign that was known to have raised about 34 million dollars for the poor where only less than its half, about 15 million dollars had actually reached the poor. Yet at another moment, in the early part of the film, a shot fixes on stacks of cages carrying rabbits. This scene exemplifies Peele’s brilliance when one sees a few black and brown rabbits punctuated in between a huge majority of white rabbits.

The verse of Jeremiah 11:11 states, “Therefore, thus says the Lord, Behold, I am bringing disaster upon them that they cannot escape. Though they cry to me, I will not listen to them.” Thus, in a significant manner, Peele provides a contextual perspective, a perspective on how America has an image to maintain at the cost of a bloody history of oppression. Perhaps what Peele, constantly attempts at is to remind his audience that if the day of reckoning is to come it would come because of “us” and not because of any outside invasion of the “other”. In a smart move, Peele also uses the motif of the double in the reference to ‘11:11’. 11:11 is itself a play on the concept of “a double of the doubles.” In order to confirm that his audience is not oblivious to this reference, Peele uses it again in a scene involving a screen of an alarm clock right before things go haywire in the film. Besides, the motif of the double is made surplus through the obvious doppelgangers, mirror images, twins, as well as window reflections.

Jordan Peele’s main motive behind his film, ‘Us’ is to strike a chord with his audience, again and again, to acknowledge the misdeeds of the past and rectify them instead of just shutting them out at the back of the mind. He wants his audience to see themselves as a whole and not divide themselves into polar entities bringing about their own destruction. Peele’s ‘Us’ urges the fact that the seed to destruction is embedded in our souls. The poison lies with “us”.