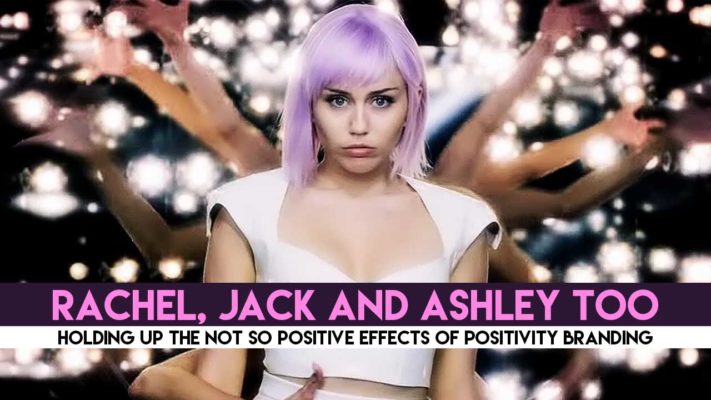 The Dystopian Notion Of Celebrity Branding And Worship

The fifth season of Netflix’s Black Mirror stars Miley Cyrus for its third episode, ‘Rachel, Jack and Ashley Too’. It is ironical because much like the central character of the episode, Miley’s journey had been quite similar in terms of her rediscovering herself and going up the ladder of success. She is well aware of the role that a celebrity plays in terms of branding and packaging and is very clear about her calling her own shots. Although ‘Rachel, Jack and Ashley Too’ hovers around the basic and familiar themes of Black Mirror in general –artificial intelligence, memory storage, brain enhancement, drugs –it raises two important questions primarily: How do celebrities project themselves to their fans and what do the fans really receive as a result of celebrity worshipping?

The Black Mirror episode clearly hints at a dystopian future, led to thereby various factors including the ways celebrities are perceived in the present. The episode focuses on the pop culture trend of spreading positivity as an imperative by celebrities through social media. Although that is not something to be complained about intensively, it must be understood that the dramatic positivity could be defiantly dehumanizing if taken on to the extreme. In fact, such extreme dehumanization could be ruinous for the mental health of the people, especially the vulnerable ones.

Rachel, Jack And Ashley Too: The Narrative Of Positivity

Black Mirror’s third episode kicks off in a teen movie style as we find Rachel (Angourie Rice) sitting at her high school cafeteria table alone, drowning herself into watching Ashley O’s (Miley Cyrus) pop music video. She is lost in the world of music that very poorly represents empowerment –“Hey-a ho, I’m on a roll/ Ridin’ so high, Achievin’ my goals.” The contrast between the expressions of Rachel as she is walking down alone in the hallway of her school and the peppy moves and song of Ashley O is almost ironical since Rachel is doing anything but riding high towards achieving her goals. On the other hand, Rachel’s sister, Jack (Madison Davenport) disapproves of the music of Ashley O and prefers hard punk metal bands like the Sonic Youth, Pixies and the Idles and Savages –the bands that their late mother liked. Moreover, Jack is concerned about the obsession of Rachel regarding Ashley O, somewhat because she is worried about how all the positive talk would affect Rachel.

The narrative is laid along two story tracks –Rachel’s and Ashley O’s. Right from childhood, Ashley was raised by her aunt Catherine (Susan Pourfar) who is also her manager. As a manager, Catherine works out ways to sell Ashley and her music skills and one of her latest ideas is to market a doll named, “Ashley Too.” Ashley Too is not like any other ordinary dol. She is like the OS, Samantha, voiced over by Scarlet Johansson from the film, ‘Her’ (2013). Ashley Too enquires her owner, processes and learns the answers, and molds her responses in a manner that freakishly resembles humans. In fact, to be a little more detailed, according to Ashley O and her marketing team, the doll bears the identical personality of her –inexorably cheerful and optimistic. However, that is just one side of the story. While in the daytime Ashley attends talk shows promoting her doll, empowerment, and positivity, it is a different picture when she is at home where she lives with a troubled mind.

She is depressed, exhausted and unable to get any sleep. Writing positive songs becomes difficult for her and she scribbles lyrics on her notebook that says, “See the animal in her cage you’ve built.” Nobody other than Catherine and her team knows about this face of Ashley’s personality. In fact, one of the advisors of Catherine badgers Ashley to take pills, apparently to cheer up her spirits and keeping her from turning “under-creative.” Therefore, when Rachel receives her Ashley Too as her birthday gift, she is ecstatic knowing that she would always have Ashley O who would always have the right encouraging words ready for her. But what she does not realize is that the problem resides right there.

How Positive Is Being Too Positive?

It is not about complaining against positivity or against being optimistic or against the fact that people do not need to measure themselves against set standards in society to feel valued. It is about the wave of anthems of positivity on the channels of social media that has turned into brands aiming especially at the young generation. Life is not all roses and cherries. People feel exhausted and depressed and it is okay to feel so because things are not meant to be great always. Furthermore, when it comes to celebrities, especially the ones that are the icons of positivity, it is hard to let themselves feel that way or even let people in on the fact that they are allowed to be miserable once in a while at the stake of being labeled a fraud or a hypocrite. Similarly, the third episode of Black Mirror shows the extremely forced positivity taking a toll on Ashley O, who is strained by her success and her manager to continue to parrot slogans of empowerment so as to keep the money coming in.

While the episode demonstrates the toll the positivity culture takes on the influencers, it also presents the way in which the people at the receiving end are similarly affected. Picture submitting yourself to a relentless gush of exhortations about valuing yourself, going after your goals, being awesome and getting what you deserve, all from people leading wealthy glamorous lifestyles when all you want is a friend or somebody to communicate with. Instead, you constantly try to keep up with these exhortations and when you fail, you not only end up feeling miserable, lonely and like a failure, you start to see yourself be that failure.

Under the direction of her doll, Rachel undergoes a “transformation” and enters herself at the school’s talent contest to dance to Ashley O’s song. The audience realizes that Rachel does not possess much talent as a dancer and would probably be embarrassed at the contest, but her doll would not stop at reinforcing her falsely calling her perfect and amazing and a star. Such positive talks and reinforcement become a trap for Rachel when she fails at the talent show and spirals into depression. Many YouTube and Instagram influencers have come forward previously, talking about the adverse effects of creating the illusion of positivity on mental health. The whole façade would come down crashing if the industrial complex of the positivity culture was to reveal what really happens once the curtain falls.

That is exactly what Black Mirror’s third episode does, implying at the paradoxical reality that people would, for a fact, be happier if only they resigned themselves to their misery.