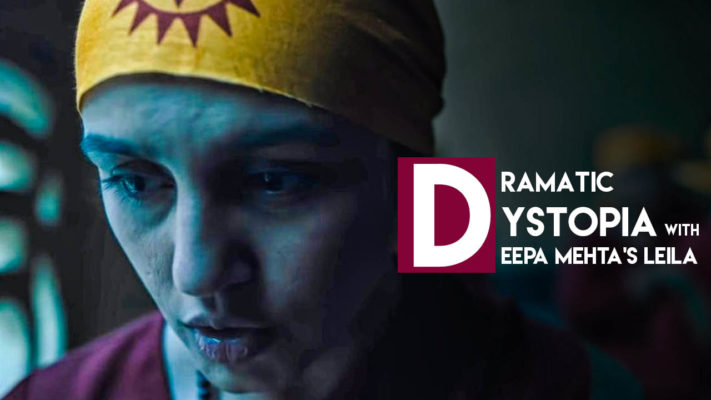 With Leila, We Get Our First Dystopian Drama, For Better Or Worse

Leila, directed by Deepa Mehta, presents us a beautifully cooked dystopian plot, every ingredient so carefully added into the cauldron.  The trajectory of Leila follows a dystopian 2047 scientifically advanced land of Aryavarta where Hindi imposition, water crisis, and right-wing extremism have all geared up for “unnati” or progress for the society. Albeit the nature of this unnati is questionable, Mehta portrays a compulsively harrowing plot that almost takes a mental toll on us.

In its serpentine twists and distortions, the show demands a level of sadomasochism and labor to watch. As our darkest fears unfold in front of us, we know Leila is remarkably contemporary and daring, unparalleled in its potential of becoming a solid reference point. Violence in Leila is lurid, punctuated by Huma Qureshi’s measured yet kowtowing performance- a Hindu mother who is trapped in an overtly totalitarian rule, serving penance for marrying a Muslim. As saffron clad women chant “My lineage is my destiny,” you know at once that polarisation has done to the psychology of the victims what Handmaid’s Tale did to the prisoners of its fictional Gilead.

Prayaag Akbar, a full-time journalist, composed Leila back in 2017 as a novel and no wonder the show remains deeply enmeshed into factual reality. Frankly, we have been programmed to view a dystopian show far from its context, as a prophecy happening in some distant land. Akbar hardly allows us any delusion, instead, he positions us like another fellow inhabitant of his Aryavarta, thrusting on us the myriad realities of an extremist regime. Leila shows us an honest expression of sci-fi dystopia- mountain of waste burning and guarding shanties like Jesus’ Apostles, water ATMs accessible by upper-castes, child labour, real-estate booms, widening gulf between rich and the poor, at once bringing you back the horrors of poverty porn. Our Shalini (Huma Qureshi) spends her days in a feverish dream and her frequent flashbacks can be equated to a coherent sub-plot in itself. Shalini was a liberal, upper-caste woman, a denizen of ugly capitalism before she was pushed into making atonement for her sin mouthing-

“Intermarriage is a sin”

Women at this centre gleefully accept pills handed over to them by filthy-mouthed, transgender guards constantly labeling them as randis. This is perhaps the crux of this futuristic society where women worship a man in formals referred to as “guru ma.” Like every other traditional social setup, the sanctity of the land has to be gained through a cunning invasion on women’s bodies, corroded after years’ of mental and physical abuse.  Saffron-clad, Hindi speaking women do absurd tasks of purifying themselves leaving the viewer feeling desperate and trapped. Later these women are sent to a labour camp and sold as slaves to colonies, a trick that reeks of Brave New World’s society based on power hierarchies and caste.

Leila Is Revolutionary To Say The Least

Leila is the ultimate reductio ad absurdum to our present ethical crisis. The cinematography by Johan H. Aidt does a brilliant job in embodying the cumulative waste of human potential, all stuck in the quagmire of the promised salvation. Leila is revolutionary, to say the least- its audacity of depicting a society where dissenters and journalists are regularly beaten up, denizens celebrate hate politics on national TV, criminalization of Gandhism, and demonization of marginalized communities. Naz, Shalini’s brother-in-law, is shown as a neo-liberal Muslim turned radical misogynist; in precisely 6 episodes, Deepa Mehta spans Naz’s radicalization instigated by state mechanisms.

Leila also brings out the worst of complacent human lives smug about the dystopia that runs parallel to it. This is the same annoying complacency evident among upper-caste affluent families that have become a relevant political discourse in the 21st century. Akbar’s broad vision in depicting the murky functioning of totalitarianism encompassing individuals and social groups as a coherent whole that contribute towards it. He succeeds in showing us the components of a state that directly benefits from such polarisation; it effectively reduces the possibilities of a rebellion against the government.

For a society like Aryavarta that has cultivated scientific advantages and on the verge of artificially regulating climate, the loopholes in the storyline appear distinct! For instance, you gape at Shalini confidently putting a hidden camera in her employer’s room. If it is already 2047 with 7D television technology, how do her treacherous, anti-government maneuvers go unnoticed? It contradicts the initial premise of tight government censorship and, therefore, the dystopia somewhat remains incomplete.

Siddharth as Bhanu delivers an austere performance breathing life into the different dimensions of his character. However, the show leaves you hankering more after Bhanu’s psychological development. You start wishing to know him more as a man vulnerable to social mandates, a thirst that remains unquenched till the end of Leila. For a nail-biting dystopian thriller that Leila aspires to be, it requires more finesse and promising psychological insights to advance.

On the whole, Qureshi’s Leila is worth watching for the gripping storytelling of survival and Akbar’s coup d’oeil. As a journalist and author, Akbar has done justice to Aryavarta’s changing dynamics with minorities, offering a direct commentary on his contemporary times without much beating around the bush. Dystopian drama is certainly the dawn of a new genre. As audiences, we can only anticipate the arrival of more crisp scripts to squash any false idealization of an extremist, patriarchal society without dissenters and solid oppositions.