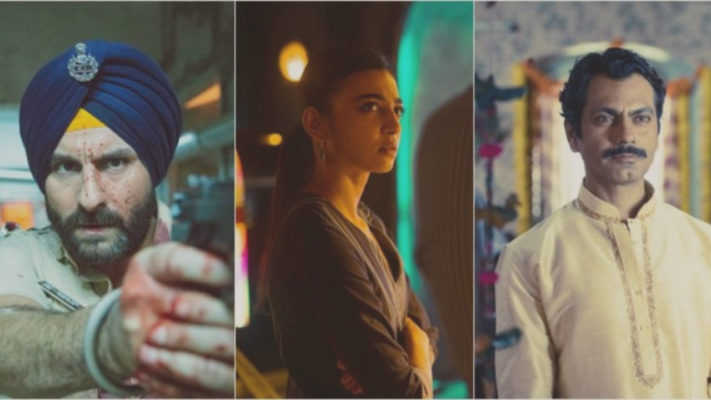 The teaser of Netflix’s upcoming series Sacred Games hit the Internet on Friday and it looks intriguing. Based on Vikram Chandra’s best-selling novel of the same name, the series follows the story of a cop named Sartaj Singh (Saif Ali Khan) who is hell-bent on catching a criminal named Ganesh Gaitonde (Nawazuddin Siddiqui). The series has been jointly directed by Anurag Kashyap and Vikramaditya Motwane and it also stars Radhika Apte. The one-minute teaser gives a glimpse of the ‘game’ between Sartaj and Ganesh, which turns out to be bigger than either men had imagined.

The promo opens with a shot of Nawazuddin Siddiqui uttering the line, “Kabhi kabhi lagta hai apun hi bhagwan hai” (Sometimes, I think I am God). Quick shots follow. An intense Saif Ali Khan, blood, money, a perturbed Radhika Apte, dance bars – the whole drill suggesting that what you see is what you will get. A possibly and hopefully intriguing crime drama with actors who know what they are supposed to do.

What happens when one day an able police officer receives a tip-off about Ganesh Gaitonde, the criminal overlord? A-rat-and-mouse chase is in offing but in Anurag Kashyap and Vikramaditya Motwane style. Saif Ali Khan plays the seasoned cop Sartaj Singh in the series, while Siddiqui plays the criminal Ganesh Gaitonde. Radhika Apte portrays a RAW agent in the show.

“The series focuses on Sartaj Singh, a seasoned and cynical Bombay police officer, summoned by an anonymous tip one morning, a voice which promises him an opportunity to capture the powerful Ganesh Gaitonde, criminal overlord of the G-Company. As the stakes mount and Sartaj seeks knowledge of his prey, it becomes clear that the game the two players thought they were engaged in is, in fact, part of a much larger scenario, one that expands beyond their city.”

Related posts:
[VoxSpace Life] The Story Of Amul : The Story Of India's Biggest Organic & Industrial Revolution
[VoxSpace Life] Syria : Life After The Civil War As Witnessed By A Survivor
VoxTalks With Tanya Burgula About THE CHALET : 'It's Important For Us To Focus On A Slightly More Co...