Posted on April 9, 2019 by Arunkumar Balakrishnan 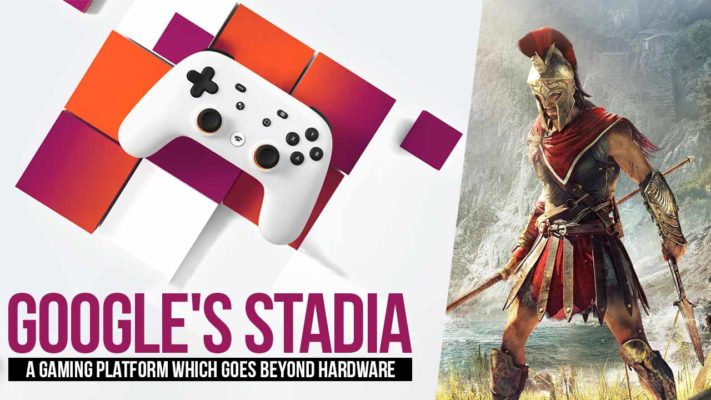 Move Over, Xbox And PlayStation, Google Stadia Is Here

Xbox and PlayStation have become synonymous with gaming for the masses. Consoles are an inexpensive and effective way for everyone to get their gaming fix from the comfort of their homes. All you had to do was buy a console, get the game you want, pop a disc in or download the game and play. But Google isn’t content with the massive stranglehold they have on the Internet and smartphone industry. Now, Google wants to see if they have what it takes to cater to the gaming demographic. Enter Google Stadia, Google’s all-new gaming platform.

Thinking Out Of The Box

The fundamental concept behind Xbox and PlayStation is that you need to buy their consoles to play games. And it makes sense. Games are highly resource-intensive pieces of software that need a lot of computing power to be as beautiful as they are today. But Google thinks the “box” is outdated and unnecessary. Google Stadia is essentially a Netflix-style subscription service which lets you play any game you want without having to buy a console or download games.

This instantaneous-style of gaming is done through the cloud, having thousands of servers run in the background, crunching numbers and rendering worlds for you, transmitted through high-speed internet connections. All you really need to do is subscribe to the service and select the game you want to play. That’s it. Whether you want to explore Ancient history in Assassin’s Creed Odyssey or slay demons in Doom Eternal, Google Stadia wants to make sure you spend your time playing games, not downloading and managing them.

But, Will The Graphics Be Good?

Gaming through the cloud isn’t a new initiative. There are tons of companies, big and small, working on it already. But there are some worries when it comes to cloud gaming. Will there be lag? (Something every gamer fears when playing online) Will the graphics be as good as locally rendered games? Google promises to put all of these worries to rest. In fact, they have promised high-quality 4K graphics at 60 fps, something even consoles can’t do right now.

Stadia – Play Anywhere, On Any Device

Another feather in Stadia’s hat is the fact that it can be used anywhere, on any device. If you have a device with a display and an internet connection, you’ll be able to play on it through Stadia. This is a drastic departure from consoles like Xbox and PlayStation, which need to sit in a dedicated space for you to the game. With Google Stadia, it might even be possible to play AAA titles like Doom Eternal while you’re on the commute to college on your smartphone!

Gaming isn’t an isolated activity. People love sharing their favourite gaming moments, streaming, and more through platforms like YouTube and Twitch. Stadia allows people not just to watch and share their moments, but take small clips of games and let their viewers play those same moments again! All of this designed to work seamlessly with YouTube, so you already know where to go once you and your favourite content creator are on Stadia.

If there’s one thing that gamers know when it comes to competing gaming platforms, it’s that a winning platform always has one thing better than its competitors, and those are exclusive games. Exclusive games convince gamers onto a platform. The better the exclusive games, the more players that flock to that platform. Google is fully aware of this, and that’s the reason why they’ve created Stadia Games and Entertainment. It’s a first-party studio to create incredible exclusive games for the Stadia platform. The studio is being headed by the legendary Jade Raymond (the woman behind the first Assassin’s Creed game, and also the creator of EA’s Motive Studios), so you can expect to see some amazing games coming out soon.

Should I Go For Stadia?

Google Stadia is in its early stages right now, and as any experienced gamer would tell you, it’s not a good idea to jump into a platform from the beginning. As such, I don’t think it’s a good idea to become an early adopter. Save your money and wait to see what Google brings out. Whether it’s through gaming innovations or incredible games, Google isn’t a company anyone should be ignoring when they decide to make a serious venture.

Personally, I think Google Stadia is a step in the right direction. The Netflix-style subscription service is bound to attract people who are going to want to sit down and play, not download gigabytes of data and then play. Additionally, this venture is bound to startle Microsoft, Sony, and Nintendo into making their own gaming platforms much more attractive. So it’s a win-win situation for all gamers.

Keep watching the Stadia name. It’s currently not available in India yet, but it does look promising, and something every ardent gamer should check out.