[VoxSpace Life] That Freaking Exam: How My Exam Horror Turned Into Reality 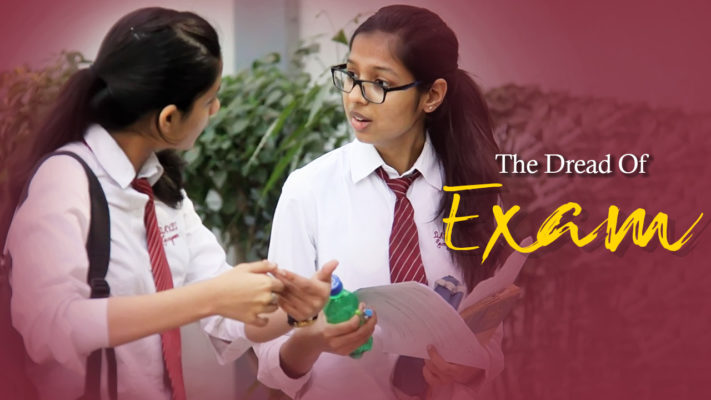 Every student has to go through this world war called 12th board exams at one point in their life.  There is a constant tension contemplating the student, with an addition of ego, which creates pressure more than a steam engine does. During 12th boards, everything around is messed up. There are bunches of previous years sample papers flying all over, notebooks and books bundled up, legs get numb sitting at the same place for hours,  change of pen every second day, no sleep, no appetite and no difference between day and night. Its very natural to have a disturbed sleep a day before boards and that too when its a language exam, as the mind has to prepare itself to keep the fingers interlocked with the pen for a duration of 3hours.

While lying on my bed, the only things running in my brain were niband, alankar, dohe, kavi ke naam , vyaakaraan etc and suddenly I find myself at the exam hall with my classmates waiting for the invigilator, who was always the teacher from the school where our exam was cantered at.

I was a topper in Hindi and my fellow friends were as weak as a paper boat left in the ocean of heavy tides.  Naturally, they had their last hopes on me, and were praying for some miracle to happen.

As we were waiting for our invigilator, we saw a blurred image of a person walking towards our class who looked very familiar to us, the image comes closer and closer and Booom!!  It’s our own school’s library teacher who was liked by the students, for her soft and lenient nature.

Hard-core pre-exam prayer turns into a celebration, everybody was seen giggling, smiling at each other and having a sigh of relief as if God himself had come down to help them. The bell rings as loud as possible and in next few seconds everybody had a question paper and an answer sheet in their hands, looks were getting exchanged, everyone was seen signalling the question paper set number they had got.

I was happy with the paper as it looked quite easy and my only task was to finish it on time. My fellow mates somehow had the courage and started whispering into my ears for help and I like a fool started helping them, whispering back into their ears clearing doubts for them one after the other and on and on…The next thing what I see is that my paper is in the hands of the chief invigilator from the board who had come to monitor the class, his fierce eyes spoke everything but the only words he speaks is – “you are debarred”!!

Was my day destined to this?  Did I study for  17 years for this to happen? How Am I going to face everyone? What are the list of lies I should prepare myself with?

As I think of all this the loud bell rings again, but why is the bell still ringing and ringing and why is it sounding very familiar to what I wake up to every morning,  I close my eyes and look up to seek gods help, who was my last hope, and I open my eyes to a different surrounding and I see myself sweating in spite of the fan revolving as fast as it could in my room. Woken up by this shock, the first thing I do is tell everybody about my dream as I believed that if it was told, it wouldn’t turn into a reality.  I told this to all my friends and they passed it on to others. I was feeling better and normal having come out of this nightmare zone and I was ready to go to the exam hall after the prayer got done.

I sat on the bench which had my roll no. written on it and I was busy assembling my hall ticket, pens, scale and I suddenly see my class hooting and clapping loudly with joy and excitement and I lift my head up to see what was happening and I was left dumbstruck,  it was the same library teacher of my own school. I was in shock, was speechless, motionless and  I pinched myself to make sure if my dream was still on, but I was very much sitting in the hall.

Despite all this drama, I started writing my exam but the same things were happening which I had already seen a few hours ago.  Knowing the so-called future I could have shut myself by not helping my fellow mates but no, my sympathy levels were too high, and guess what the chief invigilator enters and screams “ how dare you !!!”

I think my heart must have had  surely stopped beating for few seconds thinking of what I was going to hear in next few seconds  and I tightly cross  my fingers  as if it was going to help me and I see the invigilator  walking  towards me with his fierce full eyes  to snatch the paper but it was not from me.

It was from the guy sitting just a bench behind me, I  was in a shocked state and my fingers were still crossed but I had something else more important to focus on at that time.  I slowly release my crossed fingers, start breathing normally and got back, trying to focus on my exam.

It’s been 3 years since this incident and till date, I couldn’t get an answer as to how something like this could happen? This unsolved mystery has just made me realise that both dreams and myths are important communications from ourselves to ourselves. If we do not understand the language in which they are written, we miss a great deal of what we know and tell ourselves in those hours when we are not busy manipulating the outside world.