[VoxSpace Life] Adopt A Heritage : Heritage For Sale, Or Not? 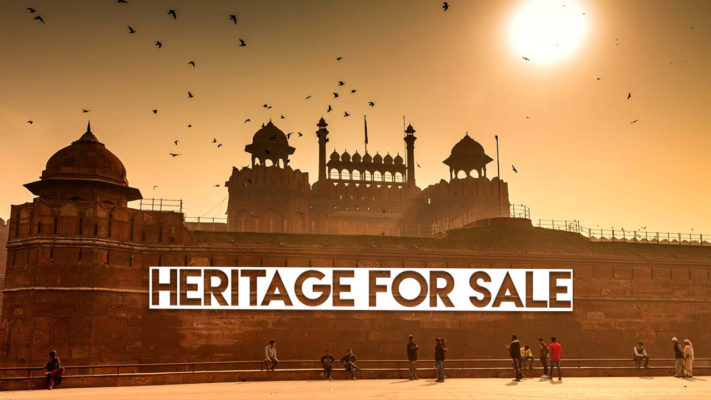 Dalmia Red Fort, how does it sound? Weird isn’t it? Many of the Indians think this would likely become a reality in future but it is far from reality. Red Fort will be Red Fort. The recent furore is because of lack of understanding and being emotional at the wrong time. Before throwing light on the issue at hand let us check what this program is about.

Overview Of The Situation In September 2017, the ministry of tourism, Government of India launched a program “Adopt a Heritage, Apni Dharohar, Apni Pehchaan, and Project for the development of Tourist Friendly Destinations, September 2017”.

The aim of this program is to involve public sector companies, private sector companies and corporate citizens/individuals to take up the responsibility for making the heritage and tourism more sustainable through development, operation and maintenance of world-class tourist infrastructure and amenities at ASI/ State heritage sites and other important tourist sites in India. This program enhances the revitalization process of heritage sites and promotes tourism.

The contributing entity will be called “Monument Mitra”. The body with the best vision for the heritage site will be given the opportunity to maintain and renovate the ancient, medieval and modern heritage sites.

In this process, the contributing body would get limited visibility at the site and on the Incredible India website.

The focus of this project is on renovating the heritage site and providing basic amenities such as infrastructure, cleanliness and sanitation, public conveniences like food and drinking water, ease of access for differently abled and senior citizens, standardized signage, illumination and advanced amenities such as surveillance system, night viewing facilities, tourism facilitation center, and all-around security.

The idea of the program is definitely good.

The priority areas of the program are listed as:

The Issue At Hand

On April 9th The Government of India and Bharat Dalmia group signed a Memorandum of Understanding for the development, maintenance and operation of tourism amenities in and around Red Fort.

The issue is that people are assuming that allowing a private company the maintenance of a heritage site would lead to privatization of the site. The point is valid to some extent and situations. Instead of writing something elaborate I would divide this issue into pros and cons.

1. You guys might have seen many heritage sites with pan spits and writings on them, what idea does it give about our country? Many monuments have people lining up to it, to urinate on the outer walls of them, what image does it give of the citizens of the country and its government? Now take a corporate building do any of such occurrence take place? I hope you get the idea. When the citizens and government are inefficient and incapable of maintaining heritage sites it is better to give the maintenance of such to capable hands. Making this a Public Private Partnership should be a good idea to check accountability.

2. Many heritage sites are not accessible to disabled and elderly people. When the Monument Mitra claims that they will provide the sites with such accessibility, which the government could not provide in so many years, then giving them a chance is worth a shot.

3. So many heritage sites are in hapless conditions with lack of proper maintenance, taking the example of Taj Mahal, a few days back the pillars of TajMahal collapsed due to heavy rain, the monument which has sustained for more than five hundred years is in such bad shape. The government is unable to avert the corrosion of the world-famous monument; also it is flocked by thousands of tourists which takes a toll on it. A private entity might be able to revitalize these monuments and control the stress.

4. We are such irresponsible citizens that we litter everywhere and the prime examples are these heritage sites. People litter after consuming wherever they want, even though the government has provided with waste bins, there is no one to keep a check on it. This problem could be tackled if the maintaining authority is strict and not lackadaisical like the public authorities.

6. Providing advanced amenities such as surveillance system, night viewing facilities, tourism facilitation centre, and all-round security, which would take government a lot of time to provide can be achieved with help of private agencies swiftly.

7. If the vision of the private entity is positive then there is no harm in giving them the opportunity.

1. If the private entity starts writing its name everywhere especially on the walls of the monuments then it is a negative aspect of handing over the maintenance to it. They should remember that their job is not to promote their brand but to promote the heritage site.

2. It may use underhanded techniques to generate profit such as with toll gates on national highways. It should remember that maintenance of the heritage site is part of their CSR i.e. Corporate Social Responsibility, and is not for profit. They may charge for entrance, and once inside may charge for other facilities.

3. The government may give the contract to the highest bidder and not the bidder with the best vision.

4. The group may just obtain the contract to advertise themselves and leave the main concept i.e. revitalizing the site.

6. Tampering with historical facts may occur.

8. Tax benefits in the name of CSR.

1. The MoU should be a Public-Private Partnership i.e. both need to work together and be accountable to the citizens of the country. With PPP the risk of a single entity taking over a site is gone.

2. Before giving anyone the contract of maintenance, the visions of the bidders should be made public and should be given only after expert advice and positive public response.

3. The progress of development should be checked annually.

4. Both the GOI and the private entity should be accountable.

5. The government should check that the Heritage and Culture of the site are not lost in the name of development.

6. Brand promoting should be in the last seat. It is not bad to take credit for the work you have done. Take credit, do not promote it through hoardings and signage.

7. A uniform policy about heritage and heritage conservation should be formed in which involvement of corporates and guidelines of adoption of the sites should be in detailed form.

8. The fees of the entrance and other facilities should be in open. It should be checked that it does not lead to profit generation, which would go into the pockets of the corporates.

9.  It should be checked that the private entity in a period of time does not take the possession of the whole site.

10. It should also be checked that the site is never associated or called with the prefix of the corporate for example ‘Dalmia Red Fort’. “The centre has clarified that ‘The Adopt a Heritage’ is essentially a non-revenue generating project. It is part of responsible tourism where the ‘Monument Mitra’ essentially spends his CSR funds for upkeep and maintenance and gets limited visibility and access to non-core areas. The agency was selected on the basis of the unique concept of vision bid.

I hope this is true.

This situation has aroused because the citizens of India could not protect their own heritage. They should have been emotional when they saw a person spitting pan or urinating on the walls of our cultural sites. If they had reacted then there would have been no need of creating a program such as “Adopt a Heritage”. When we are incapable it’s better to give someone who is capable.

Well according to me the idea is good, it just needs to be seen how it is implemented. For now, it can’t be assumed that the government has “sold” the site. If someone can maintain something properly, especially our heritage sites, which are in very bad shape, without taking possession of it then it is worth the shot.

“A nation’s culture resides in the hearts and in the soul of its people.” – Mahatma Gandhi