[VoxSpace Life] Ten Dishes That Scream Hyderabad But Are Not Biryani 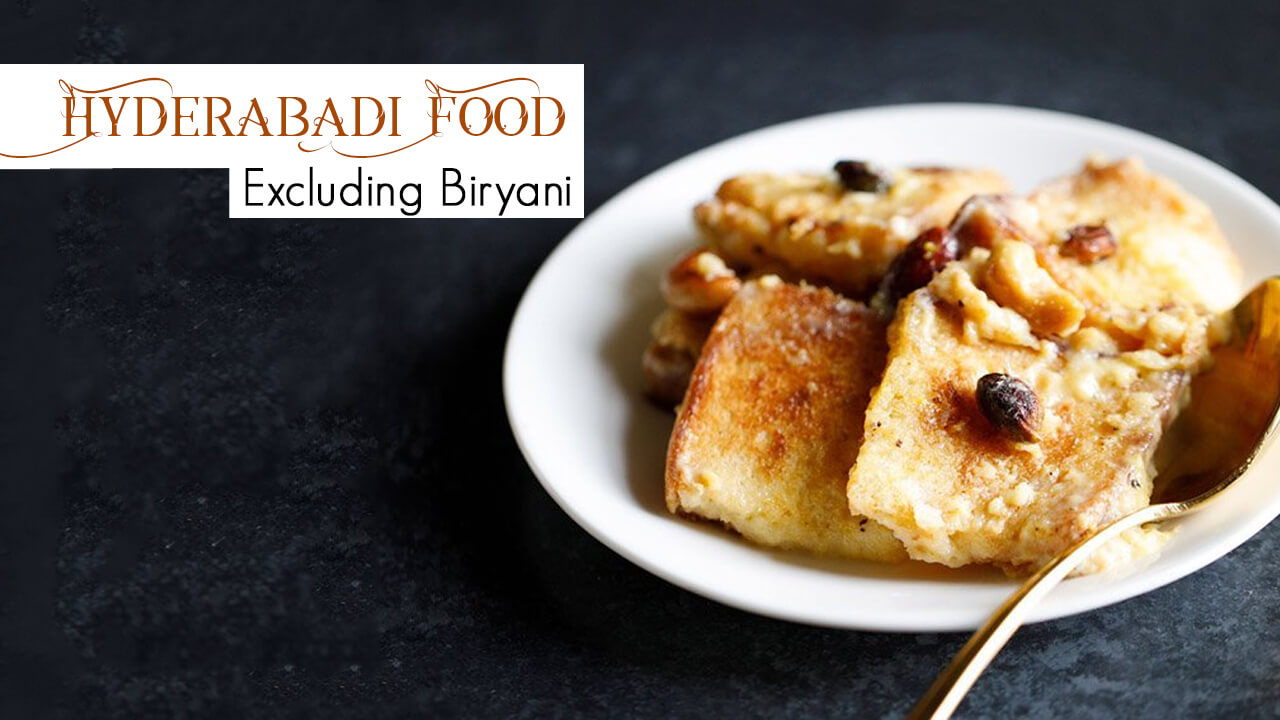 Although Hyderabadi Biryani Will Always Be Special, The City Has A Lot Of Lip Smacking Food To Offer

Charminar, Golconda Fort, Hussain Sagar, pearls all aside, the true reason to visit the city of the Nizams is its food. Unique and packing a burst of flavours, Hyderabad is a mecca for foodies. But if you thought Hyderabadi Biryani was the only thing that the city has to offer then you have no clue what you are missing out on. A history and culture that revolves around food, your bucket list of culinary adventures are incomplete without these authentic Hyderabadi dishes.

In the spirit of the quote ‘ Life is uncertain, start with the dessert’ let’s kick off the list with a dessert that Hyderabadis swear by. Bread fried and soaked in milk flavoured with cardamom and cinnamon and often saffron it is as sinful as it sounds. No Hyderabadi meal is complete without a generous helping of this delicacy. Also, a small tip, it pisses off Hyderabadis immensely when you call it Double Ka Meetha, a distant cousin of Shahi Tukda;  and you don’t want to piss off a Hyderabadi, especially when it comes to food.

Another sweet delicacy that is integral to the city is Qubbani Ka Meetha or Qurbaani ka Meetha. Dried Afghani apricot soaked and syrup and topped with malai; this is a staple in all Hyderabadi weddings. You can go for a twist and add a little ice-cream as a topping, and you have a winning dish that screams Hyderabadi and its unparalleled love for decadent food.

Hyderabadi gives an interesting twist to the old staple samosa, and the result is fluffy and airy pockets made of maida filled with minced meat. Trust the city to put a meaty twist on everything and make it taste heavenly. A favourite snack of Hyderabad, it is literally impossible to stop at just one when it comes to Lukhmis.

As the name suggests, it basically is meat cooked on a hot stone. But the unique mixture of spices and the unique way of cooking it on a flat hot stone gives it a flavour and texture that I can vouch you have never tasted before. Another must-have in Hyderabadi weddings; you can believe the tricks it plays with your palette only once you have tasted it.

No, it is not your usual roti that you have with dal and sabji every day. Made with milk, maida, saffron and ghee, it is as royal as roti gets. But then you can’t expect any less from the city of Nizams. Enjoy this with a side of sumptuous Kurma, nihari or paaya, and you will never look at plain old rotis the same way ever again.

Ok, I know I promised that there would be no mention of Biryani, but this is extremely different from the much talked about and legendary Hyderabadi Biryani. Kalyani biryani, which pre-dominantly uses beef as a choice of meat, is what can be called poor man’s Hyderabadi Biryani. Instead of the rich and expensive ingredients that go into making Hyderabadi Biryani, Kalyani Biryani uses simple and more locally available spices. But do not be fooled into believing that it packs any less punch of flavour than its expensive counterpart. Give it a try, and you will thank us later.

It is only when you spend a Ramzan in the city that you can understand the true magic that only Hyderabad is capable of wielding. One of the most important ingredients to this magic is the Hyderabadi Haleem. Slow cooked mutton with a plethora of spices served with fried onions and fried dry fruits on top is what every foodie’s dream is made of. The fact that is only available during Ramzan is a little sad, but it also adds to the appeal of the dish.

Ask any Hyderabadi the what their sole craves at the end of a tiring day or every one hour for that matter, and the unanimous answer would be a cup of Irani Chai and Osmania Biscuit. This combination is to Hyderabadis what dhoop is to jaadu. A cup of Irani chai and Osmania Biscuit is what a true Hyderabadi needs to conquer the world. Irani Chai is basically normal chai but with a generous amount of milk that gives it a thick and dense consistency and Osmania biscuits are light, fluffy, flaky and slightly sweetened biscuits that are a staple at every Hyderabad bakery that dots every corner of the city. Its literally getting yourself the most authentic slice of the city’s historical and cultural culinary legacy.

The city’s obsession with everything meat is well known, but give any Hyderabadi a bowl of Baghara Baingan and see the smile on their faces. Made with brinjals in a spicy curry mixed with curd this delicacy has a unique taste that you have never associated with baingan before. Add some hot, steamed rice, and you have a vegetarian dish with unmistakable Hyderabadi touch.

Yes, you get Chicken 65 in many parts of the country, but this Hyderabadi darling is different from all of them. The striking orange colour is bound to lure you. The addition of curry patta and other local spices gives it a unique taste. From a trusted aide to biryani to a star dish to be enjoyed with roomali rotis or just to snack on, the love that Hyderabadis have for this dish is unheard of.