[VoxSpace Selects] Netflix’s Big Splash Into The Indian Web Space – What Does The Future Hold? 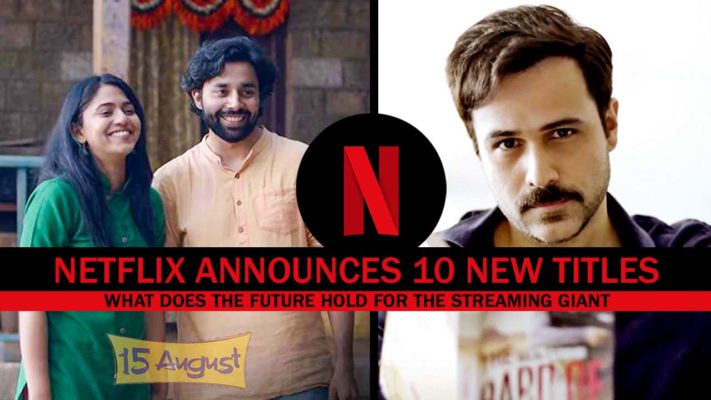 Netflix has been in the entertainment market for quite some time now. It has even ruled it for many years now with its various web shows and movies all across the globe. But one area of concern for the gigantic company is, its success in India. It started on a positive note with movies like Love per square foot and Lust stories.

Netflix though got widely popular with its web series, Sacred Games, helmed by Anurag Kashyap and Vikramaditya Motwane. The show got pretty popular, gained a lot of praise and was a big success. But Netflix couldn’t enjoy the success for too long. Shows like Ghoul, Selection Day and Rajma Chawal which released after Sacred Games were not received well by the audience.

But it didn’t stop Netflix and they kept releasing shows after shows, be it web series or films like Little Things, Yeh Meri Family and Cricket Fever: Mumbai Indians, etc.

Last year (2018), Netflix announced eight new films and one new original show from India. Couple of them are already streaming on Netflix. They are –

It is about a haunted house and a haunted book that stir the imagination of a group of young, wannabe ghost hunters, and a dog, determined to capture the ghost that plagues the notorious home in their neighbourhood in Goa.

It is about an under-confident but talented girl sidestepped at every stage of her life, who seeks out an enigmatic con to help recover her stolen car from a goat-loving, crazy Mumbai gangster. Along with Mithila Palkar who won hearts in Netflix series Little Things 02, Abhay Deol and Vijay Raaz will act in the film. ‘Chopsticks’ is produced by Ashvini Yardi of Vineyard Productions and directed by Sachin Yardi.

15th August, produced by Madhuri Dixit, is set in a Mumbai chawl, and follows the course of a single day as its residents prepare for the flag-hoisting ceremony. This Marathi film is about the struggles of middle-class India and in a soaring climax, it is about how love sets us free.

Produced by Anushka Sharma and Karnesh Sharma’s Clean Slate Films, Bulbul is a period piece set in a vibrant atmosphere amidst age-old beliefs and superstitions. Satya and his brother’s child bride, Bulbul, were inseparable until he was sent to England for his education.

It is a bromance about three college graduates from small-town India, captivated by the startup mania sweeping the country. As they enter the rollercoaster startup ecosystem of big dreams, big money and bigger sharks, they are faced with a big choice – their dreams, or their friendship. Directed by Udai Singh Pawar, Upstarts is produced by Raja Menon, Janani Ravichandran and Jawahar Sharma of Bandra West Productions. This film is supported by real-life heroes from the startup world in Bengaluru.

Based on the best-selling novel of the same name, it is the story of a brother and sister who fall in love with the same man, and how a traditional Marathi family is shattered by the ensuing events. This story is written and directed by Sachin Kundalkar.

Firebrand, directed by Aruna Raje and produced by Priyanka Chopra, is a Marathi Film that follows a successful lawyer, a sexual assault victim played by Usha Jadhav, as she tackles difficult family cases while also dealing with intimacy issues in her own marriage. Girish Kulkarni essays the role of her husband Madhav Patkar, an architect by profession. Sachin Khedekar and Rajeshwari Sachdev play a couple in the movie which is high on drama.

Directed by Sarthak Dasgupta, it is a story about an emotionally troubled music teacher, essayed by Manav Kaul, who gets a chance to come to terms with his bitterness with an estranged student, now a renowned celebrity singer of Bollywood.

What’s Next In The Line

This comes months after the streaming major had announced eight new original films and a new original series for the India market. The company said that a total of 15 new original Indian films will be available to its members across the world. The new announced shows are –

Lust Stories directors Zoya Akhtar, Karan Johar, Anurag Kashyap and Dibakar Banerjee reassemble to helm Ghost Stories. It will feature four spine-chilling stories, one by each director and is produced by RSVP and Ashi Dua.

It is based on S. Hussain Zaidi’s unreleased book and explores the life of a Mumbai Police officer who is tasked with creating a team of encounter specialists and how his students struggle with the question of morals, honour and patriotism. This is the second venture by Red Chillies Entertainment and is directed by Atul Sabharwal.

It brings together Shirish Kunder and Farah Khan as they tell a story about a doting wife who has to murder someone exactly like a serial killer on loose, because only then can she prove her husband to be innocent of murder charges for which he’s imprisoned.

Guilty is produced by Dharmatic and is directed by Ruchi Narain. It shows the story from the eyes of a musician girl whose college heart throb boyfriend is accused of rape.

It revolves around the discovery of ballet by two boys and their attempts to escape their challenging environment. It is directed by Sooni Taraporevala and produced by Roy Kapur Films.

It is directed by Shashanka Ghosh and Samit Basu, from a script by Samit Basu and produced by India Stories. It tells us the story of a man who is anti-social and as a result, locks himself up in his house only to realize that he cannot stop the world from interacting with him.

Kaali Khuhi is set in a village of Punjab and explores the life of a 10-year-old girl who is the only one capable to save the village. The film is directed by Terrie Samundra and produced by Manomay Motion Pictures.

It is directed by Neeraj Udhwani and produced by Seher Aly Latif and Mutant Films and explores the life of a confused millennial who sets out on a journey to become a film star but comes to terms after spending a romantic summer with a girl.

Freedom, directed and produced by Dibakar Banerjee, tells a story about an Indian family connected with “personal, ideological and sexual history of India”.

Serious Men is based on Manu Joseph’s book by the same name and is directed by Sudhir Mishra. It is a film on a slum dweller who dupes the country by having everyone believes his 10-year-old kid is a prodigy.

A lot Of Variety In Future

The movies will cover a wide variety of genres, from romance to horror. During the announcement, Srishti Behl Arya, Director – International Original Film, India, Netflix, said in a statement, “Given our diversity, history and culture, India is home to powerful stories waiting to be told to audiences around the world. The depth of talent and vision of our creators is enabling us to create films our members will love. We want to be a home for India’s finest filmmakers where their stories travel to more people than ever before.”

Apart from these, there are some more shows that have been announced in the past which are most likely to release this year. Like –

Set in a dystopian world, the series will follow Shalini, a mother in search of her daughter Leila whom she lost one tragic summer. She deals with various hardships in the course of her search, in a story of longing, faith and loss.

“Midnight’s Children” follows the life of Saleem Sinai, born on the stroke of midnight on August 15, 1947, the time of India’s independence. His every act is mirrored and magnified in events that sway the course of India’s national affairs; his health and well-being are inextricably bound to those of his nation.

Ganesh Gaitonde’s story has only just begun. Thirteen days gone, Bombay has twelve left. This game isn’t quite over.

Baahubali: Before the Beginning

From before Amarendra Baahubali’s reign as king, comes a tale of power, politics and intrigue of Queen Sivagami’s rise from a vengeful girl to a wise and unequalled queen. Witness the legacy of Mahishmati as it grows into a mighty empire no one dares to oppose.

Set against the backdrop of the Indian subcontinent, the multilingual series will tell the story of an expelled spy, Kabir Anand, who is recalled from his new life as a Shakespeare professor in Panchgani to save his country and long-lost love.

Looking at the shows announced and their loglines, one thing is sure that the audience will have a lot of variety of content to consume. With back to back to the announcement, one thing is clear that Netflix is going big and is ready to conquer the Indian market. Hope these shows reach more and more people and are worth the wait.