[VoxSpace Selects] When Will The Eternal Writers Block Existing In Telugu Film Industry Be Resolved? 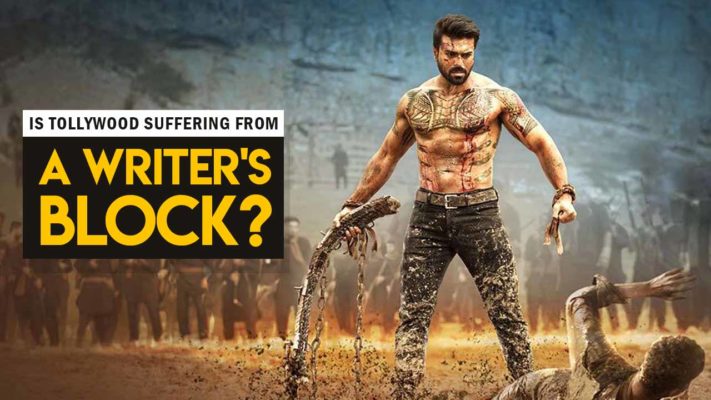 Writer’s Block For Decades Together!

With Indian Entertainment industry undergoing a massive change with respect to content production, Telugu writers and filmmakers still seem to be far behind the trend. There are still very few films that come out every year from Tollywood which have something interesting to offer to the audience.  Among the innumerable films that are releasing every year, only a handful of the films are cracking the box office mantra and of them, very few happen to garner critical acclaim.

Even the digital space is growing by leaps and bounds with incredible content from various languages but Telugu Cinema and its writings seem to be stagnant. With a few ‘somewhat good’ films here and there and almost unworthy content on the digital platforms, Tollywood and Telugu writers seem to be under a writer’s block for decades now and we don’t know when will it end!

Almost all of the stories have a typical template and the story most predominantly revolves around a person. Particularly a man. He is the hero. The strongest and the nicest. He falls in love with a girl and saves her life or solves an issue that the whole world is suffering from. And thus becomes the superhero of the film whom the villain at the end will miraculously get along with or remain notorious forever and end up in jail.

There’s nothing wrong with such stories. It’s the repetitiveness that needs to be fixed. With such films, it feels like eating the same daal in 20 different styles. But daal remains daal at the end of the day. When will the writers shift to other vegetables and experiment and create new recipes? (Okay, the metaphor is not so great, but you got it right?)

Struggling To Come Out Of Cliché

Even if the writers come up with any story that’s slightly different, they end up faltering when it comes to defining the characters. There’s always a clichéd description of the characters and they seem to just play around them. We’ll always find a friend who supports the hero no matter what, another friend who exists only to be slapped by the hero for his poor jokes (and that somehow is supposed to be funny).

Let’s not forget our mothers who are always either highly emotional or self-sacrificing who loses her husband in the middle of the story or is widowed from the beginning. There are aunts and cousins only to appear in one or two scenes and fill up the family picture in wide shots. Another place you’ll find them is the climax, giving intense expressions in reaction to Hero’s preaching or final confrontation with his parents, villain or the love interest.

A villain who is always psychotic or forcefully funny or sometimes stupid. A leading lady who is either too nice or too bubbly or too depressed. No matter how new or different the story is, there’s no chance that you’ll not find a peppy number with a lady who has got nothing to do with story dancing with the hero for five minutes and then vanishing (God knows why it’s called an ‘item song’).

There seems to be a massive divide between the audience and the writers since forever. It’s appalling how few writers think and believe that some disgusting storylines or baseless twists will work and go on with convincing the producers and even making the films. It’s funny how a lot of filmmakers assume what the audience want and keep making the same old stories despite repeatedly being proven wrong. The focus is more on ‘what will the people like? what will they enjoy? than ‘what should I present? Is it socially relevant? What is my point of view?’

Although it’s important to think about the audiences’ preference, that’s not the only criteria to be considered before beginning with a story. What do I want to talk about? What is my take on it? These are the questions the writers should ask themselves before starting off (in my opinion) for this is essentially a medium of communication and if the writer has no clue or is least bothered about what is the film going to convey, then there’s no point in making it.

Had Maniratnam thought about what the audience will like and never experimented, an Anjali would never come out! Also, he is one of the best examples of making relevant films with utmost beauty. Kannathil Muthumittal is both relevant and creative. It talks about the social situation at the time and is also interwoven with a beautiful story. It’s heartbreaking to see such films only once in decades.

Unmindful Of The Unexplored

There’s the least attention on the issues and topics that are unexplored. Cinema is a reflection of our world and our lives. When we have so many different kinds of people and conflicts between them, why stories of only one kind of a ‘hero’ and his greatness are being told over and over again?  Economic stature, Social conditioning, digital divide, survival stories, artistry, emotional strength, Ego conflicts, glass ceiling, struggles of suppressed communities, mysteries of our universe and many more subjects have not been explored completely yet.

Shouldn’t more stories about middle-aged individuals be told?  Why are they confined to be sidekicks or supporting actors only? Will a maid(house help) not have a story? What was the driver of that bus stuck in a strike going through? What is his story? There’s so much to be explored, understood and retold.

Innovating new stories or reinventing old tales should happen more. With audiences’ changing preferences and clear rejection of stale storytelling, it’s high time the writers changed the rotten ideas from their plots. More writers and filmmakers should make a move to surprise the audience with interesting and unexpected concepts.

For life is dynamic, it’s stories should be dynamic too!