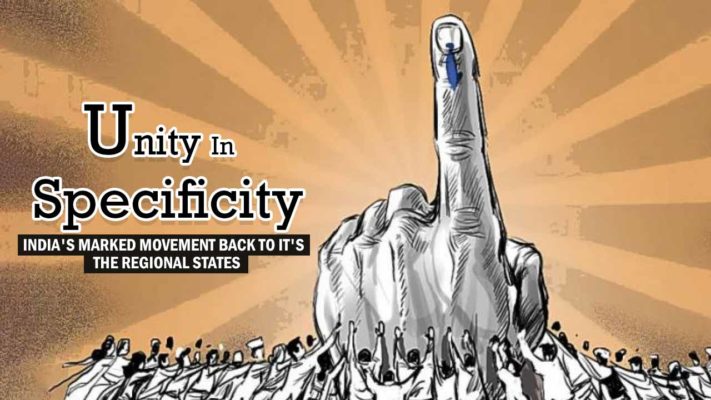 The Phenomenon Of Federal Associations

The other day, I had the chance to watch an interview of Telangana’s Chief Minister Mr K Chandrasekhar Rao, taken by NDTV editors in his camp office. The said interview, coming right in the middle of the election season, served as a commendable precursor to what could be expected of the political future of the country as a whole. Of many things conversed upon, ranging from electoral trends, political manifestos, needful alliances (which I’ll touch upon again later), and welfare schemes, one thing that truly stuck with me was a thought that the honourable Chief Minister stressed upon for a minute or so. The point was a symbolic representation of a monumental cultural change that we as Indians have come to realize in the last decade or so. India is turning to its regional states for survival. Yes, India is still in pursuit of becoming a sustainable global economy, it’s marking its territory in various socio-economic standpoints in worldwide markets, so on and so forth. But dare I say, the core strength of the country no longer rests in the age-old idiom of ‘Unity in Diversity’. In the context, I feel the strength of the country, by and large, is now being tailored around ‘Clarity in Diversity’.

While in the interview, Mr KCR spoke of a small statistic which in its occurrence defined what modern-day India represents. He spoke that regional states hold more power in deciding the fate of the country, than the country itself. You see, they command 60% of vote bank, in terms of assembly representations, from a meagre 15% a decade earlier. India today stands at a precipice of Federal Conglomerate governance than a unified Central Democracy. For anyone following the elections season this time around, it is quite imperative that a focused reach out has been employed by national parties to lure and ally with regional parties for their existence. Not a thing of past, then when we see parties led by leaders like KCR (Telangana Rashtra Samithi), Jagan Mohan Reddy (YSR Congress), Mamata Banerjee (All India Trinamool Congress), Akhilesh Yadav (Samajwadi Party), Mayawati (Bahujan Samaj Party),and Naveen Patnaik (Biju Janata Dal) have become the key players who amongst themselves hold the power to decide the central governance. In the same interview, we see KCR talking about an alliance which is, in his own words, anti-BJP and anti-Congress. As a parallel to UP Mahagathbhandan, which involves Congress at the spine of it, this suo moto Bloc professed by KCR, seems a risky venture based upon the facts of contemporary volatility already existing within the states these parties represent. However, the fact at the end of the day remains true, to which even Mahagathbhandan is a vivid example. The regions will define the country, and no longer, the other way around.

Beyond Politics – The Socio-Economic Migration

Politics, as discussed above is just one facet of this phen0menon which has been an underlying sensibility over the past decade or so. When one sees beyond politics, which for the matter of fact, is still an abstract occurrence for those who do not follow it methodically, there is an imperative migration, of people, purposes, and products towards states. The sense of regional applicability has grown by leaps and bounds. Let us take an example of Industry and Employment. As far as I understand, today we see people preferring their hometowns or home cities over other options.

In a recent BPO placement for a nationalized bank, a figure of a whopping 72% of new recruits had been asking for local preference placements. We see businesses being started in the same city, rather than carried around where the demand is. Cross border trading has been restricted to just material and finished goods transport. Every state and its populace is concerned about self-production and self-sustainability. This thought process, although brings us closer to the system of Federal governance, it also shakes up the ancient buildings of unified democracy. The states have realized that internal production and sale, bear better fruits and results than at a national level, owing to different state laws and self-containments.

When we look at the startup culture, we rarely see products which are being developed for a broader spectrum of ethnicities or belongings. Yes, technology, on the other hand, recognizes the potential of ‘regionalization’ and has brought out solutions for the same. Right from the concepts of advertisements, to showcasing the product online and printing the user manual in a regional language, technical startups and world businesses are now focusing on the ‘regionalist’ demographic. What is local is being appreciated more, as there has been a dramatic shift in the economy.

The Defining Divide Between A South Indian & North Indian

Perhaps it is a south Indian in me speaking, but I grew up watching people always mutter and whine about how the taxes we pay from our pockets, are enjoyed by some fat North Indian sitting in an AC room in New Delhi. We farm around, while he scams around. To add colour to that fact, the biggest scams of India, have very rarely been perpetrated by a South Indian when compared to a North Indian. Not to generalize, but well North Indians had money flowing in by tons. And yes, we got roads and flyovers in return, but then it was just a small bowl of peanuts. And perhaps, there were millions like me who grew up with this contempt in their minds and hearts, that when an opportunity came, our actions became all the more divisive and decisive. The IT industry came along as the biggest blessing for South Indian population. We were bad in running businesses, but hey we were good making your PC systems speak. And then came the chance we were so patiently waiting for. Economy by the time India hit the new millennium stood at economic polarization. The flow of money changed directions. It no longer flowed upwards, but sideways as money and moneys-worth got repatriated from US, Europe and Arab.

And one stands to wonder, what does this have to do with the actual movement of India to States, then the fact boils down to ‘economic polarization’ occurring in states. Some states like the then unified Andhra Pradesh, Karnataka, Maharashtra, Tamil Nadu became cash rich, and states which didn’t board up the IT bandwagon like Odissa, UP, Bihar, West Bengal, Kerala, and Haryana suddenly found themselves losing track in the finance ladder. This feeling of being left out, and being everywhere, made the center lose control of its dominance. When states became self-sufficient, by definition, the central governance became irrelevant. And when states failed to catch up to the global trends, by definition, central governance became inefficient.

In either case, the anti-incumbency feeling across the nation grew like never before. And neither BJP nor the UPA central government did much to eradicate that feeling. Ironically, within the BJP regime initiated from 2014, one could see a clear bias towards certain business-oriented states, and gross mishandling of employee-based states. In this context, it comes as no surprise that the special state development status promised to Andhra Pradesh never truly took form. It seemed BJP’s step-motherly treatment, towards the Southern States, had become an open secret. The matter of things thus was taken up by the states into their hands, to carve out a better future for themselves.

Regionalization and non-dependency of Central governance became the norm of the day. ‘Make in India’, unintentionally led to ‘Make in Your Own State’. Jobs were created, schemes were introduced, infrastructures were built, technologies were implemented, and soon every state started living on its own. A lot has changed from 2014 when BJP took the throne and promised a unified and fair statehood to each state. Now, in 2019, BJP realizes that it needs individual states to support itself now more than ever. The same thought process today designs the campaign of Congress party. National parties realize that their own individualism cannot alone win them anymore.

‘Regionalisation’ also had its effects on various other sectors including Entertainment, Sports and Culture. This is something I’ll ponder upon in the next part of this series. Till then, let’s understand that we are not far from the time when Decentralization of power will happen sooner than we expect. This election season for all these reasons is the most definitive in the recent history, and hopefully all for good.