Pragati Nivedana Sabha Of TRS : Of Delhi Supremacy, Federal Front And The Snippet Of Telangana’s Future 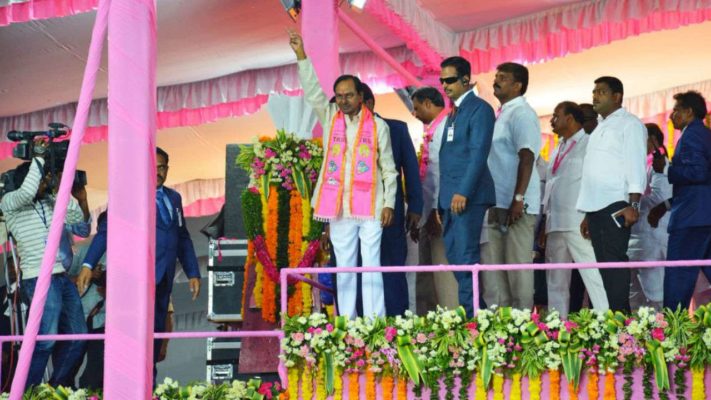 TRS Nivedana Sabha – A Blueprint To A New Federal Front

The TRS on Sunday, held a mega rally, a one of a kind “mother of all meetings” 25 kilometres outside Hyderabad, the capital of the state of Telangana. It was named “Pragati Nivedana Sabha”. This rally was preceded by a Cabinet meeting where a decision regarding the dissolution of the Telangana Assembly was supposed to be taken but no concrete decision was taken in this matter. K Chandrasekhar Rao, the Chief Minister of Telangana said that he has been authorised by the State Cabinet to take a decision on the issue of the dissolution of the Assembly and go for early polls if he deemed it in the interest of Telangana and her people. He assured his supporters that there will be another Cabinet meeting soon to decide on this matter and he would communicate his decision as soon as possible.

The Biggest Political Rally Ever…

The turnout at the rally was estimated to be close to 25 lakhs. KT Rama Rao, a TRS leader and the Chief Minister’s son was quoted saying that this TRS is going to be the biggest political rally ever held in India. Even overnight rain did not keep the people away from this rally and the turnout was huge. This meet also commemorated the 4th anniversary of the formation of the state of Telangana. On agenda for the meeting was the showcase of the State Government’s achievements for the first four years of the State and its Government.

The Chief Minister took the stage and vowed that the people of Telangana would rule themselves with self-respect without bowing to Delhi parties. He cited the example of Tamil Nadu and pleaded to the people to not be enslaved by Delhi. He was quoted as saying, “Do you want to be enslaved to Delhi?”. “We are confident of forming a federal front without BJP and Congress”, the CM’s son and IT Minister said. He also added that they are confident of winning the early elections if they happen.

The aam aadmican only wait to see how this political battle for self-governance turns out and whether self-governance, in the long run, is beneficial to the people. Only time will tell.