The Nagaland Floods : As The State Reels Under Catastrophe It Remains Neglected Even Now 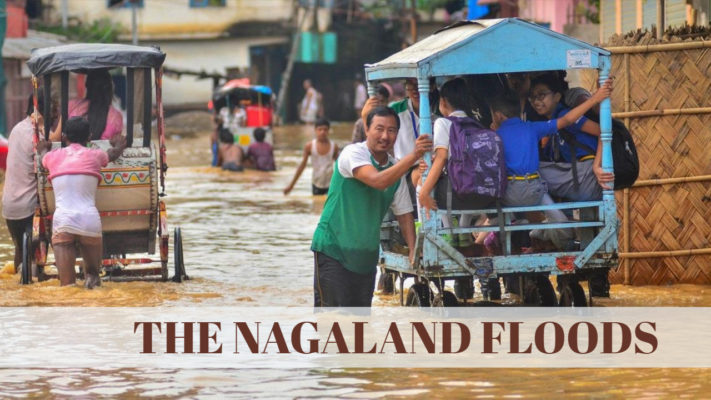 While the nation is now moving towards “who-did-what-wrong” conversations about the Kerala Floods, there is a whole another part of India that we need to focus on. The North-Eastern states are in dire condition due to the floods there. Nagaland chief minister Neiphiu Rio has requested for a helping hand to overcome the havoc caused by the rains this year. Apart from Nagaland, Assam and some regions of Shillong are fighting the water flooding their livelihood.

In Assam, rivers Brahmaputra, Dhansiri and Jia Bharali are causing the catastrophe in Dhemaji and Golaghat villages. At least 50 people have died in the floods and landslides this year alone. Relief camps have been set up for the affected people as around 100 houses have been eroded in the disaster. According to the latest flood report by Assam State Disaster Management Authority, 355.63 Hectares of Crop area has been destroyed so far.

The Chinese government shared information about the rising water in Tsangpo river (River Siang in India) and the states of Assam and Arunachal Pradesh was on flood alert since. The water level in Tsangpo hasn’t risen this much in the last 50 years. Indian Airforce and other rescue teams are in action with their teams airlifting people stranded on islands. The National Disaster Response Force (NDRF) has camped in the state prepared and ready. They have rescued almost 200 citizens by Friday.

The situation in Nagaland is much worse than others. Continuous rain, floods and landslides have caused at least 12 lives and made thousands homeless there. Relief camps have been set-up all along the state.  Half Dozen NDRF teams have been sent off for rescue operations in Nagaland, as per the home ministry records.

The state government has requested the Centre for an immediate aid of 219 crores and are expecting for more after the expected visit by the inter-ministerial from Ministry of Home Affairs scheduled this week. The total damage in the state so far is 800 crores.  Though the amount of rain received is comparatively less than the previous years, the intensity of the rains is what caused this havoc.  Damaged roads are the major crisis here. Landslides disestablished connectivity to many of the villages and made it hard for the rescue workers. One of the worst-hit districts, Kiphere, which situates in our border with Myanmar, has lost its connection to other parts of Nagaland by road, which made it nearly impossible to bring provisions to them. However, alternative methods including airdropping have been used to provide basic necessities.